On Dispossessed Time and Its Suspension

Welcome to the third and final guest post on "The Arts of Noticing", edited by PPEH Graduate Fellow Pooja Nayak, a doctoral candidate in Anthropology and South Asia Studies at Penn. Our final post is by Larissa A. Johnson, a multimodal maker and Ph.D. candidate in Music and Africana Studies at the University of Pennsylvania, in which she reads 'having/making time' as a condition for 'being free', and reflects on how the audio-visual form helps her share these counter-representations of rest and play as attempts at "humanness where it is not readily given".

For other posts in this series, see Pooja's introduction, Part 1, and Part 2. 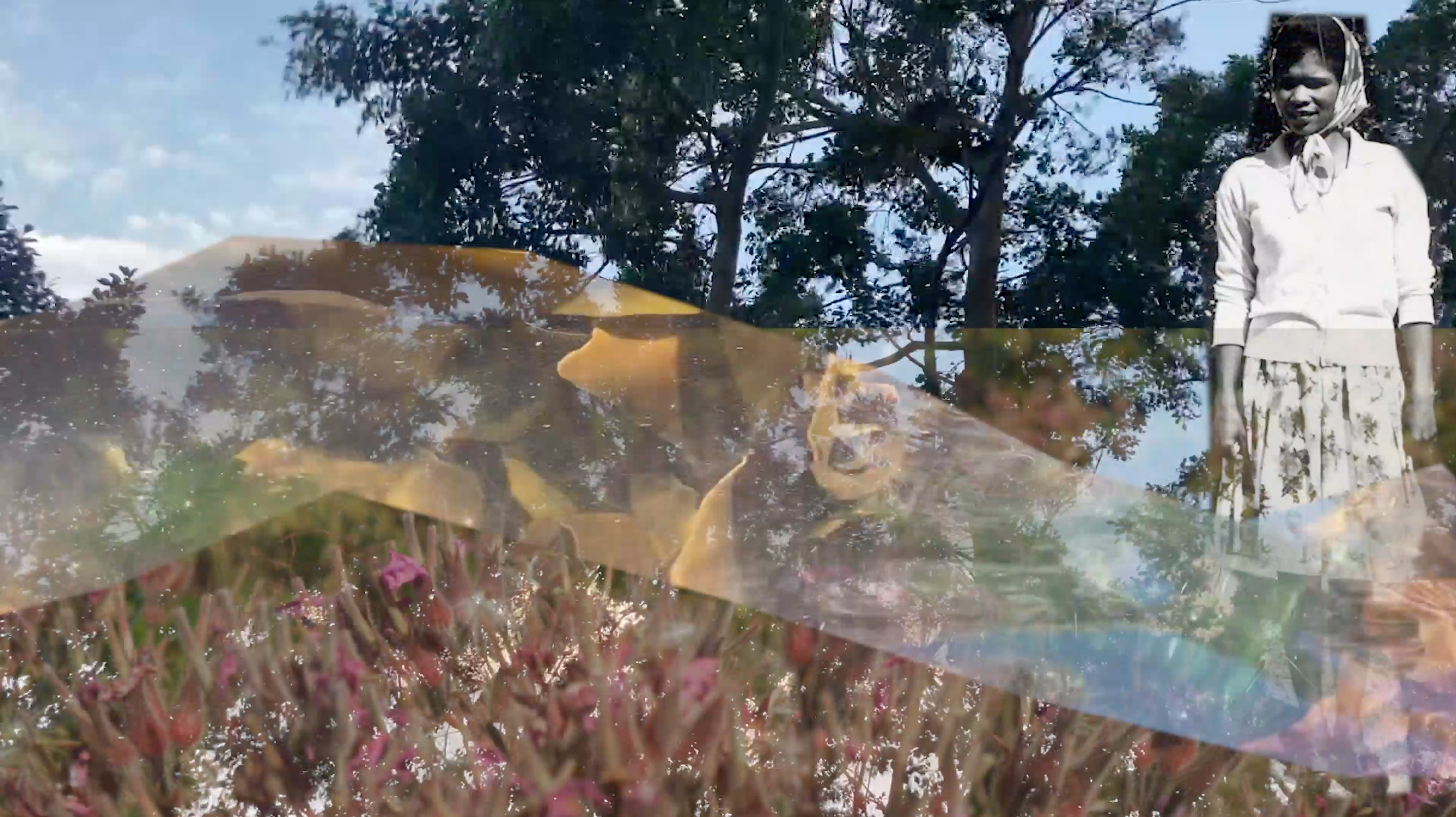 '"Ma visits me on the wind" video collage.

With this writing, I give some context to two recent audio-visual works, each of which is emergent of the concerns of my doctoral dissertation in which I think about land dispossession and the processes of deindigenization that are entangled with the real and abstract mechanisms of colonialism and apartheid in the places collected and reduced to the Republic of South Africa today.

Here, land is widely accepted as property to own individually, rather than as a resource to be shared among custodians. This philosophical orientation was fundamental to implementing the various imperial projects in South Africa since the sixteenth century. Emptying land of the people who shared it, and assigning portions of it as property to be owned by settlers, was the mechanism for stealing it.  Returning property to the people from whom it was stolen--as is the case today--cannot account for land dispossession, even while it might mitigate some socio-economic inequity.

While there is a progressive attendance to collective land claims, collectivity in practise often falls short of its legal imagination and doesn’t quite reach the idea of land as a commons to be used and cared for by all of its people. This latter orientation and the activities it realizes are ordered not by “the land question” but by separately categorized environmental protection legislation. In efforts to curb the apocalyptic environmental consequences of capitalism, the centuries old traditions of subsistence fishing around Cape Town--as one example--have collapsed under the pressure of license requirements that poor fishermen cannot afford. Concurrently, the state’s preservation of the magnificent peri-urban world of Cape Town, most especially Hoerikwaggo--“the mountain in the sea,”--within the boundaries of the Table Mountain National Park undermines the agential power of indigenous people to undertake rituals on their ancestral lands. 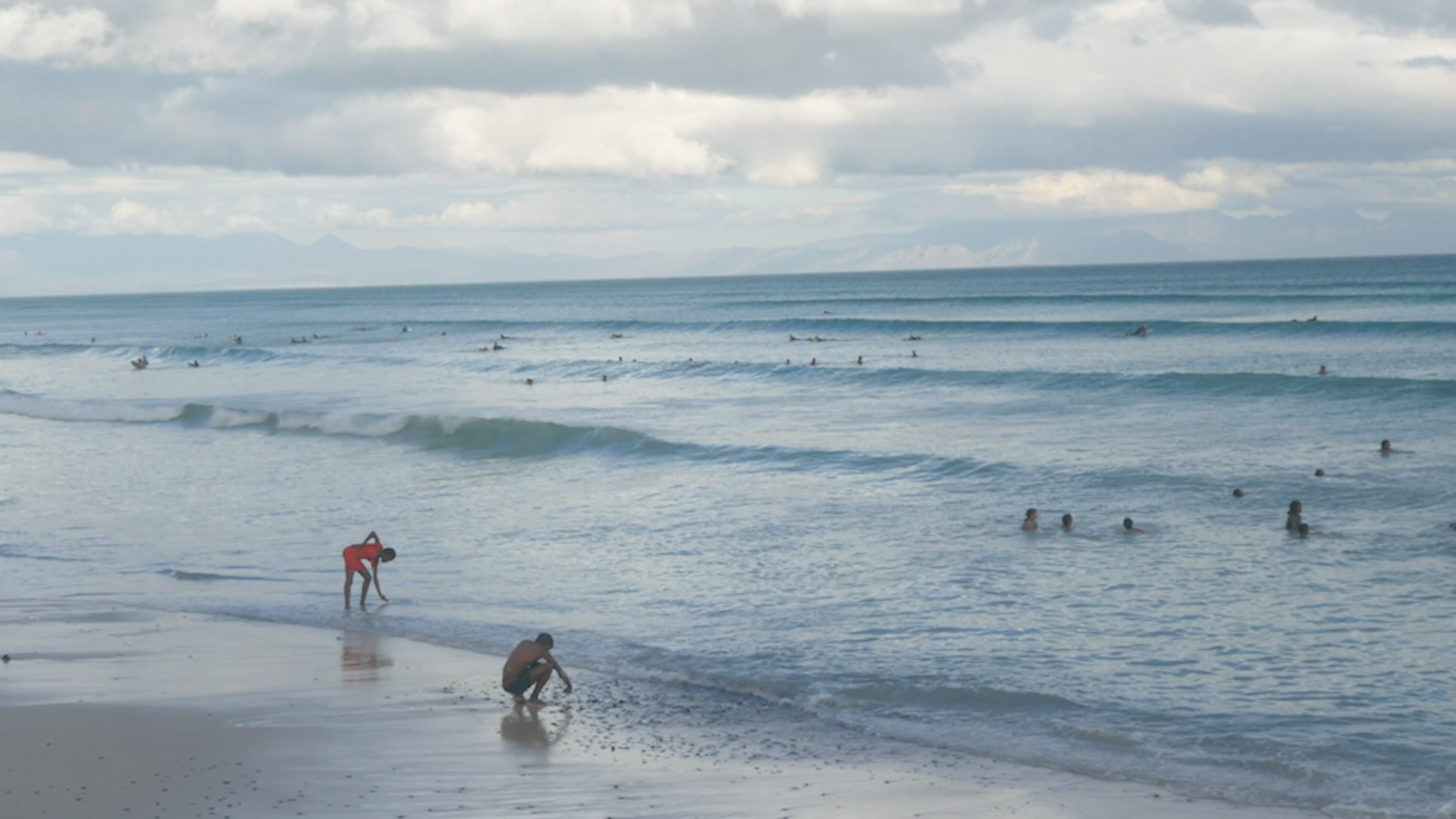 In my work, I think about these entanglements of colonial, apartheid and democratic histories and their real presence today as a social condition of dispossessed time, and try to imagine the possibilities for refusing these conditions when we emphasize having/making time as a significant condition for being free, for being human. I call these modes of being, knowing, and feeling that are incongruent with and undermining of colonial and apartheid logics as suspensions of dispossessed time to try to think about agency as a mutable state. The audio-visual works that accompany this writing try to frame these practises of/in humanness where it is not readily given.

On dispossessed time and its refusal is processual; I made it to help me organize layers of information and to illustrate how multimodal tools are useful in thinking. I try to mirror the suspensions I observe in the world in the piece’s form: visuals are paced in time-bending representations with multiple timelines moving at different speeds “simultaneously,” and people whose bodies are often used to visualize suffering are shown only in states of rest and play. This work includes a video collaging project--Ma meets me on the wind--in which I think of wakeful and sleepful dreaming as fundamental sources for indigenous knowing and being in the face of near extinction. I give the viewer a sense of this place at the level of texture as an attempt at sharing what it feels like to be here. There is no diegetic sound in this section: to encourage the viewer to meet me in that imaginary world, I include scenes that are noisy - whipping wind, trickling water, buzzing bees - intending for the viewer to apply their aural recollections to these visuals. 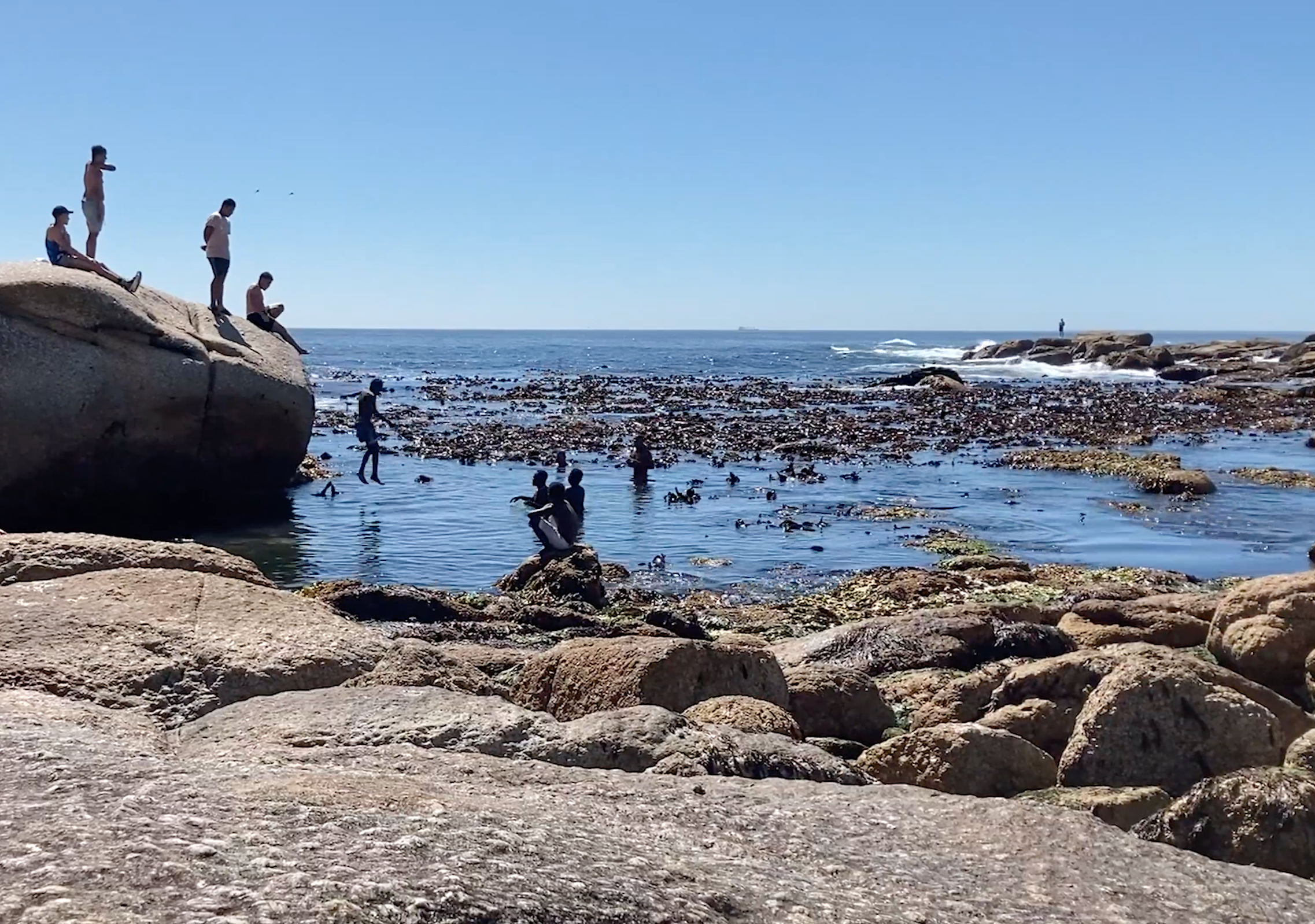 The most important methodological undertaking in these works is the displacement of sound from its visual source. As multimodal approaches to knowledge-making have emerged in powerful counterpoint with the supremacy of textual outputs in university settings, there is sometimes an implication that audiovisual media are inherently liberatory. I don’t believe that any mode of inscription has this capacity, in the first instance, and in the second, I think that this framing masks the ways in which these media have been employed to also do political work that is opposite to the project of liberation. Embedded in non-fiction filmmaking in particular is an assumption that what is depicted is an objective reality. Of course, there is no act of inscription that is not editorial, but this critical orientation to consuming information is easily undermined by audiovisual presentations because the author (the writer, director, and/or producer) is made invisible. What we encounter, in watching a documentary for example, are the bodies and voices of interlocutors “directly”; the space between the source and the argument appears smaller. This treatment of sound as an outing of filmic illusion is most clearly articulated in On suspending dispossessed time.

It is a performance-film in which you see and hear me playing musical mouthbows, one of the primary objects of my current work. This practise is almost entirely dictated by feeling, and the memorization and reproduction of that feeling. Mouthbow playing is incredibly important in the revival and preservation of Khoe, San, and relatedly Xhosa custom, and is a strong case in the suspensions I describe, in part because it moves between the exceptional and the quotidian. The recordings were made in one take, and I include sections with mistakes and sounds from the environment to simulate liveness. But again, mostly importantly, I dislocate sound and visuals that are records of the same moment in time. My intention is to produce a discomfort in the viewer that encourages questioning that returns them to the conceptual frame I lay out in the first six minutes of the work. The consequence is, I hope, two-fold: on one hand I am--as I describe above--exposing the illusions of realness embedded in these media, and on the other inviting the viewer to do work--to make connections, to interrogate assumptions, to sit with and go back--to understand. Ultimately, after demanding the viewer’s full attention, I refuse to offer a single narrative truth out of a desire to protect the autonomy and complex humanness of the collaborators whose images and voices fill these works, and to resist the scholarly impulse to reduce and universalize knowing. 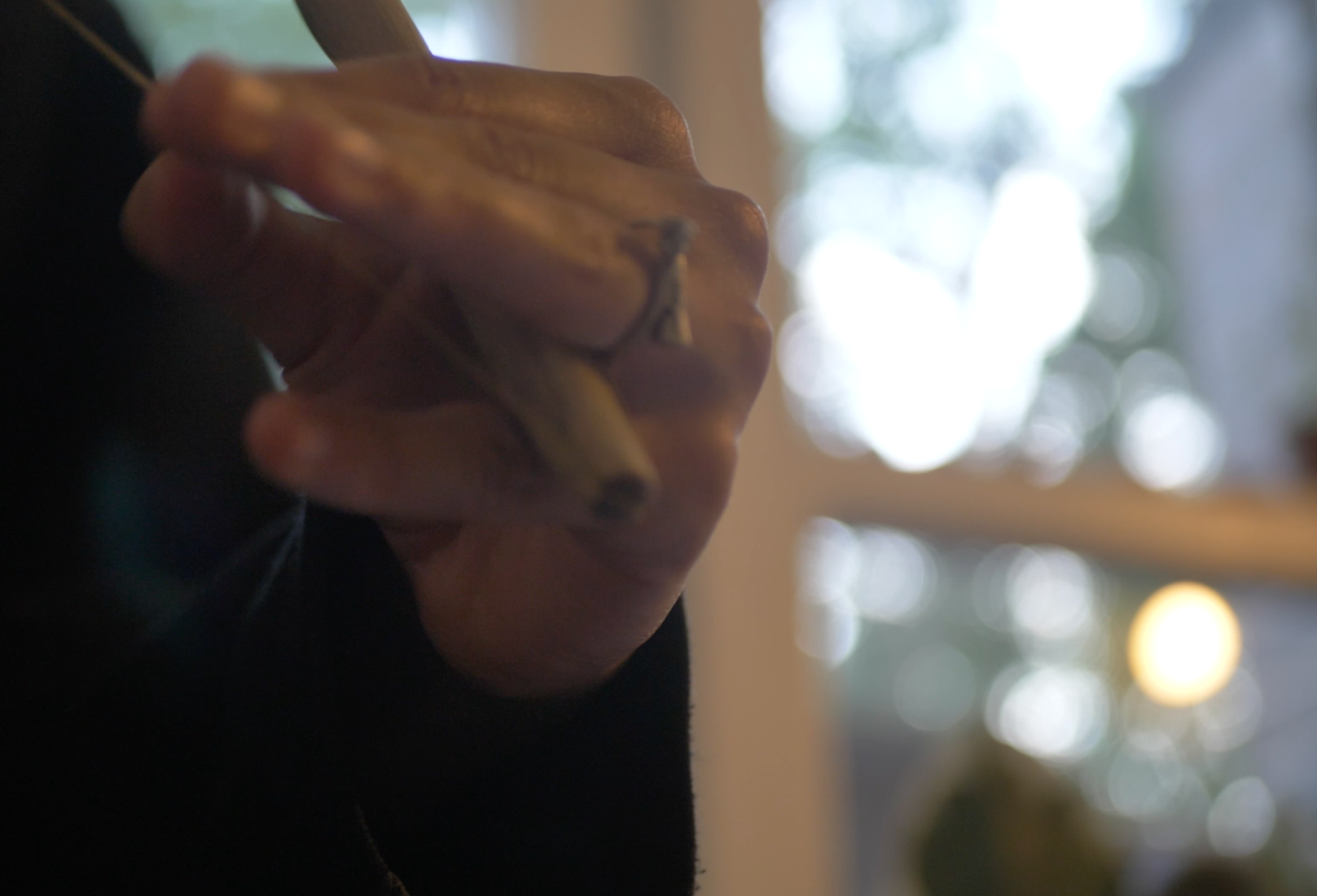 Running through the streets, Michausdal, Cradock.

Larissa Johnson is a multimodal maker and Ph.D. candidate in Music and Africana Studies at the University of Pennsylvania. Her dissertation project - concerning the entanglement of land reform and indigenous sovereignty in South Africa - is an exercise in methodological experimentalism with particular attention to embedding the argument in the inscriptive form. Additional projects attend to listening and subjectivity, radio and film in Africa, music and sound as analytic figures, genealogies of Black radical study, and the intellectual history of African(a) Studies. Larissa is a Benjamin Franklin Fellow and Fulbright Scholar, and her work is supported by the National Research Foundation in South Africa. She also posts about her ongoing work and writing on Instagram at lalabeijaflor.