Last year, on November 19th, 2020, Connor Hardy, Danny Cooper, Dr. Bethany Wiggin, and I led a climate storytelling workshop for the members of DoubleSpeak, a literary translation magazine run by Penn undergraduates. We prepared, as always, by carefully tailoring the standard My Climate Story workshop to our audience. With DoubleSpeak, that meant thinking through the existing parallels between climate storytelling and the art of translation. On the day of the workshop, DoubleSpeak members first learned what constitutes a climate story, and then they each wrote one in English, before beginning to translate it into a different language. We then went over the challenges of that endeavor in a constructive conversation afterwards.

In meetings before the workshop that I had with DoubleSpeak’s editor-in-chief, Heta Patel, ahead of the workshop, we returned repeatedly to one idea: that a climate story--a narrative about a person’s personal experience with climate change in a location with which they’re familiar--already is a translation: a translation of emotions and sensations into words. Furthermore, we felt that climate stories are often closely tied to place. Since place is also a nexus of language and culture for many people, the language in which a climate story is told can be a crucial part of the final narrative.

The online submission form for climate stories is already available in over fifteen languages, so that contributors can tell their climate story in a language with which they feel comfortable. But while preparing for the DoubleSpeak workshop, we began to ask ourselves: what happens when we experience a climate story in one language and then have to translate it to another? What is lost, and what is gained through that transformation? What gaps arise? What do we learn by translating our climate stories?

Over winter break, DoubleSpeak members had the opportunity to further refine the climate stories that they had started writing during the November workshop and then submit them to a Google Form. These stories will be collected until Friday, March 12th  and presented in a joint PPEH-DoubleSpeak publication later this spring.

Below is one example of a climate story in translation, written originally in English and then translated into Chinese by Chardonnay Needler: 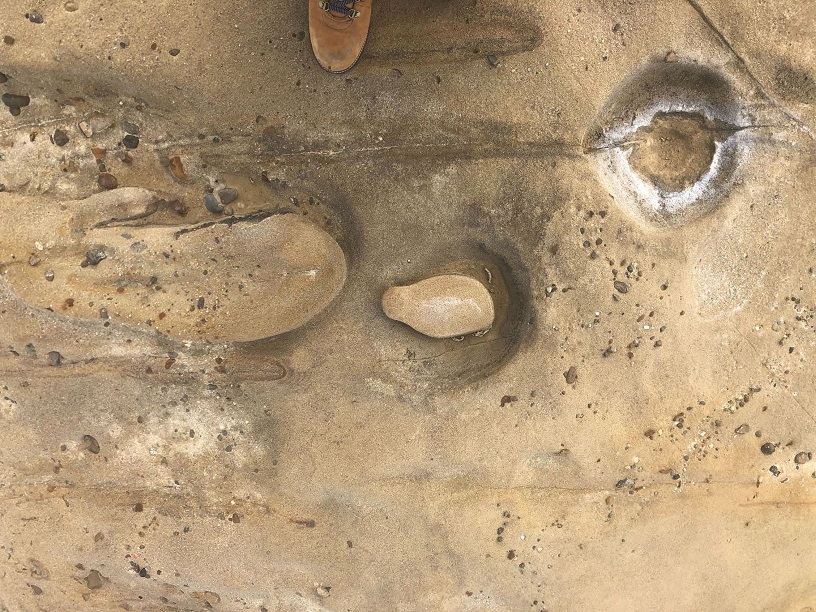 Looking down at the sand and rocks at Pebble Beach in Monterey, CA, where dried bits of oil wash up with the high tide. Photograph courtesy of Chardonnay Needler.

Rocks Have Oil, Too

I'm back. Back to the beaches of Monterey, where I've spent countless childhood summers dipping my toes in the cold water, running gaily as any girl can up and down the rocks — trying to find the crabs that reside within them.

My size 9.5 women's boots touch against speckled pieces of black—
Encrusted on the rocks.
I do not remove my boots.
I do not tread gaily on these rocks.
I do not see any crabs, at least not any living in these micro-crags.

Black oil,
The black of calligraphy ink
Drips across stones of time immemorial.

God is not the only painter.
Man's graffiti covers.
Man covers even the never-has-lived

I traverse these stones,
Trying to escape the rising waves.
Why won't the water stop rising?
Why is it chasing me?
Why are the grey and brown stones becoming blotched with
Botched by
Black oil?

Big Sur is empty, and I am still asleep on the sand, the same place I'd fallen at.

The sea mist softens everything;
there are no masts;
there are a myriad of birds on a rock in front of me;

there is a family of seals: the daddy seal emerged tirelessly from the depths, a fish in his mouth, glistening and devoted.

Little seal, don't open up your mouth to your children and say, "You've got this!"
Humans, don't add any more oil.

Chardonnay’s accompanying translator’s note reads, in part: “加油 is Chinese for ‘let's go!’ or like ‘you've got this!’ But it literally means ‘add oil’ — and this entire poem is about how I've seen oil overpower the rocks that I'd call home back in Monterey, one of the only areas that I've consistently visited my whole life.” This kind of resonant double meaning is one of many ways in which the art of translation can capture the nuances of a climate story - many thanks to Chardonnay Needler.

The submission form for climate stories in translation is still open. Submissions will be accepted until Friday, March 12th.