Cultures of Sustainability: Winter Dispatches from a Summer in Berlin and Rotterdam

This is a guest blog post by PPEH Faculty Working Group member Simon Richter and student Brea Watkins, who was this past summer's recipient of the PPEH Travel Fellowship to participate in the Penn in Berlin and Rotterdam Program.

Introduction by Simon Richter, Professor and Chair of Germanic Languages and Literatures

Sustainability is not just a matter of science, engineering, design, and policy. As the nine Penn undergraduates who participated in the Penn in Berlin & Rotterdam Program in the summer of 2019 discovered, there are distinct cultural and national differences in the ways in which sustainability is implemented and practiced. After a crash course in the German energy transition, Dutch water management, and their respective cultural histories, we spent two intense weeks meeting with some of the leading figures in Dutch and German sustainability and climate change politics and touring important sites in the Netherlands and Germany.

With extensive exposure of population and assets to the effects of sea level rise and climate change (around 26% of the country is below sea level, another 29% subject to riverine flooding), the Netherlands are “all in” in a way that few other countries are. What struck us most is the remarkable buoyancy and optimism of the Dutch, their conviction that every problem is an opportunity and that multiple problems in combination actually increase the possibilities for winning broad approval for innovative and substantial interventions. As the Dutch expand their sense of global responsibility from a tight focus on water management to designing sustainable cities, shifting to e-mobility, and achieving their own energy transition to renewables, the Netherlands will be a nation to watch.

Throughout the first decade of the twenty-first century, Germany led the way with its Energiewende, its ambitious, systematic turn to renewable energy for generating electricity, combined with a nuclear phase-out. The provision of feed-in-tariffs in the Renewable Energy Act created optimal conditions for rapid implementation of citizen-funded PV and wind turbines. This was energy democracy in action. Now, however, Germany’s Energiewende is losing momentum. The next steps (phasing out coal, de-carbonizing the transportation sector, achieving greater energy efficiencies, greening industrial agriculture) are clear and have broad public support, but are not being expressed in policy. Will German voters and social movements once again press politicians to stake out the future? It’s hard to say, but one thing is sure: when the energy history of the Early Anthropocene is written, Germany’s accomplishments to date will stand out.

Below, PPEH scholarship winner Brea Watkins (COL 2022) reflects on her experience participating in Penn in Berlin and Rotterdam. Every student has a role to play during the trip. Brea was on the social media team, which created a daily video recap (you can find the videos on Facebook). At the end of this blog you’ll find a link to a mashup of the entire trip.

Penn Summer Abroad in Rotterdam and Berlin was an educational and entertaining summer experience. Thanks to the PPEH Scholarship I received, I was able to join eight other students on an amazing trip abroad. We met policy makers, scientists, engineers, architects, and activists--all fighting for sustainable policy and change. The trip was split in half over two weeks between the Netherlands and Germany. During the Netherlands part, we stayed on an amazing houseboat, in true Netherlands fashion, to emphasize how the people there interact with water every day. In Berlin, we stayed in a stylish dorm in Kreuzberg. 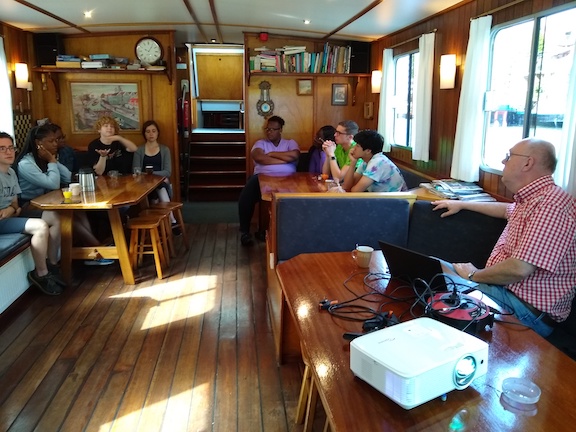 Discussing "Room for the River" with Hans Brouwer on our housboat

Everyday we met with people who are currently working to address the climate issues their region is facing. The video showcases our very rigorous daily activities. We met with a variety of professionals and experienced presentations and lectures. This trip was comprised of experiential learning by getting tours of many different facilities, such as the Floating Farm in Rotterdam or the Maeslant Storm Surge Barrier, as opposed to sitting in a classroom learning about sea level rise in the Netherlands. By going on excursions to places like the Floating Farm, we learned from the founder himself, Peter van Wingerden, that imminent sea level rise in the Netherlands will create many problems, such as impacting agricultural areas. So, Peter’s solution was to create a floating farm that could be used in many areas worldwide that will experience flooding but still need to feed large populations. 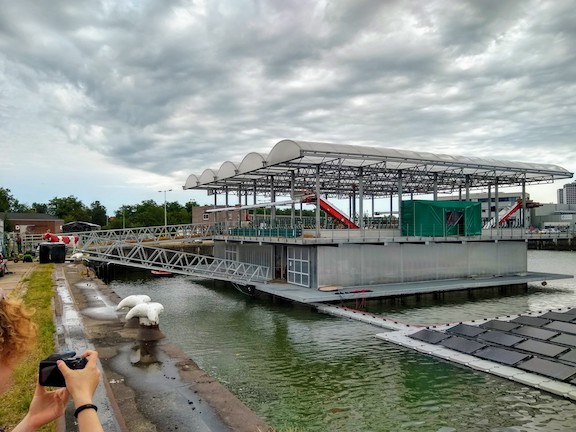 In Germany, we met with Ralph Hartmann from the Öko-Institut and learned about the German debate surrounding the use of coal. It is a job provider and currently supplies around 45% of Germany’s electricity, with solar, wind and other renewables comprising the rest. Currently, Germany has a plan for a complete coal phaseout by 2038.

After getting an incredible base of knowledge we traveled to the Eberswalde University for Sustainable Development, Faculty of Forest and Environment. Here we used our knowledge to have a cultural discussion with German students about the differences between German policy and public opinion compared to the United States. The energy policy regarding fossil fuels in these two countries is very interesting to e because of the completely different approaches. It’s a little mind-blowing that two large nations, both post-industrial and wealthy, have such different approaches. 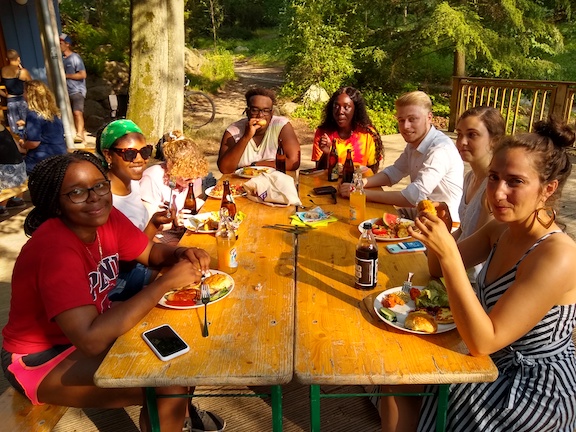 Brea and fellow Penn Students dine with students at Eberswalde

We also toured EUREF Campus, a Berlin start-up community, where we visited a wide range of companies creating solutions for problems in the near future. One explored renewable energy and the technology needed to support a complete transition to electric vehicles.

The video below provides a great overview of these educational outings. There was so much we did that if I had captured it in longer clips it would be hours long. This was an amazing trip.