At PPEH, we've long been curious about how play and games might encourage environmental inquiry.  So often environmentalists can seem such insufferable know-it-alls! But what's the role of play in times of crisis? These were questions we brought to conversations with 2019 artist in residence, Rod Coover, seasoned VR filmmaker Peter Decherney, and environmental game designer Dargan Frierson. The more we read about virtual reality and gaming, the more we wanted to explore the potential for extended reality technologies to tell environmental stories, to generate empathy in users, and to catalyze action on climate and other urgent environmental issues.

A year of planning later, on November 21-22, 2019 -- and with generous support from the Office of the Vice Provost for Research, Penn’s Cinema Studies Program, and the Annenberg Center for the Performing Arts -- we held a two-day festival, Environmental Storytelling and Virtual Reality, to do just that! 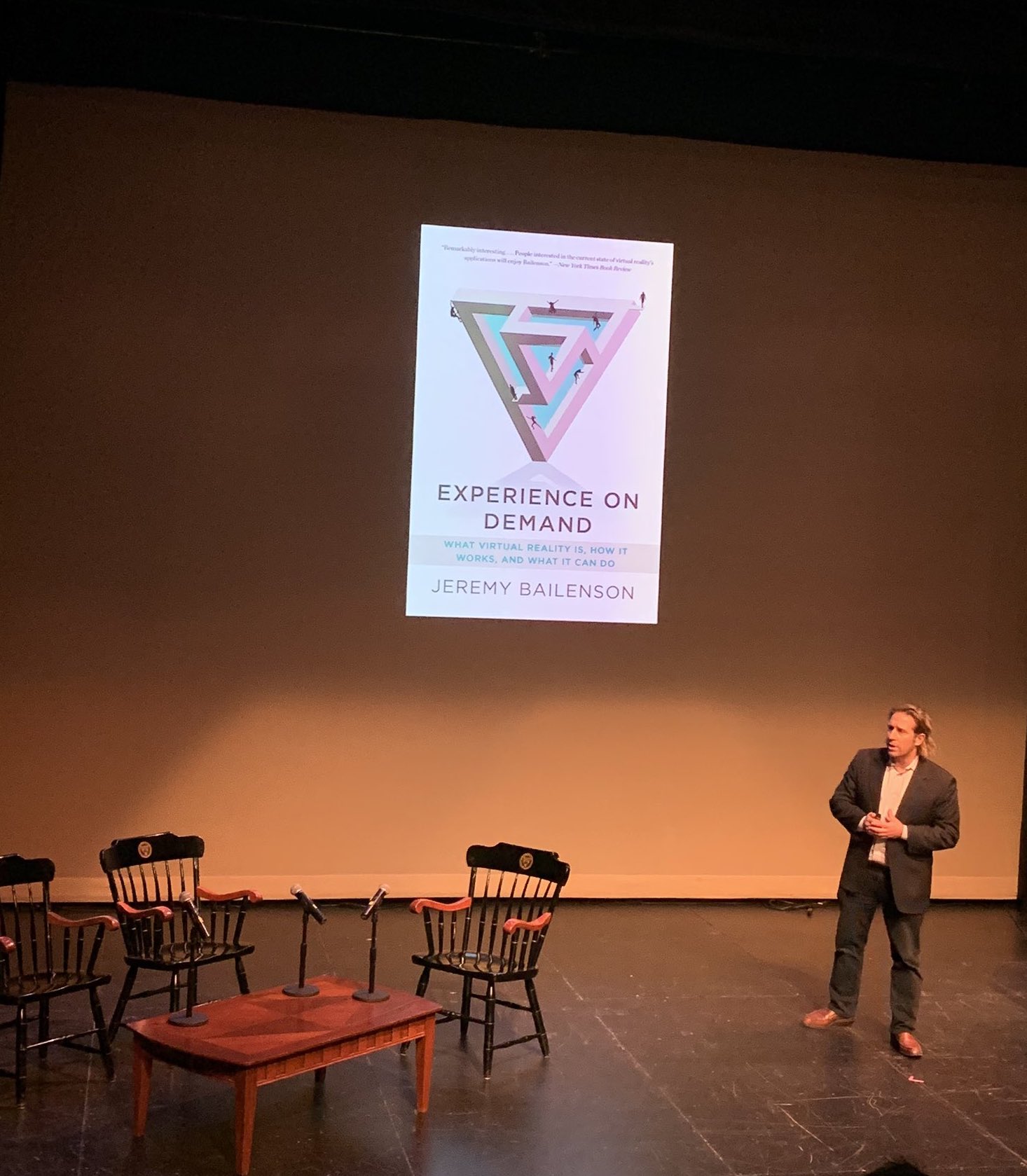 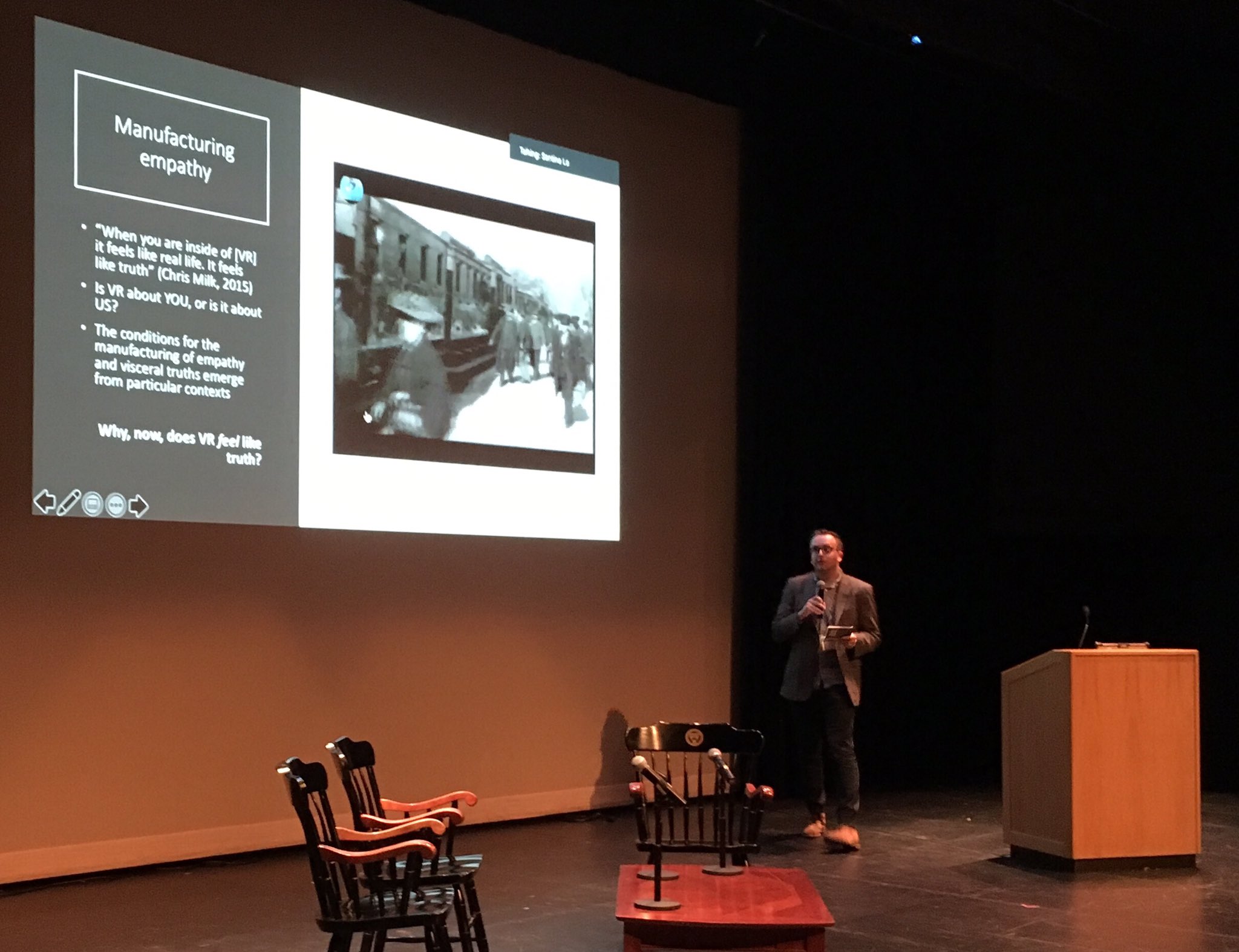 In the panels that followed, Annenberg Communications PhD candidate Zane Cooper, took up the empathy theme, advocating for a move beyond “the paradigm of personal feeling” in VR art toward an understanding of immersion and “visceral truth” as “culturally and politically contextual.” In his own project, Alchemical Infrastructures: Making Blockchain in Iceland, Cooper has worked to harness 360 film’s unique ability to capture both the seer and the seen in the same shots -- offering new possibilities for ethnographic practice and a kind of ethics of positionality. Sarah Cameron Sunde, who joined us by videoconference from Nairobi, described the analogue and embodied immersion of her multi-site performance work with tide cycles. She shared images and video from her seventh and most participatory 36.5 durational performance to date -- completed just over a week prior on the southern Kenyan coast.

We were also treated to a conversation between Peter Decherney and the San Juan based art duo Vientre Compartido -- twin brothers Javier and Jaime Suarez -- with highlights from the 360 film they are making together, “The Heart of Puerto Rico” in the wake of Hurricane Maria. VR has proved a valuable mode for capturing the Suarez brothers’ art practice, which they describe as “multi-species collaboration,” and which unfolds over time and in context, hinging critically on its interaction with nonhuman species and natural processes. 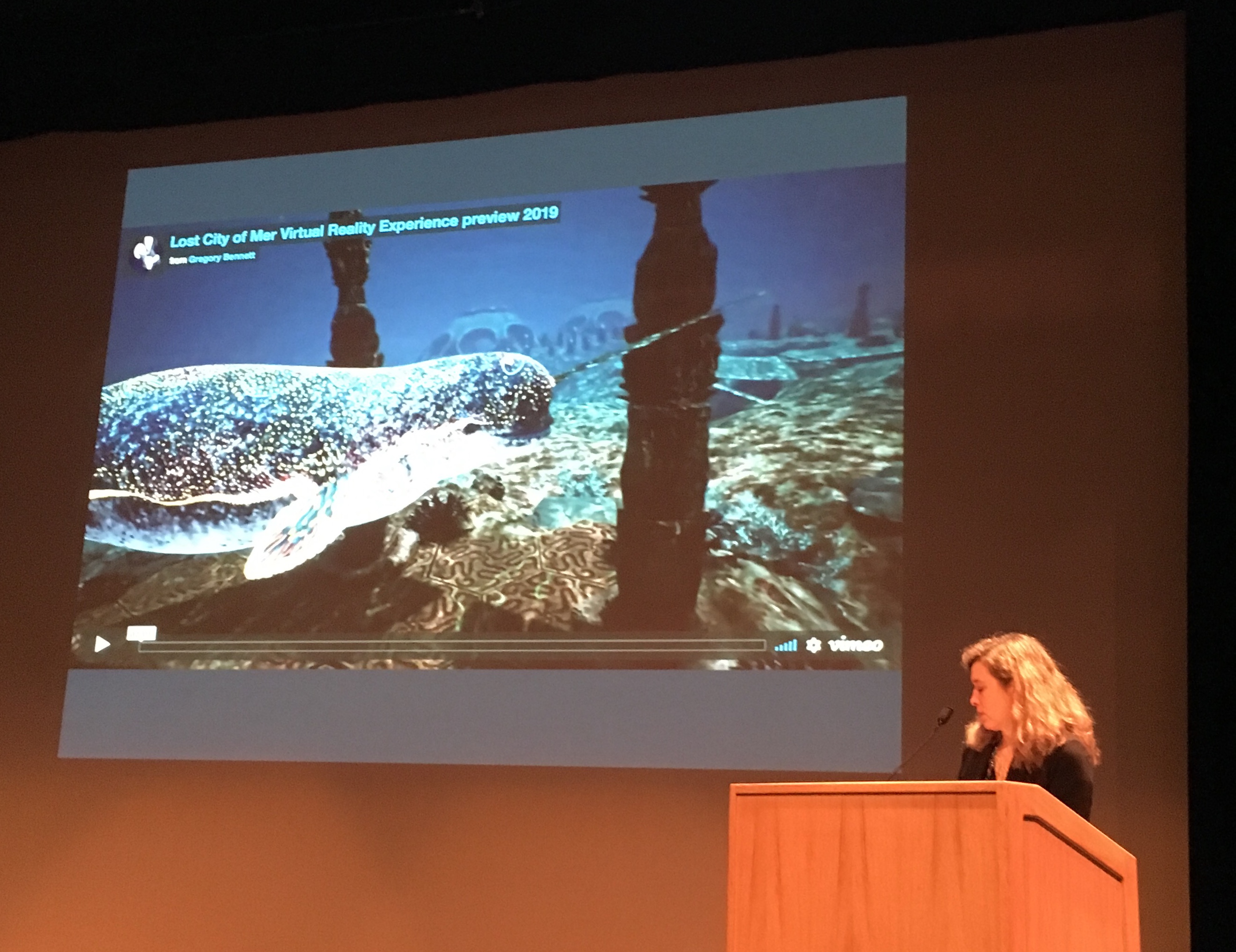 The final panel of the festival’s first day focused more explicitly on XR in motion and engaging the playful and fantastic, with presentations by Rachel Stevens and Liz Canner. Stevens offered insights into the process of creating a site-specific AR experience dependent on movement through a particular geography -- what PPEH lab fellow Knar Gavin called “psychogeographic engagement” with the once decimated oyster populations of the estuaries surrounding Governors island in New York city. Canner walked us through her award-winning animated VR experience The Lost City of Mer with its fantastical storyline grounded in real data on coral ecology, ocean warming and acidification. While Canner’s project offers an immersive experience in a fictional underwater world, it also includes an associated app which tracks and reward users’ actions in the real world toward reducing their carbon footprints.

The second day of the festival shifted toward hands-on, interactive sessions, giving participants the chance to experiment and play with VR filming and game design and to try out many of the experiences discussed in the previous day’s talks. (Scroll through some images from the sessions below) 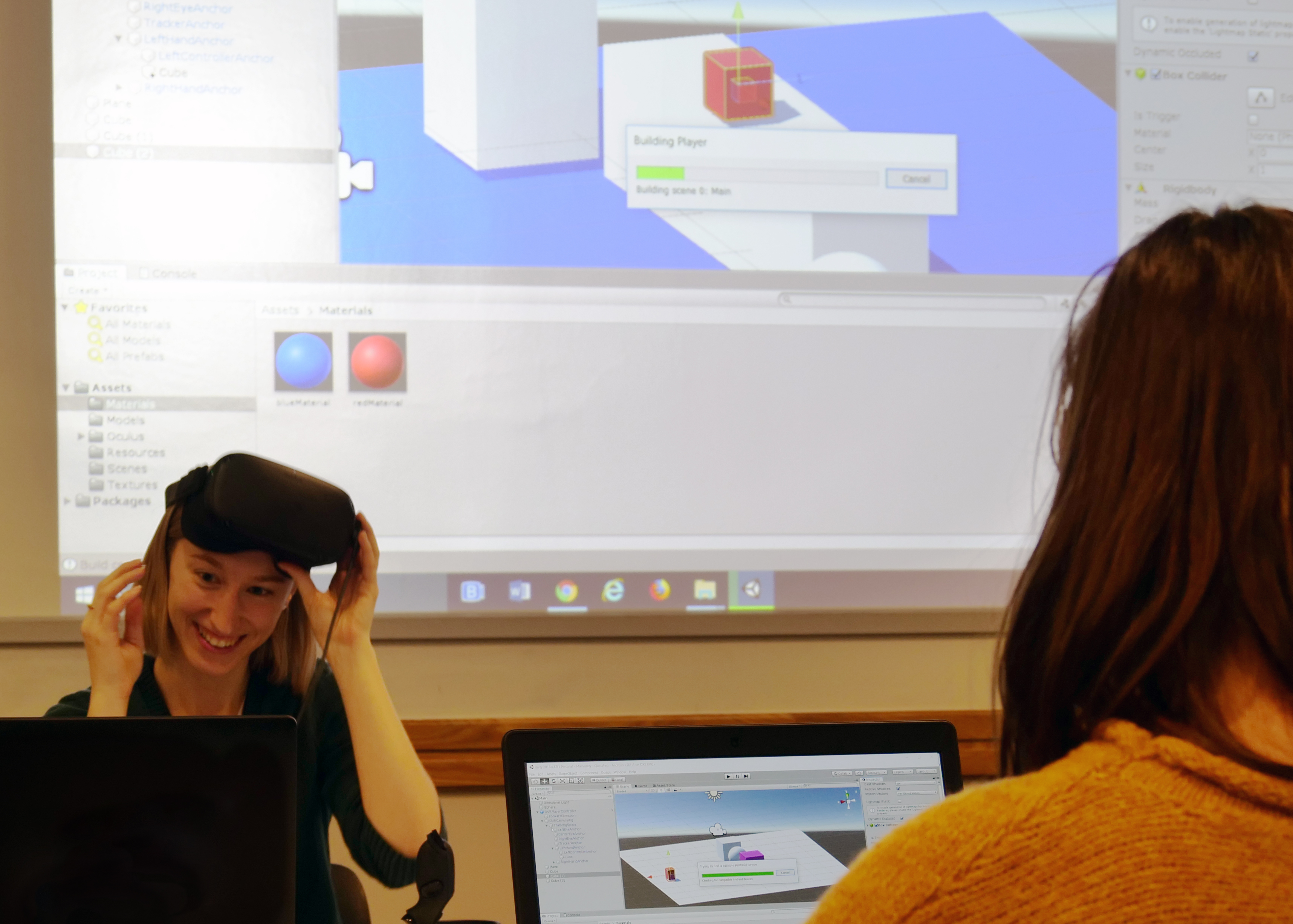 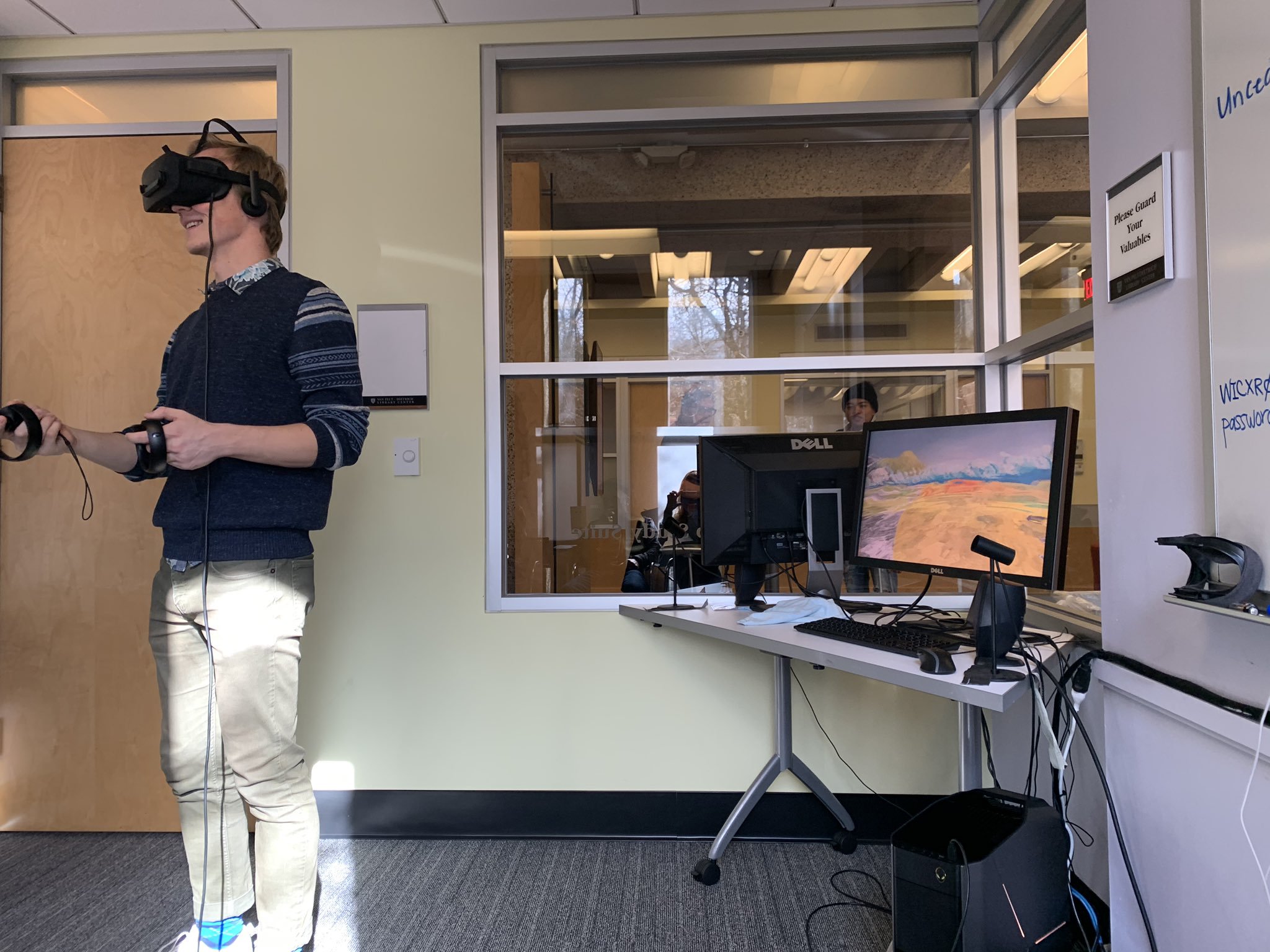 The afternoon included a panel discussion with Earth Games founder Dargan Frierson, immersive theatre and game designer Jessica Creane, and members of Penn’s student SIGGRAPH group, which opened into parallel game design workshops. Frierson, who videoconferenced into the panel, had the following to say about the experience of participating remotely:

“It seems appropriate that a workshop on virtual reality would include virtual visitors.  Beaming
into the panel from my office in Seattle saved 1.3 tons of CO2 emissions, and I felt like I was right
there in the room during the panel discussion.  Afterwards, thanks to some patient laptop porters,
I was even able to participate in Jessica Creane’s breakout session as an active part of a team!

I spoke about the urgent need for more voices from the humanities to speak about climate change, and the unique aspects of the game as a medium, based on my experience with the EarthGames group. Games can let us visualize the invisible or travel in time, to see the consequences of environmental degradation more immediately. Games are deeply immersive, so can have particularly resonant narratives when constructed well. Myles Al Yafei and Caroline Lachanski’s 3D game brought historical periods and environments to life in a way I’ve never seen before.

I’m particularly intrigued by the idea of making games that allow the player to craft better futures, or imagine the world in different ways. Jessica Creane’s brilliant site-specific experiences for groups visiting National Parks opened my eyes to the possibilities of games to help create deep connections with the world around us, and share unique experiences within groups of players.

I love the intensity of the game jam experience, and each year EarthGames co-hosts the Games for Our Future jam, where we task participants to create games on topics like the Green New Deal, or mental health and the environment. In her mini-jam at the workshop, Jessica had us make different elements of board games, like the board, characters or game mechanics, while building off of the work of other teams. I’m very thankful for my team members, who in addition to having wonderfully creative ideas about environmental games, also carried the laptop around the room so I could participate virtually.” 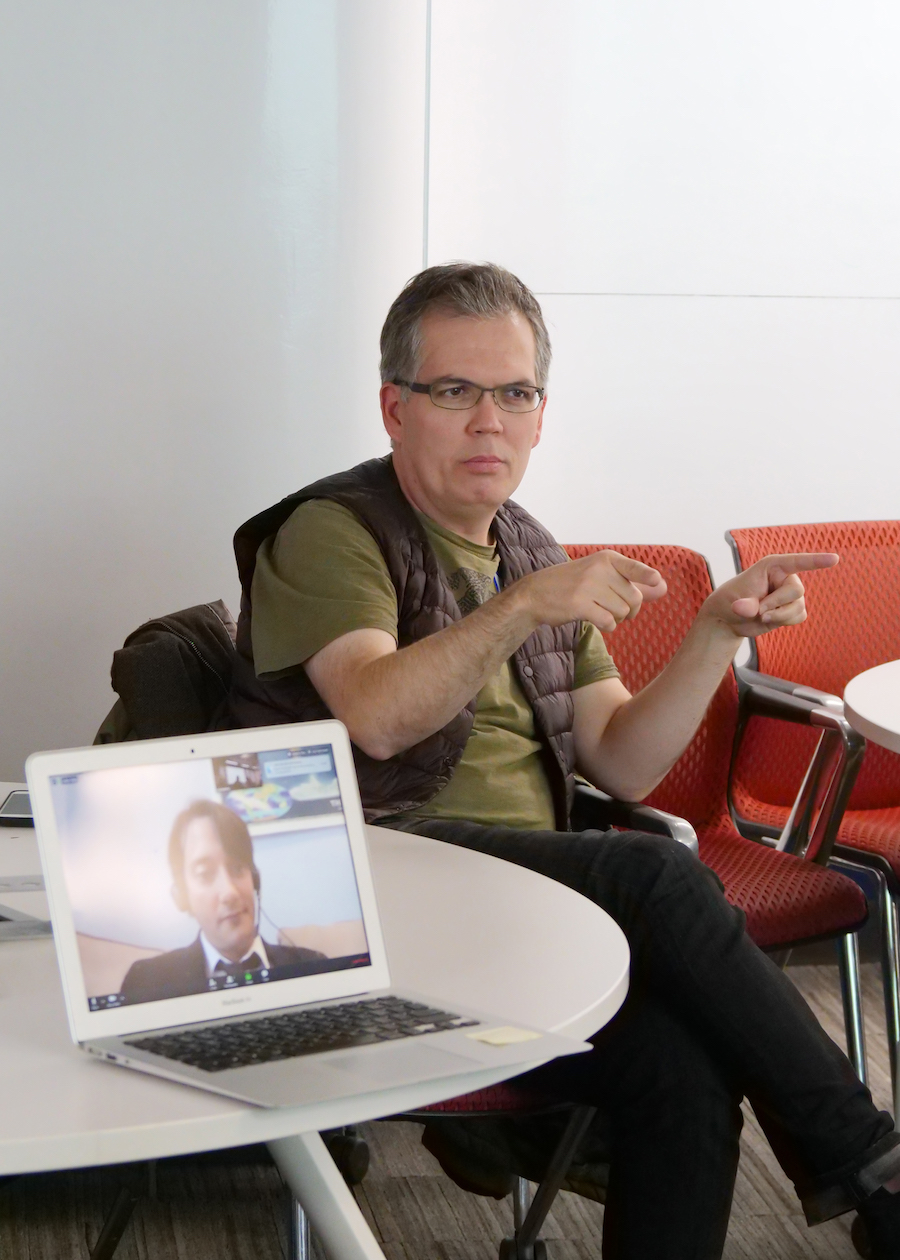 The final event of the two-day festival was also the culminating event in our 2019 artist-in-residence Rod Coover’s residency with PPEH: the premiere of his multimodal performance The Altering Shores. Combining stunning imagery across three screens with live music performed by singers and instrumentalists moving across the stage, the performance also featured the on-stage involvement of a small group of pre-chosen audience members who were given minimal instruction before being thrust into the environment created by the multi-screen video and live musical performance. In a recorded conversation between several of the audience “performers” (which will also feature in our next Data Remediations pod), Philadelphia writer and local historian Nathaniel Popkin reflected on the experience of moving across the stage:

“You didn’t know really whether you were a participant or whether you were an observer or an
observer being observed or what you were supposed to observe. The video installations were
visually really interesting and the sounds and the music that was being played was really quite
beautiful at times and also upsetting at other times. So you couldn’t be sure whether you were
supposed to be absorbing all of this, taking it in as an audience member, analyzing it, reflecting
on it, and at the same time you were trying to figure out who you were among the group of other
people… It occurs to me that as we face radical ecological crisis where systems begin to shut
down and become overwhelmed and nature splits out of balance, we are aware of it, we are
watching it happen and we are living in it at the same time, trying to understand our social
relationships at the same time. So it was really an interesting version of reality, though it felt
nothing like reality at all...

“I think that one of the key things that came out of this performance, and this is why my
favorite part was the chemical names... is the facing [our environmental crisis], is the facing the
realness of it, is the looking at it, looking at it and focusing on it, and thinking about it, and
reflecting on all that stuff which is really beyond our comprehension.. And then from there...
dealing with it, scripting what you’re gonna do next. Otherwise we’re gonna go crazy.” 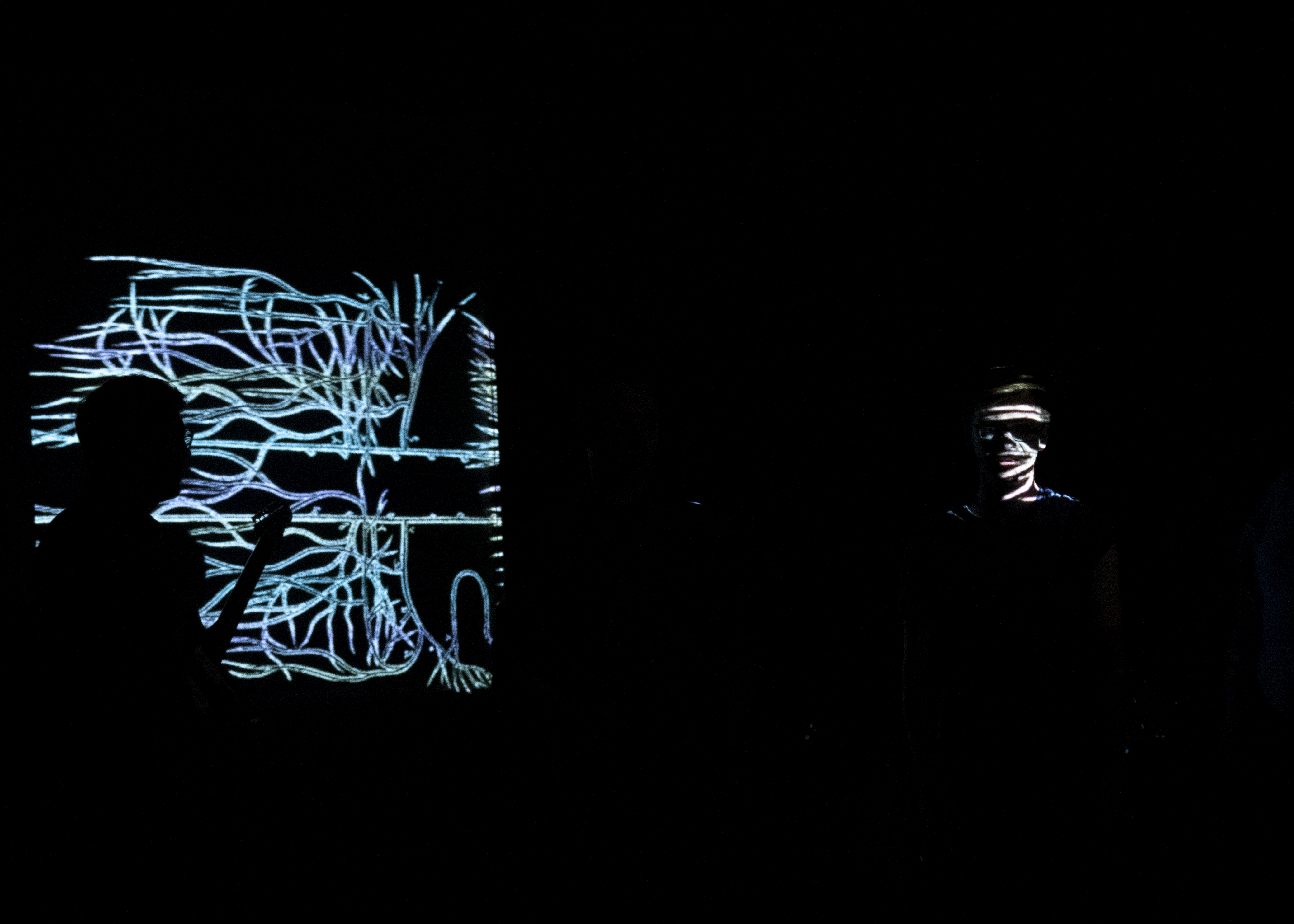 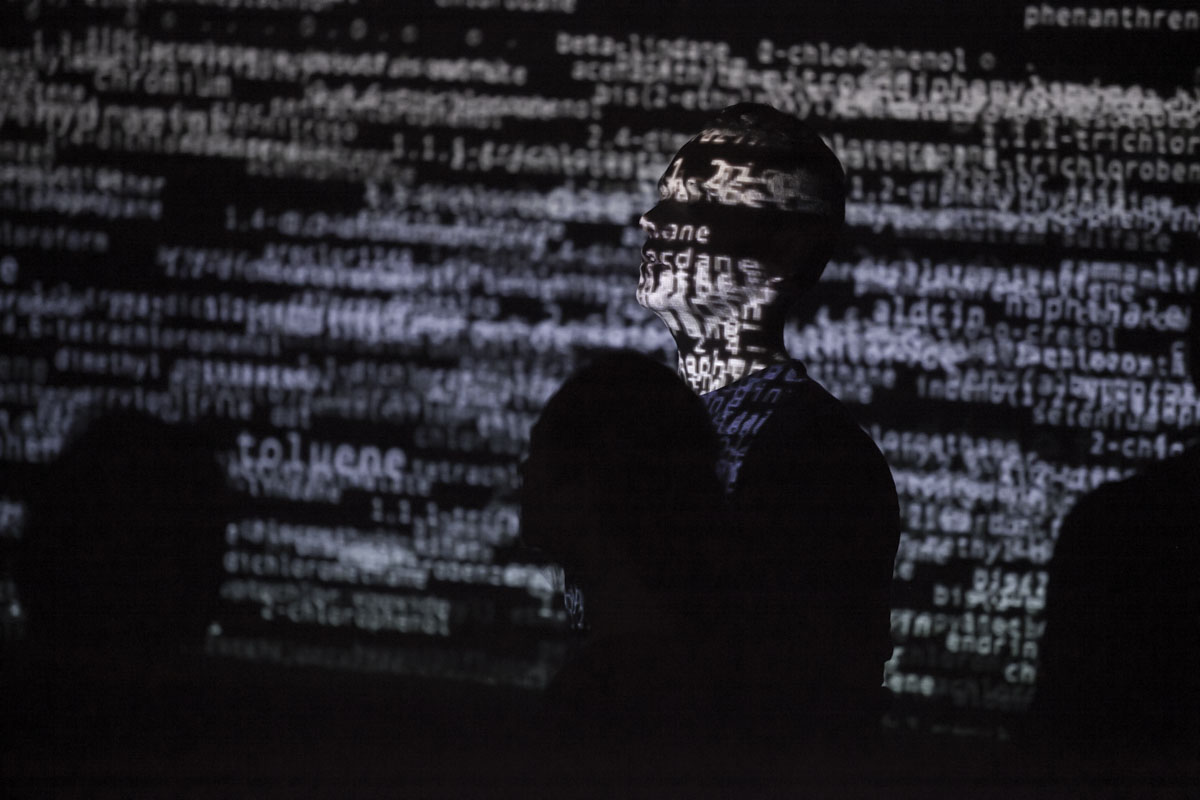 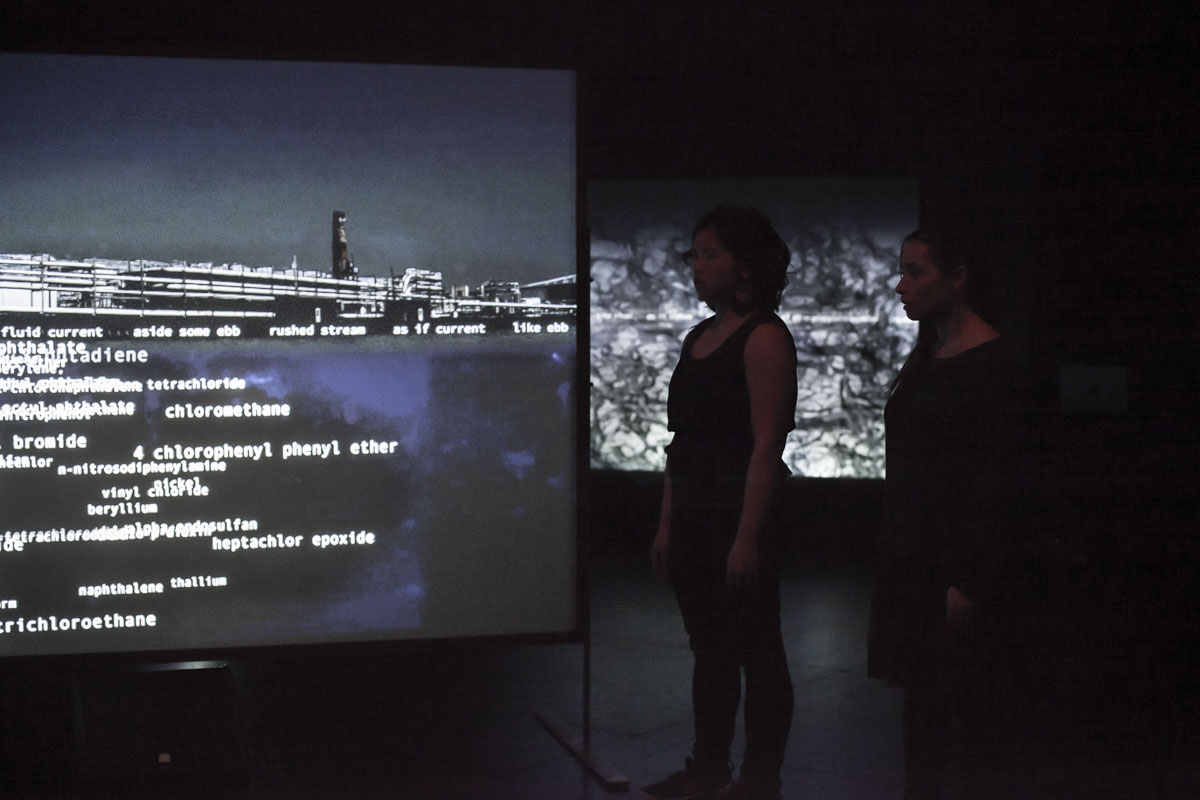 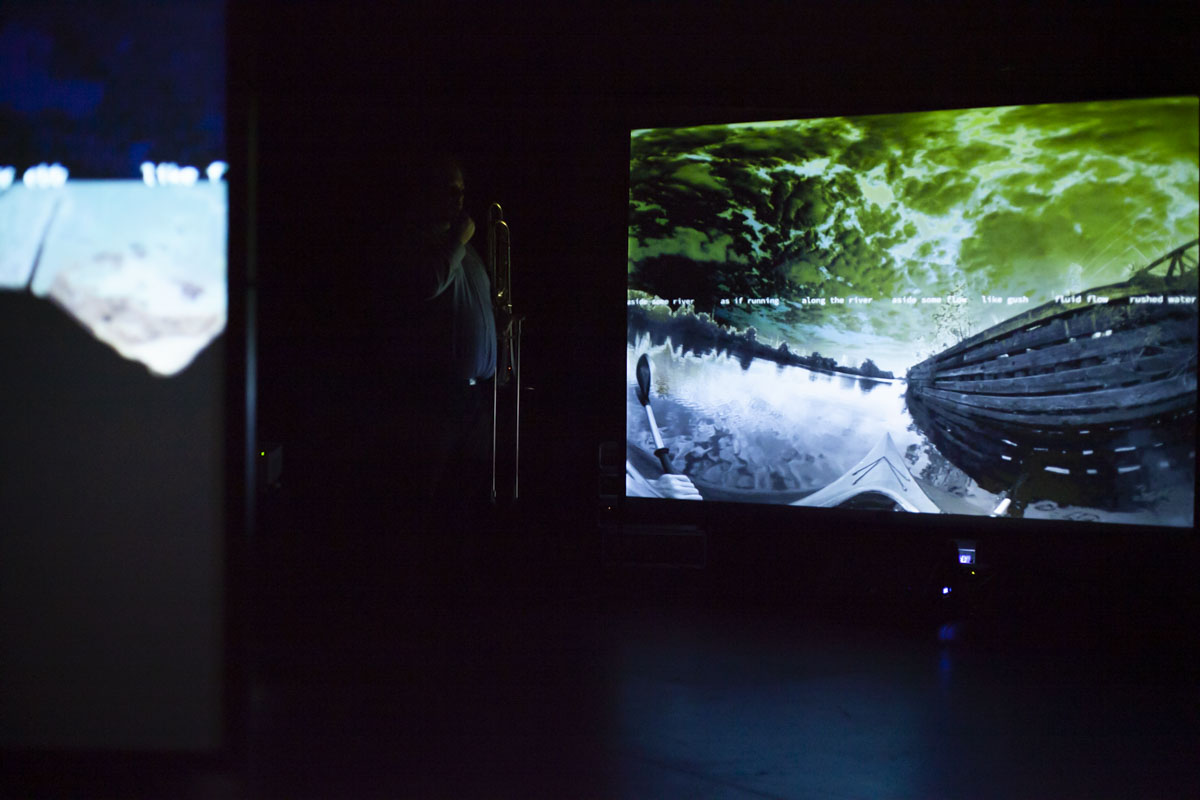 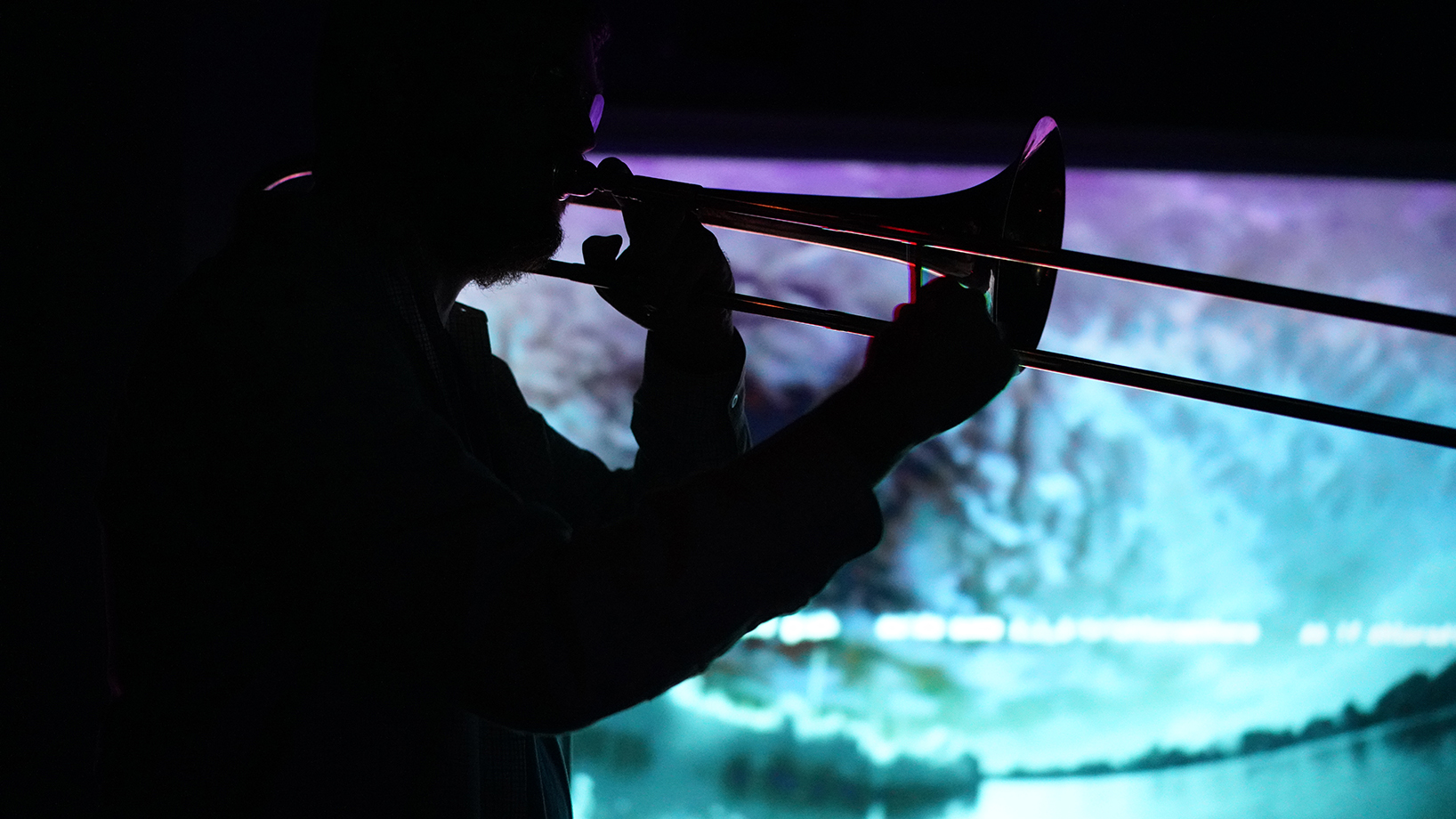 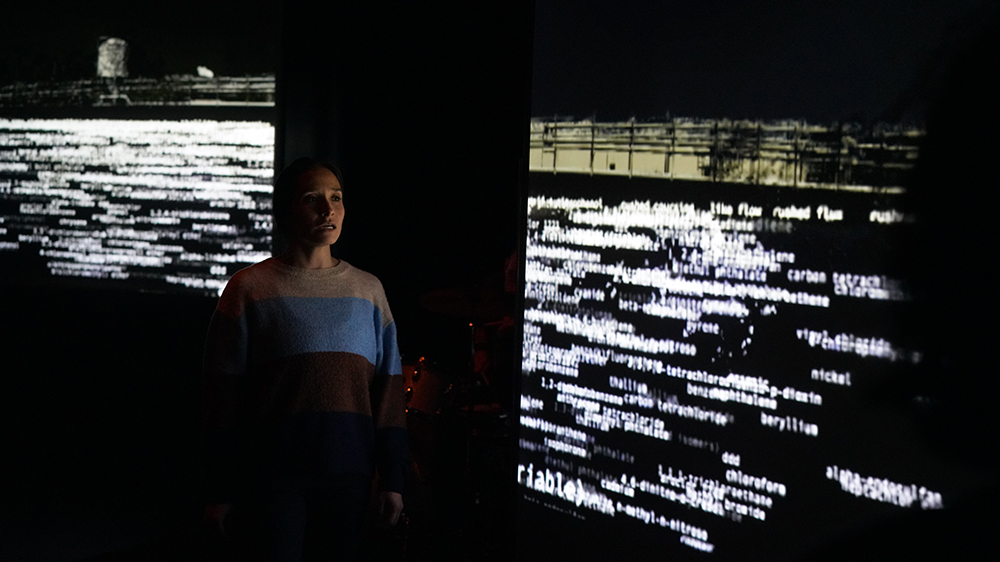 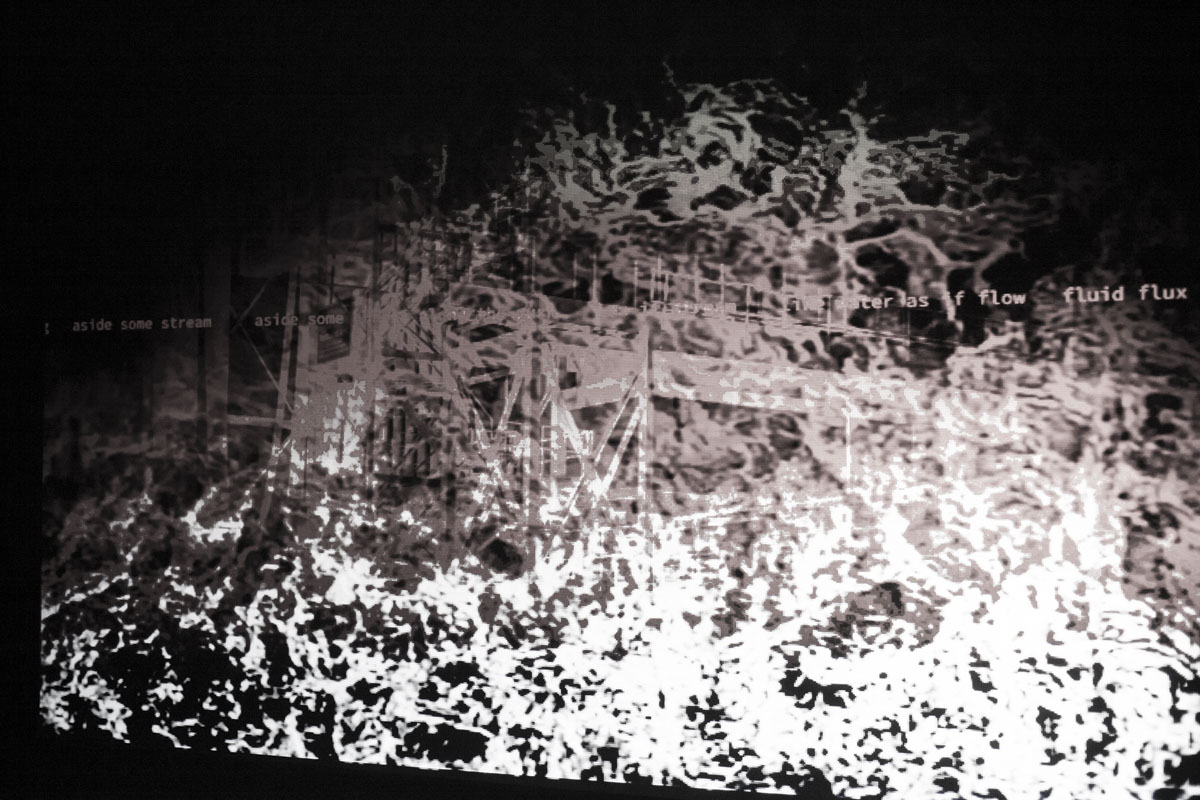