In just a few days, Tracy and the eleven other teachers in the seminar will submit their final projects for our 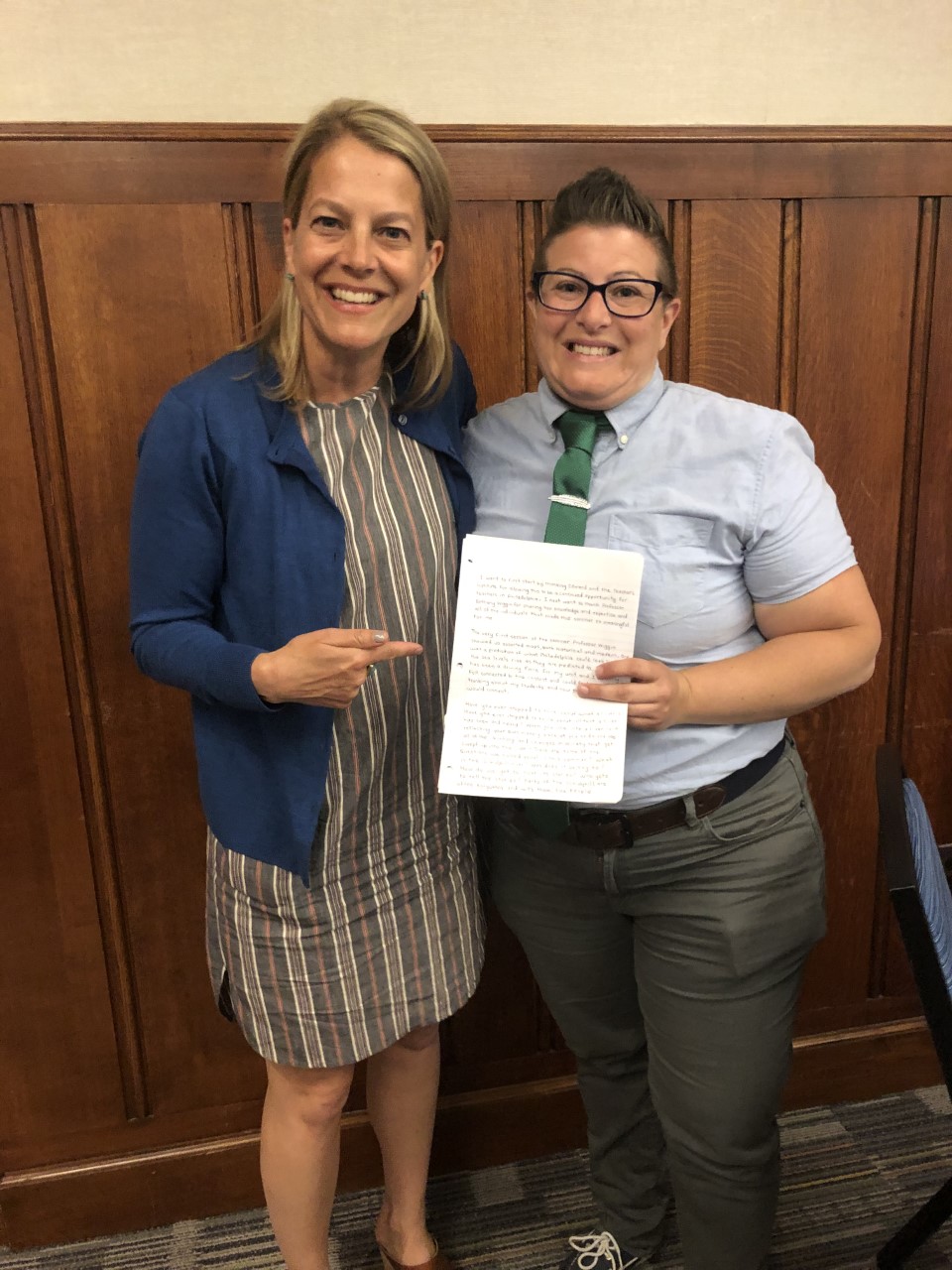 seminar, each a set of lesson plans that adopt and adapt our TIP seminar’s materials for their own classrooms. All will be made publicly available for other teachers similarly to adopt and adapt, via the TIP collection of curricular resources as well as via PPEH’s growing Schuylkill Research Corps Archive. The curricular units collectively aim to foster students’ care of our urban environment and connect them to our waterways. As another TIP Fellow and EH seminar participant, chemistry teacher Bobby Stewart, notes, “Currently, there is no mention of the Schuylkill River in any component of the Philadelphia School District's science curriculum--not even in the course on environmental science.”

On May 21, 2019, Tracy presented the following remarks at the 2019 Teacher’s Institute of Philadelphia celebration. They have been lightly edited for clarity. Tracy has already piloted portions of her lesson plans, adapting our seminar's exploration Philadelphia's waterscapes at 2100 under different scenarios of carbon emissions and sea level rise. Included in the image carousel below are the Google Earth data visualizations of Philadelphia in 2100 that Tracy and her students explored in their ongoing attempts to consider how our city will look and feel, if we humans, as a species--globally, nationally, and regionally, across public and private sectors--continue our failure to take meaningful action to reduce our carbon consumption. 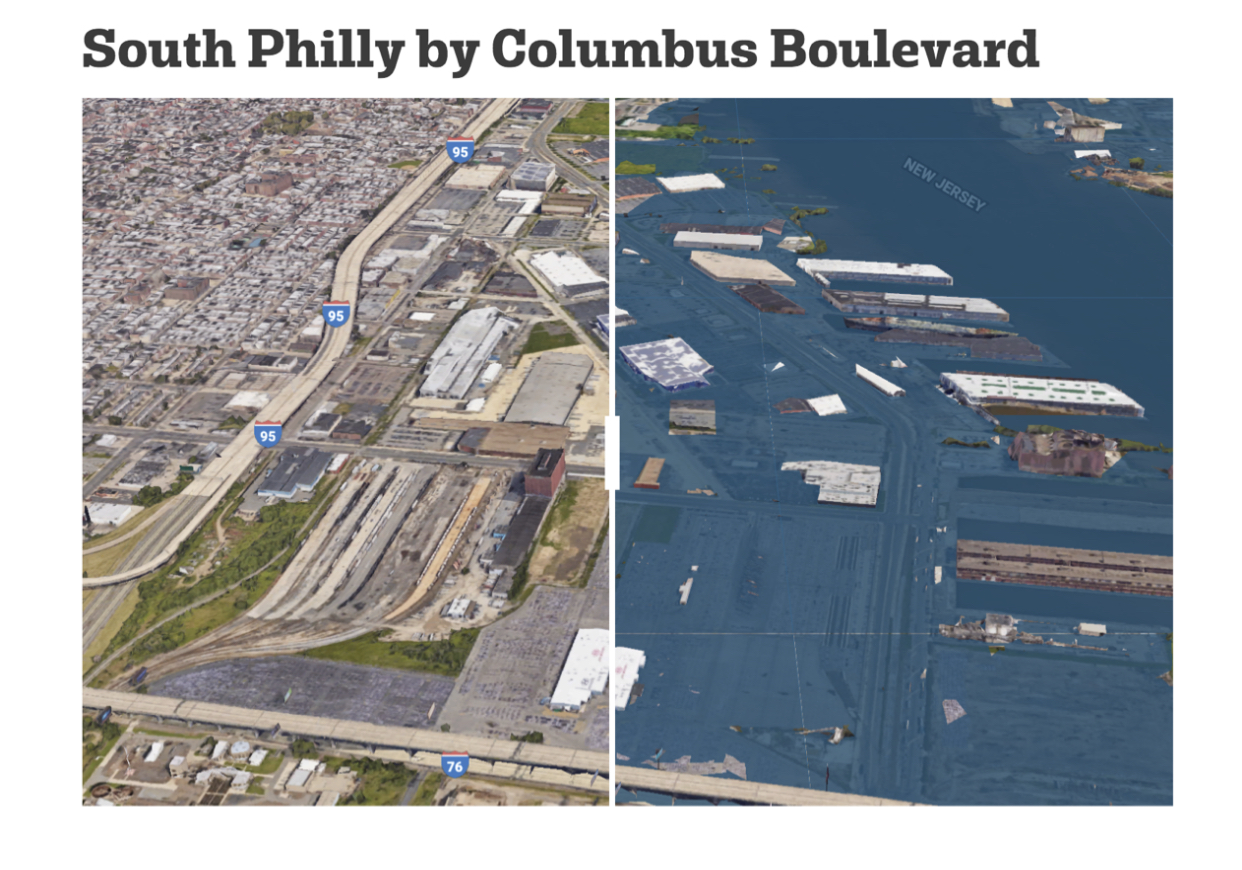 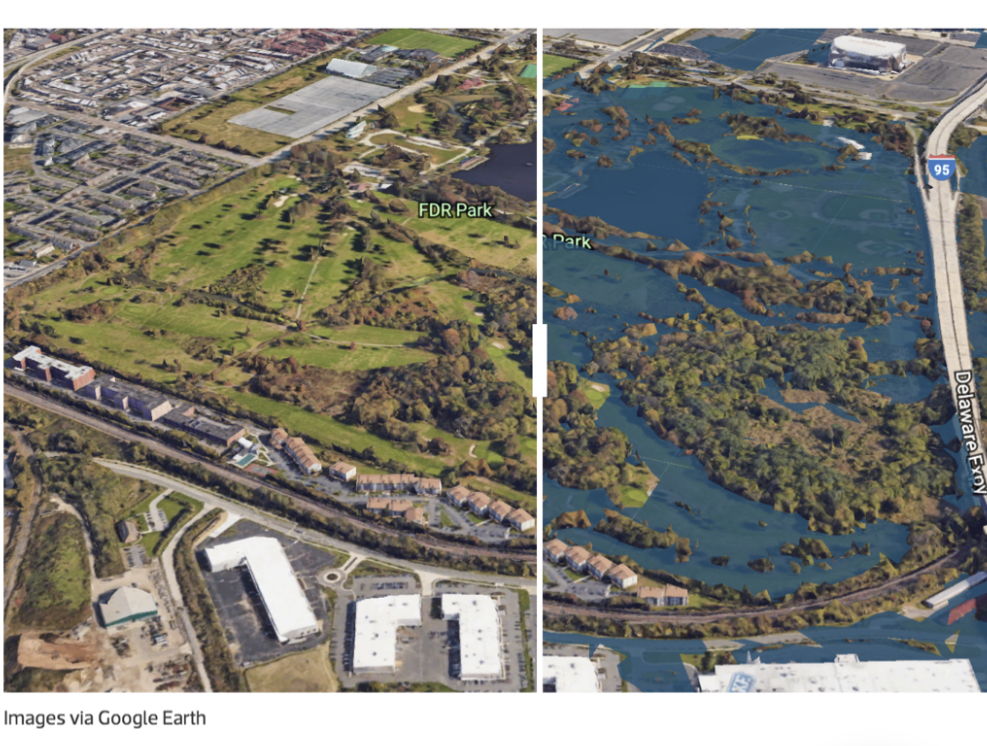 I want to start by thanking Edward Epstein and the Teacher’s Institute of Philadelphia for allowing this to be a continued opportunity for teachers in Philadelphia. The ability to work with, collaborate, and learn from one another is the best kind of professional development. I next want to thank Professor Bethany Wiggin for sharing her knowledge and expertise over the course of the semester, as well as my classmates in the Environmental Humanities from the Tidal Schuylkill River seminar, who made this experience so meaningful for me.

On our very first class session, Professor Wiggin showed us assorted maps, both historical and modern. One offered a prediction of what Philadelphia could look like if sea levels rise as they are predicted to.  That map has been a driving force for my unit and I instantly felt connected to the content in the seminar. I could already feel myself thinking about my students and how they would react if they saw this map, what kind of questions they would have, and how they would be able to connect with the content.

Have you ever stopped to think about what a river is?  Have you ever stopped to think about all that a river has seen and heard?  When you look into a river is it reflecting your own history back at you or do you see all of the changes in society over the course of history that have been swept up into that river? These are some of the questions we discussed in this seminar. What is the Schuylkill River? Who does it belong to? How do we get to hear its stories? Who gets to tell the stories of the Schuylkill River? Parts of the Schuylkill River are often forgotten and with them, the communities of people who live alongside these locations become forgotten. We examined some of these forgotten places along the Schuylkill river, uncovering personal and public histories of local communities as they intersect with the river.  This lead us to the social and environmental injustices that lead to a place becoming “forgotten”.

One of the things that I loved most about this seminar is that it addressed science, philosophy, literature, anthropology, and history, and then I got to connect it to math. I learned what the Anthropocene is, which is said to be the current geologic age that we are in, and is viewed as the period in which human activity has been the dominant influence on the climate and the environment. Many still argue we are not in fact in the Anthropocene, while others debate when humans began to actively influence the environment. A favorite seminar activity was when we were tasked with looking at a timeline dating back two million years and we had to come up with our defense for when we thought the start of the Anthropocene was and when we thought humans actively began to influence the environment.  I am going to stand with what Frankie and I came to agreement on, which is 11,000 years ago, with the introduction of farming. With the introduction of farming began the ideas of surplus and supply and demand and therefore the beginnings of capitalism. If everyone had just farmed what they needed, maybe we wouldn’t be where we are today. Clearly, that is not what happened, society continued to evolve, and we are where we are today, in an environmental crisis.

Obviously I am leaving out many details, but there is no question that the average surface temperature has risen over the last 150 years and the main cause is increased carbon dioxide released by human activities.

For some reason this is still considered a debatable topic in education and often absent from the classroom. Students are not given the opportunity to learn about climate science because some still feel it is connected to politics. This led me to my unit. I knew I wanted to create a math unit based on climate science and how it can impact Philadelphia. I wanted to explore how the people of Philadelphia have already been impacted by the changes in the environment. This got me thinking about how disconnected my students are from their work.  I want to educate my students for their futures so that they are prepared to be active makers of their futures. The students will look at data comparing the increase in global temperature with the increase in sea level and diminished coast lines. They will explore how Philadelphia’s coastlines have changed and how humans and our cultures shape our environment. The students will look at the current predictions for Philadelphia’s coastlines and the neighborhoods near the coast and analyze what will happen if nothing changes. How does this impact their lives?

Sustainability is the ability of living things to exist over time.  This unit will hopefully provide students with tools to see the changes that need to happen and feel equipped to make change themselves.  The unit will close with the students writing to state legislators with the support of their data and analysis. We need to prepare our students to be problem solvers, critical thinkers, and to be able to read, write, and see the world around them.

Tracy Saltz has taught with the School District of Philadelphia for 11 years. She will join the staff at Creative and Performing Arts (CAPA) High School in Fall 2019.  She is dual-certified in secondary Mathematics and English education and is currently finishing a second Master’s Degree in Curriculum & Instruction with the hope to improve and evolve math curriculum at the secondary level.