“Amid all the causes of the destruction of human property, it seems to me that rivers hold the foremost place on account of their excessive and violent inundations… A river which is to be turned from one place to another must be coaxed and not treated roughly or with violence”.

During the night of November 4th, 1966, the Arno River broke through its levees and run through the streets of Florence, Pisa and Grosseto. As images of these flooded historical centers traveled across the globe, people flocked into Tuscan cities to help rescue artworks, documents and manuscripts from the mud. Today, when looking at the river’s swelling waters on rainy winter evenings, it’s hard not to think about the 1966 flood. Yet, caught between a sense of security and fears of disaster we struggle to grapple with these unstable waters. While Tuscans from Dante to Leonardo da Vinci and Machiavelli knew that the Arno was an unsteady river, today we believe it has been tamed. Yet, as rain patterns change, and the long-dried wetlands of the Arno basin reemerge, Tuscany is and will increasingly be an area of high hydrological risk.

Inspired by the ongoing work on the New York waterfront and on the Lower Schuylkill River. The Arno River Tour & Literacy Project is similarly designed to promote more sustainable outcomes for the Arno and its tributaries, as well as to develop and circulate data on the effects of climate change on Tuscan water behaviors and, thus, on land. Access to this knowledge is crucial for the advent of resilient citizens who will have the necessary tools for inhabiting a future of changing water patterns and unstable waterscapes.

The Arno River Tour & Literacy Project aims to raise concern in both the residents of the Arno River Basin and members of the international community who travel to the sites in this area, particularly Florence and Pisa. Different forms of public events will occur on a regular basis and an online platform will both archive and disseminate information on the river. Local study abroad programs, in collaboration with local institutions and grassroots organizations, will provide the structure to dive into the amount of labor, transformations and forgetfulness that is necessary for the maintenance of the river’s present. From such wet engagements a more sustainable future will hopefully emerge. 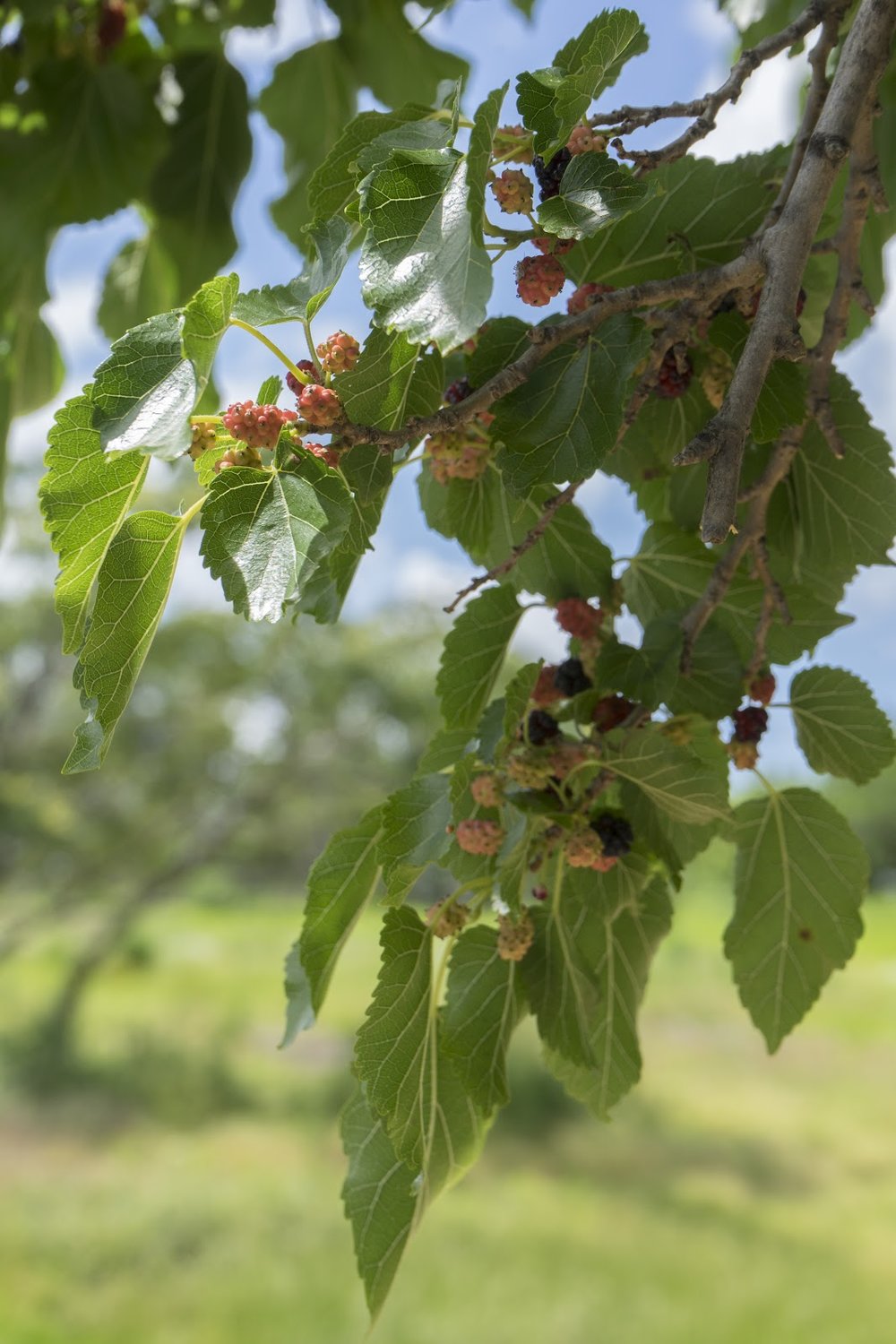 During a summer-time walk to Bartram’s Garden I was pleasantly surprised to find a number of mulberry trees laden with ripe fruit along Gray’s Avenue. Not knowing who might own the trees, and being wary of the potential toxins in the industrial landscape, I initially hesitated to eat the fruit. But memories of the mulberry tree across the road from the house I grew up in eventually made me give in to the temptation of the mulberries.

As I looked around, licking their purple juice off my fingers, I saw that it was not just ripe mulberries that I had access to. Materials from inside the large public waste management facility, the scrap dealers and the car mechanics in the area had leaked out from the confines of private land and on to the public sidewalk – everything from bottles of engine oil to whole electric poles and railroad ties. Subsequent research revealed that these leaked materials seem to lie in multiple, intersecting legal and ethical grey areas: Who owns trash? When can trash occupy public space? Is the information gleaned from trash subject to laws protecting privacy? When is something trash? When is it a resource? What value does trash have? When is it pollution?

These questions in turn made me think about what might constitute public material. This questions frames my work as a PPEH Graduate Fellow. I am researching laws and legal cases around the ownership of, and access to trash to understand my rights and responsibilities as a member of the public. I am using this information to gather trash from public spaces around I visit. This public material will form the raw material that I will reassemble into sculptures in the Garden to initiate a public discourse around these issues.

The population of Philadelphia is diverse, and the drinking water they have access to is as well. Living in the city where it has one of the oldest water system in the country, even though the city water department has put a lot of effort in providing high quality lead free drinking water, but still existing old facilities might contain pipes or other treatments that made of lead. (Note: “Around 10-20% of local households are thought to have lead pipes leading into their homes, mostly installed at least 100 years ago when the engineering advantages of lead outweighed health concerns.”)

The water crisis in Flint, Michigan caused many concerns in Philadelphia, people do not know whether their drinking water is safe or whether the water testing reports from the city water department is reliable or qualified enough to trust. Some people may use filters to receive cleaner water, some only drink bottled water, and some may not have ability to afford changing anything about their water while maintain concerns about their water.

The city water department has been providing free lead testing for years but the latest results can be found online is from 2015. Volunteers to provide water sample to participant in the testing has been increased only slightly and the sample size is not big enough to compare with the 50,000 households in Philadelphia that might face lead issues. Therefore, I decided to reach out to the Philadelphia’s Water Department and conduct research and find out data with their 2016 and 2017 lead testing program. The results will hopefully increase communications between residents and the local government. Additionally, we will work on improvements and preventions methods if the results is not optimistic.

I also want to collaborate with the city water department to re-design the volunteer lead testing program and to better encourage more citizens to participant in the program so that we can collect more data to find out the truth. I would like to ask help from one city official (for example, city councilwoman Helen Gym - who initiated the 2016 hearings) to send out a Tweet and ask about people’s thoughts on local drinking water and their opinions on water testing program and how can we motivate more people to join the testing program.

Every resident in Philadelphia could be part of the public for my project if they wanted to be, but my targets are Twitter users since tweeting will be one main method to reach out to my audience.My background research will focus on Philadelphia Water Department's data and will consider how this data has been used by different agencies, and how this data could be useful and accessible to the public I’m working with.

I plan to engage the public that works, volunteers, and recreates on or near the Schuylkill River, at Bartram’s Garden in interviews that try to tease out what visitors to the Garden look for and expect in public engagement projects (specifically in tours of the river), to build an idea of how to structure a Tour of a Tidal Schukyll River Past which could be printed and illustrated as well as guided and physically held on the water.

The tour will have a traditional audience, in that people will be able to read its description and any accompanying materials. It will also have a participatory audience, made up of the people who will later experience it, but in the meantime will have the opportunity to voice their opinions, concerns, and wishes while I am onsite at the Garden.

The final large component of this work will take place in libraries and archives, as I attempt to synthesize the history of the Tidal Schuylkill’s terrain into a form easily approachable by as many people as possible. Because this project focuses on the river at a time before European colonizers took over the landscape, I look to bring out, highlight, and otherwise examine indigenous (Native American?) voices and objects, bearing in mind that they are often mediated, distorted, or otherwise obscured by European or Eurocentric narratives.

As sea levels rise and threaten our landscapes and skylines, it will be useful to look back in time to understand how humanity’s conceptions of nature and objects in nature (such as rivers), have already changed. Some authors in my environmental humanities coursework suggest that these understandings are directly influenced by and change with the socio-historical context in which they occur, rather than being static and unchanging. In short, nature, and by extension, rivers, are what we make of them. If we can understand how the river has changed before, perhaps we will be better equipped to adapt to the reshaping of our environments that is already in progress.