Pooja introduced the series last week and two additional pieces by interdisciplinary contributors will follow this one.

Fragments of ceramic vessels litter the surface of most archaeological sites in South Asia and beyond. They form the traces of past occupation, signifying that a particular place has previously been in use as a site for dwelling or gathering, a space through which people may have passed or where they paused for a while. The line of inference that travels from sighting a scatter of potsherds with the identification of past activity is complex; its layered character is telescoped by the sheer frequency with which archaeologists perform what is considered a basic heuristic act. This is all the more apparent when we consider that any such identification of past occupation has a temporal aspect: potsherds represent specific pasts, such as the ‘Iron Age’, the ‘Neolithic’ or the ‘Medieval’. In this short piece, I attempt to disentangle the ‘arts of noticing’ that make such conclusions possible, given that fragments of ceramic vessels do not disclose time in the way that other materials such as charcoal or bone do (through radiocarbon dating). I refer specifically to the ways in which archaeological practices of narrativizing time hit the ground at Maski, an archaeological site in the semi-arid southern Deccan with a long history of occupation. 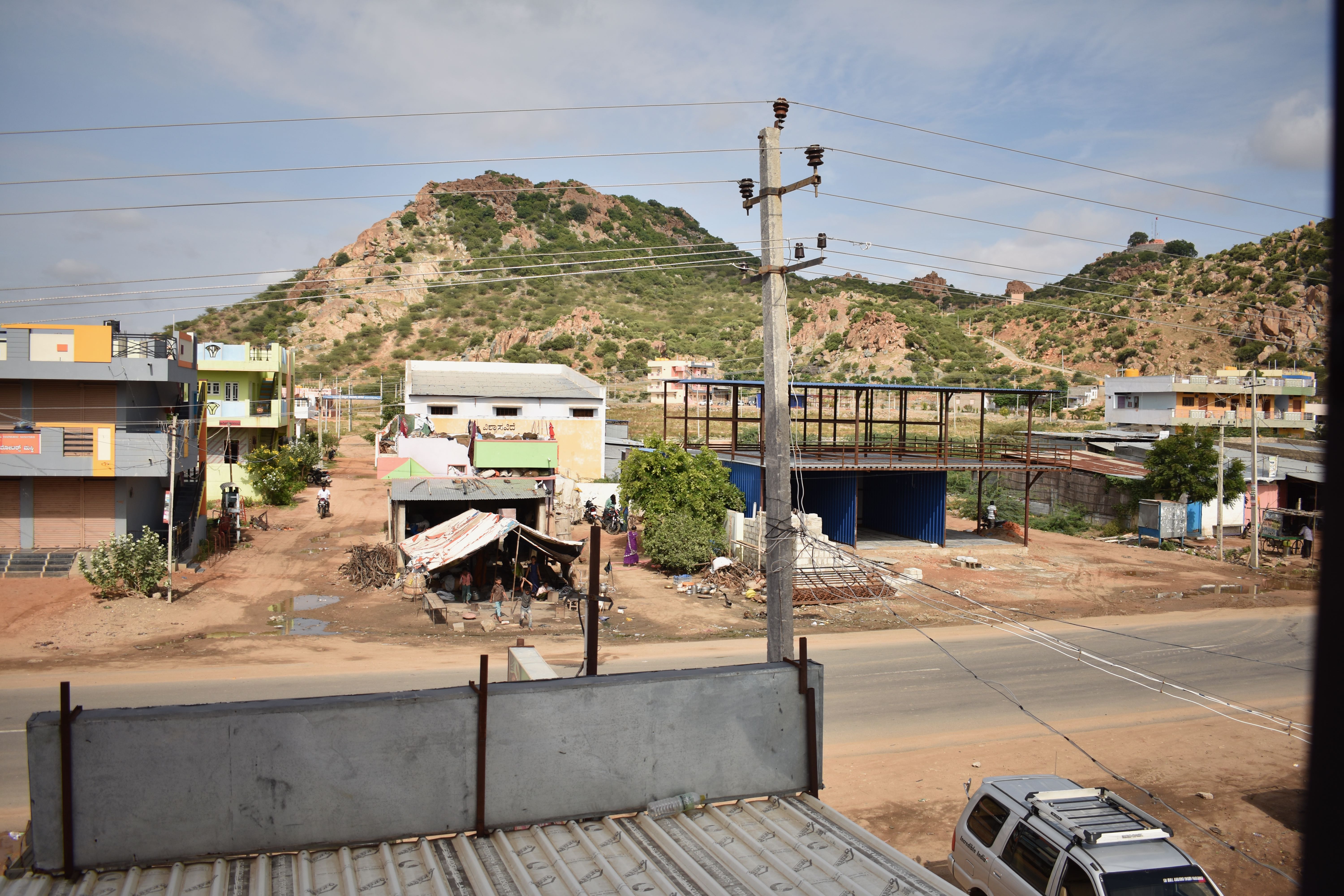 A view of Maski's Durgada Gudda outcrop, where occupation dates back to the 3rd millennium BC. Granitic outcrops such as this one are interspersed with plains.

The connection between ceramics and time in archaeological practice speaks to the importance of highlighting diachronic change (i.e change across time instead of in a singular moment) through narratives about the past. Before the advent of radiocarbon dating, classifying objects and sequencing them temporally were crucial to periodizing an archaeological site and outlining continuity, rupture, and movement (whether trade or migration). Furthermore, anchoring materials to time allows archaeologists to establish relations of contemporaneity, precedence and succession across space. For instance, if two distinct sites are identified as ‘Iron Age’ based on materials noted there, we imagine that people inhabited these places at roughly the same time. Such conclusions – central to archaeological ways of building knowledge – solidify a circular relationship between certain kinds of materials (especially ceramics) and temporal categories so that a shift in materials signifies a distinct era. Time seemingly stops when artefact assemblages remain stable. 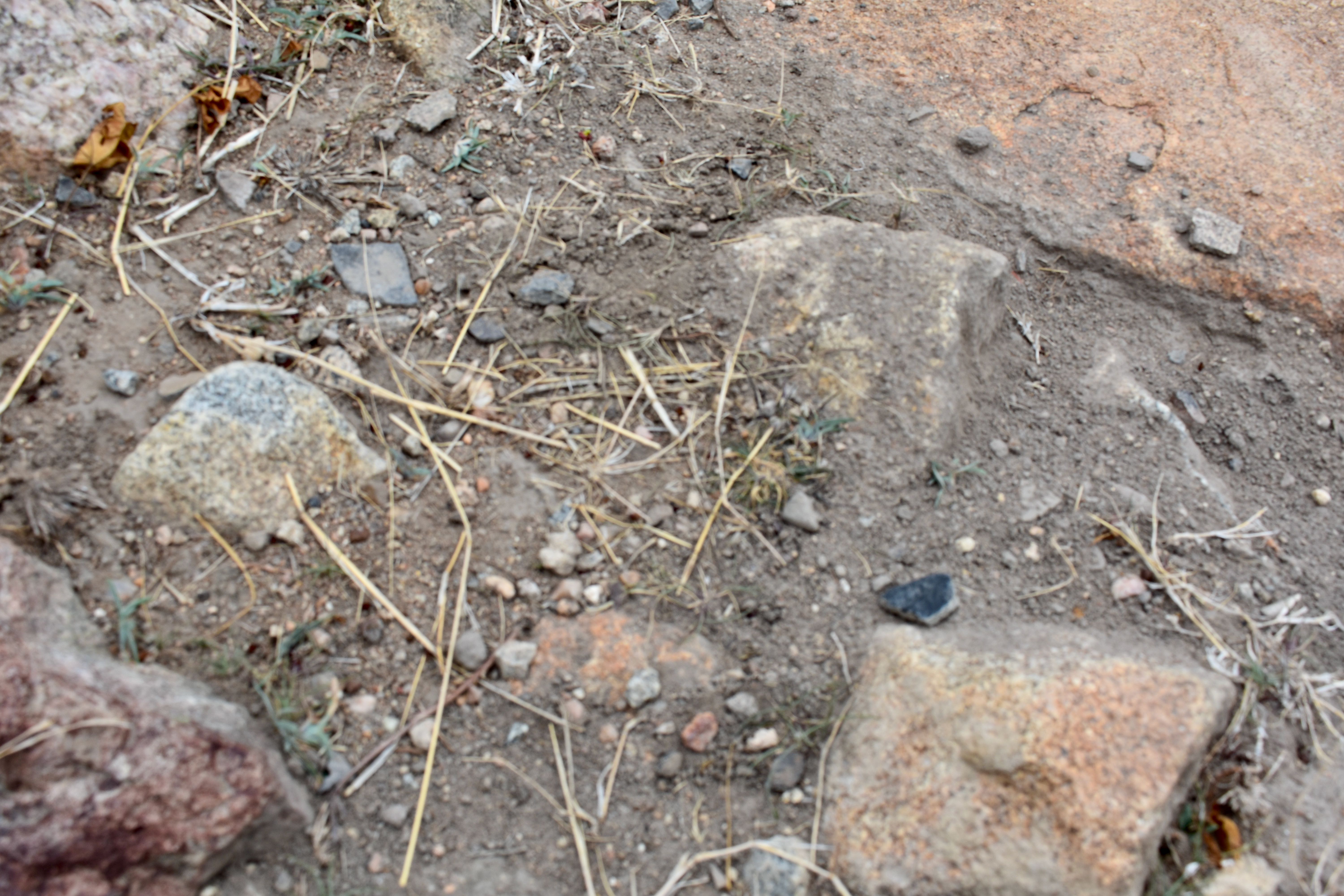 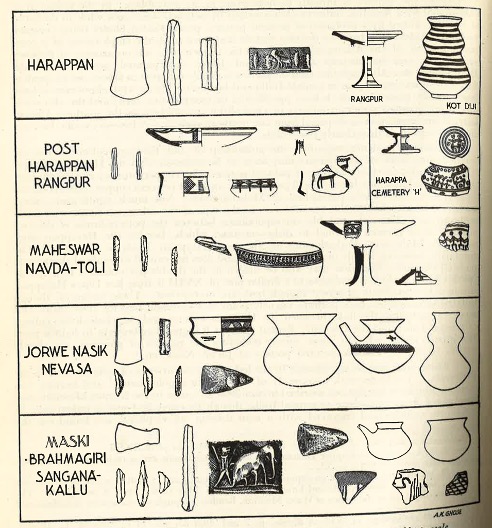 Schematic representation of materials & their temporal moorings in B.K. Thapar's (1957) report from his excavations at Maski, a multi-period archaeological site in South India. Excavated ceramics from Maski lie at the heart of my dissertation.

Archaeological methods of analyzing ceramics are specifically attuned towards noticing similarity or change. As illustrated above, these are typically used to chart long-term diachronic change. Commonly used categories like the ‘Iron Age’, the ‘Neolithic’ and the ‘Medieval’ each encompass several centuries. At the level of observation, however, similarity and change refer to aspects specific to practices of ceramic production, use, re-use, breakage and discard. The conclusion that certain ceramics belong in the Iron Age whereas others are Neolithic or Medieval is premised on the idea that modes of production changed over time. This premise opens up a social world within which these vessels were produced and used – for cooking, commensality, storage, trade and ritual. However, the crucial place ceramics occupied in activities both routine and symbolic is silenced when they become instruments to reference long, often poorly defined chronological periods.

What might be said about time, change and continuity if we return to the minutiae of observations that are foundational to archaeological ceramic analysis? These pertain to characteristics such as colour, appearance and texture, thickness, size and weight. Each attribute suggests something about the ways in which vessels were formed, as well as how they may have been used and discarded. The colour of a vessel, for instance, may speak to the conditions under which it was fired, the preparation of paints or glazes and the potential valences of different colours. Whether potters painted, glazed, polished or decorated their wares adds yet another dimension to the rhythmic, learned, and embodied process of producing vessels from clay.

Just as in our own homes, where containers range from the large and heavy-bottomed to the small and thin-walled, so the size and thickness of archaeological ceramics reveals a sense of the variety of vessels used for diverse activities, which broke at varying rates and were replaced accordingly by people in the past. These attributes suggest that apart from belonging in time, ceramic vessels are also embedded in and constitutive of the iterative acts and meaningful temporalities of quotidian life.

The fragmentary artefacts archaeologists study are far from being perfectly preserved signatures of the past. The very attributes and features that speak to processes of production or acts of use also index the post-depositional lives of these objects. For instance, small and highly eroded pieces suggest a well-trodden space whereas larger fragments are more likely found in spaces that saw less footfall and were not well-maintained. 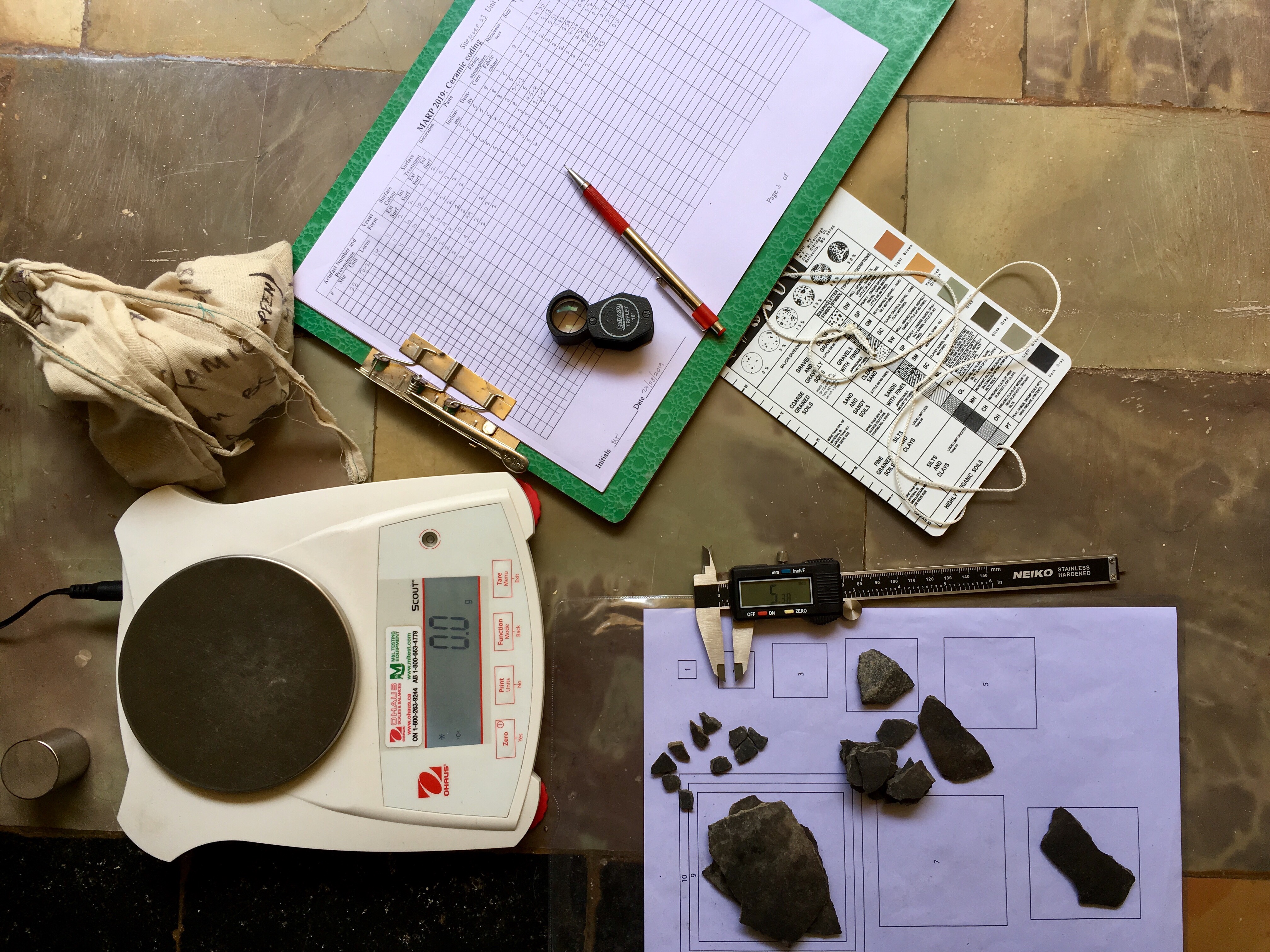 An apparatus for taking note. 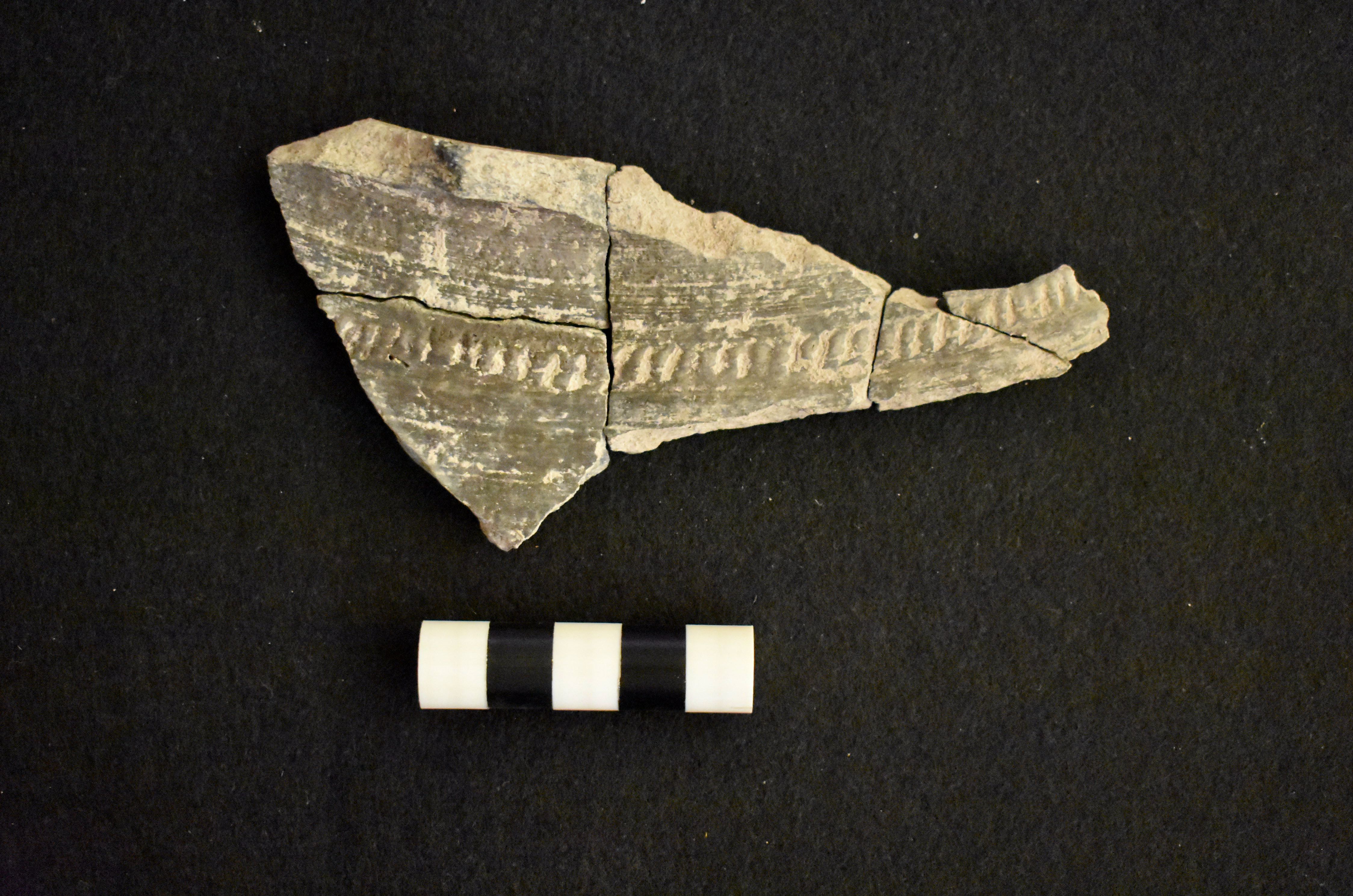 Fragments of a large jar pieced together from an excavated space at Maski, which was likely an area where several households dumped their rubbish.

To return to the detailed observations that have long defined archaeological ceramic analysis produces a series of interpretive possibilities about practices of production, everyday acts of consumption and use, and the routine tasks with which people busied themselves. If these observations have ultimately been used to produce heuristically expedient chronologies, at a more proximate level they disclose the many temporalities that coalesced in and were formed during quotidian activities of making, use, maintenance, discard and renewal.

Mannat Johal is a PhD candidate in Anthropology at the University of Chicago. Her dissertation investigates how people and communities formed relations to time in routine engagements with materials. Focused on ceramics excavated at settlements around Maski that were occupied during the 12th-14th centuries, her research raises questions about historicity, the relationship between archaeological materials and time, and the periodization of India’s premodern past.