Updates on Futures Beyond Refining with Mr. Charles and Mrs. Tammy Reeves

On a warm day this June, PPEH Founding Director Bethany Wiggin, Program Coordinator Angela Faranda, and I (Mia D’Avanza, also a Program Coordinator and managing editor of Field Notes) met with Philadelphia-based community organizers and Futures Beyond Refining partners Mr. and Mrs. Charles and Tammy Reeves, and former PPEH Public Research Intern Alex Imbot on Penn’s campus. At the time of our gathering on June 18, 2021, Artist Amy Balkin's temporary 14x48 foot billboard, Area of Interest, had been looming above I-76 near the former refinery site for two weeks. The billboard, which was installed for the month of June, incorporates four pieces of research data into a visual essay, pointing towards alternative futures in a site-specific, rented, transient format. It features Mr. Reeves' powerful wish for the site to become a cemetery, memorializing lives lost to the slow violence of refining.

Over the next half-hour, the Reeves generously shared their family legacies of community activism (most recently as leaders of Resident Action Committee 2  and the Tasker-Morris Neighbors Association) in Grays Ferry, a neighborhood on the Schuylkill River’s eastern bank just south of Center City, and next door to the Philadelphia refinery. They described their family’s experiences living adjacent to that refinery, last operated by Philadelphia Energy Solutions and now the largest unredeveloped brownfield in Philadelphia, the impacts of the 2019 refinery explosion on their fenceline community, and their hope that this project will empower others impacted by environmental racism to fight for and win a more equitable future. 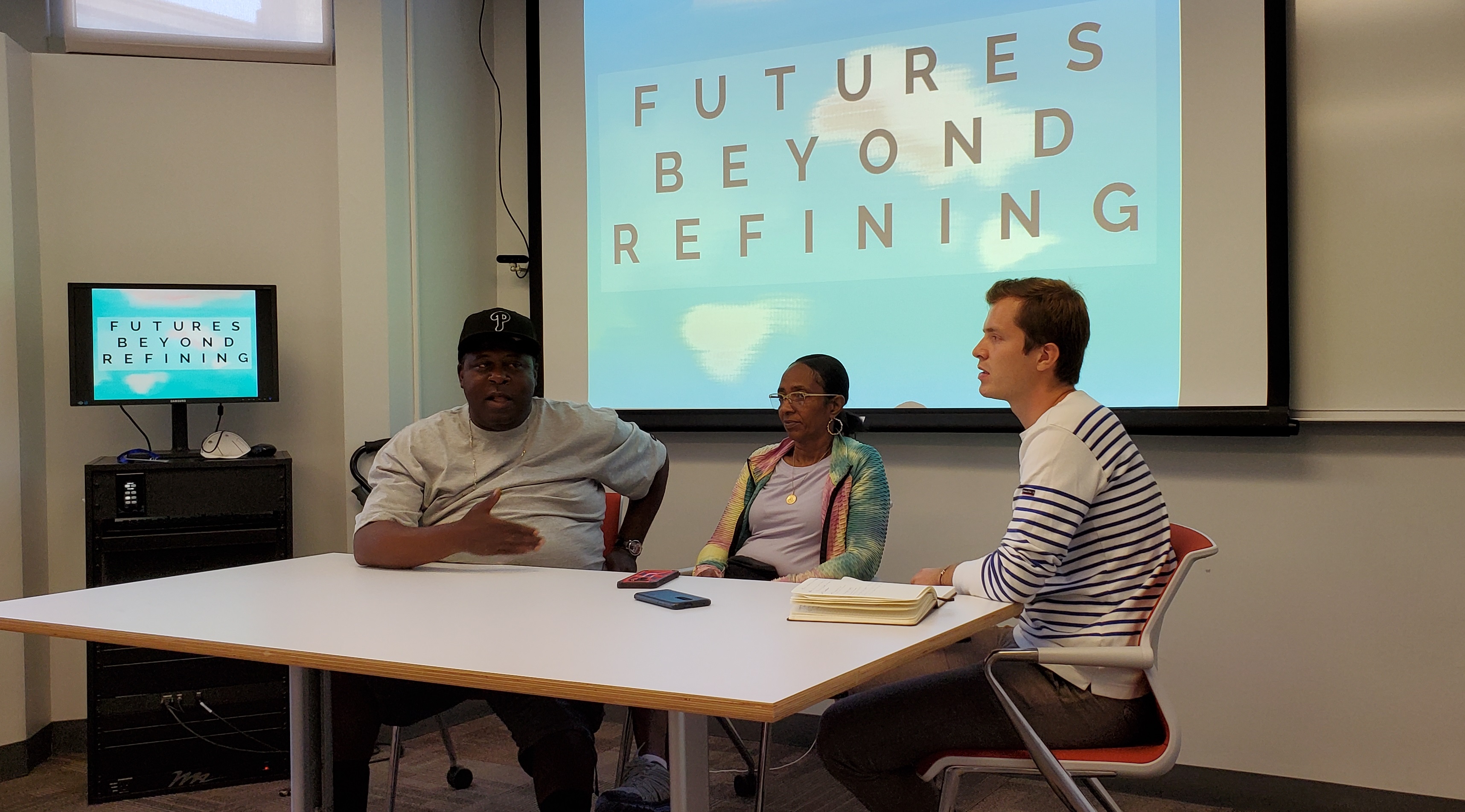 On working with Amy Balkin in the Speculative Archiving And Situated Memorialization workshop:

Charles Reeves, Jr.:  I remember the meeting we had, I don't remember which day, with Amy and all them students [invited by PPEH to join the workshop] that was gonna help me make my memorial. So I had students from all over--students from New Zealand, Mexico, I got all these different students and they had all these ideas about the memorial. Because I want a memorial, and I let everybody know Mr. Reeves want a memorial on that site, right, because I deserve--I want my people to never be forgotten and I want that site [on former refinery lands] to be the place where it goes. But anyway I remember all their different ideas and I remember they had these pretty pictures and they had all these different designs, but you know what stuck with me the most was their care, right. They put work into that design because they knew it was hurting us. And when I seen people from Mexico and Texas and right, you know, New Zealand--Ms. Amy right [who was living at that time in Aotearoa or New Zealand]--I'm still amazed by her! I'm like this thing in New Zealand!

Tammy Reeves: I was really interested in most of the things, the projects that they [Amy Balkin and workshop participants] brought to your attention that they wanted to do for the refinery. The waterfall, you know, and people's names on it and the lights and all of that--but, we came up with one better. The billboard. And that blew me away. And I've been, every time I go on Grays Ferry I can stand at 31st street--and look up and I see it! So you don't have to go across the bridge to see it. You can stand right there and see it and I just want other people to recognize it, look into it, because it's, it's, it's a hell of a story behind it. It really is. 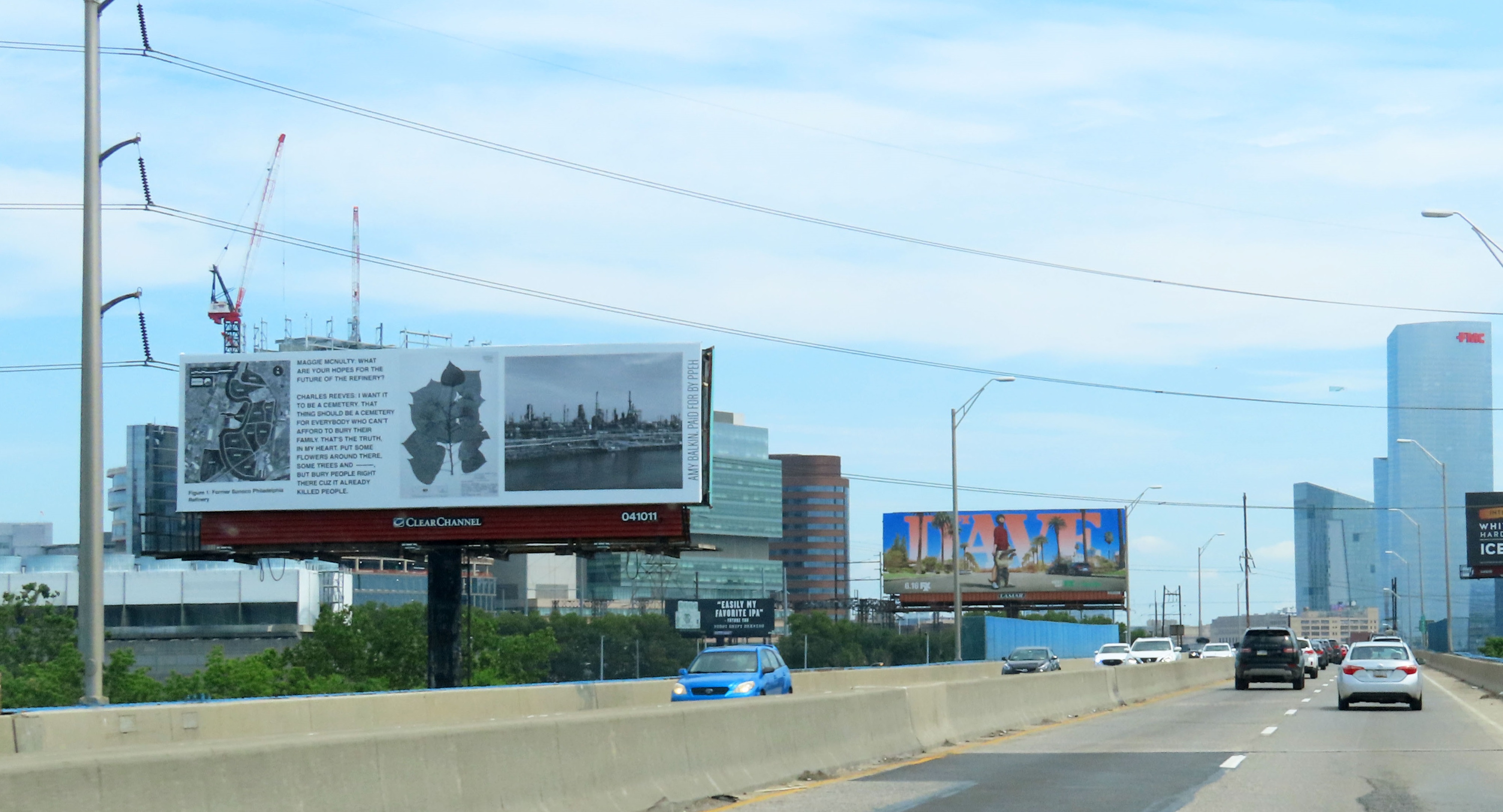 On the history of explosions from the refinery and the most recent 2019 explosion:

Charles: Well I would say first on the explosion thing, ...the explosion thing was traumatic. But it was only traumatic to people that didn't live there, right. To us that wasn't traumatic. Like we've been having explosions for like a thousand years! Again it was just at that time it was more people paying attention to it but again, like if you wouldn't have said nothing about the explosion we would've forgot about it because we always had explosions. But I want everybody to know, right--it wasn't big to the people that live there. You know what I'm saying? Because over my life 20, 30, 50... but pick a number, right, of explosions. We had explosions that shook the ground, we had explosions that made the air change, we had so many different explosions. That one explosion didn't affect me.

Tammy: I remember I heard it and I didn't know what it was and my bedroom, if you look out my window you can see over top of Audenreid [a school very close to the refinery’s fence]. That's when I knew something was definitely wrong over there. And then I turned the tv on and that's all you saw was the refinery on fire and I'm like "But I thought they were shut down!" You know?  It was still over there brewing, you know? So it kind of bothered me because at that point I'm thinking in my head, "If all these years we're thinking that it's closed, you know, why is it still operational? What, what's over there that's causing it to burn?  And did people get hurt over there that night?" This is what I'm thinking in my head laying in that bed. When we did the tour it was a devastation for me to see that over there like that. It just was unreal, totally unreal.

Building upon this work, we are pleased to share a prototype for a public poster-essay that extends Balkin’s Area of Interest project developed with PPEH and RAC2. This set of 20 postcards gathers and situates diverse research data as open sets of questions related to the future of the refinery lands, its ongoing remediation by Sunoco subsidiary Evergreen Resources Group, LLC., and Hilco Redevelopment Partners' plans for the site, amidst a present marked by severe storms and other extreme weather events brought by climate change. 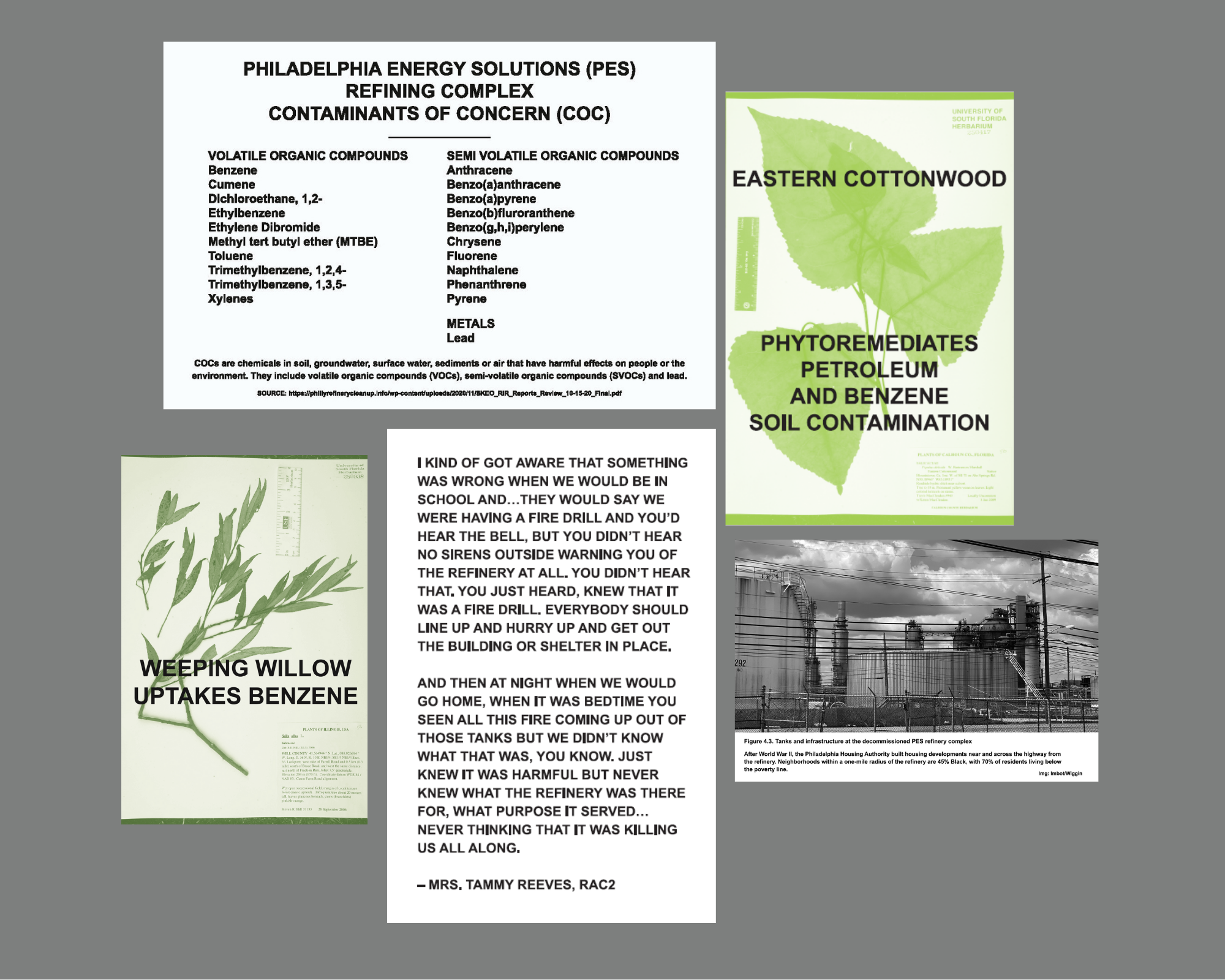 In producing these cards, PPEH is offering a modest set of tools for starting conversations about how we memorialize lives lost to refining and for considering how refining is remembered, known, and experienced. For your own set of cards, please message director@ppehlab.org.

Watch the video below for the full conversation.