Walking the Arno: a View of Florence from the River

This is a guest post by PPEH alumna fellow Luna Sarti.

Last summer, inspired by the work of the Rising Waters Project, the 2018 summer On-Water Intensive, and the Fall 2019 Liquid Histories and Floating Archives seminar, I co-organized a public walk along the Arno river in Florence. When the members/founders of D.A.P.A. (Jacopo Natoli and Arianna Desideri) contacted me to help them run an event aiming to explore Florence’s Arno, I feared there would be an unbridgeable distance between my work as a graduate student in the US and the expectations of the other participants. However, I accepted the challenge and co-organized the public walk. We met, we agreed on the itinerary, we sent out the announcement for the event, and - on a very hot Italian summer afternoon - we walked. 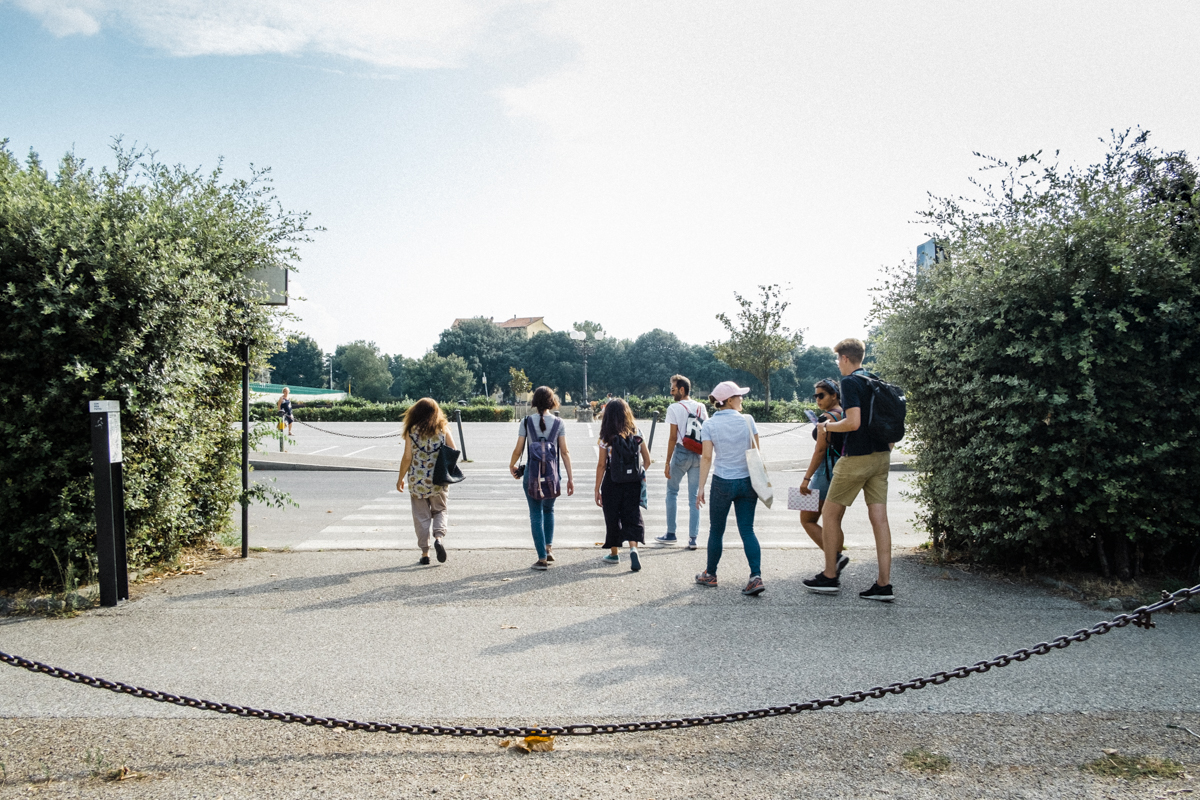 We moved upstream for about 4 miles along the river’s left bank. From the Parco delle Cascine, through the city center, up to the Weir of San Niccolo, we experienced an incredible variety of places and rivers within the river as the landscape changed.

We stopped four times: on the grassy left bank under the Cascine Bridge, on the paved river bed by the Weir of Santa Rosa, on the paved lungarno by the corner between Via dei Bardi and Piazza di Santa Maria Soprarno - just past the famous Ponte Vecchio - and finally at the Terzo Giardino, the sandy strip of land below Lungarno Serristori. Each stop involved different guided activities, including group discussions, performances, individual drawing, and note-taking.

In spite of my concerns, participants were enthusiastic about the insights I provided on the historical entanglements between river and human ecologies. Performative actions enhanced communication and trust, thus transforming lecturing moments into opportunities to share knowledge and perspectives on what processes shaped (and continue to shape) the urban fabric. In such an atmosphere the knowledge I developed through historical research about Florence and the river represented my contribution to group discussions and responded to the inputs and the interests of the other participants.  Within the group, I acted as an expert, but never that of the only expert, as is often the case with tours or traditional lectures. And between one stop and the next, participants talked (often in pairs) to share concerns, questions, and observations. 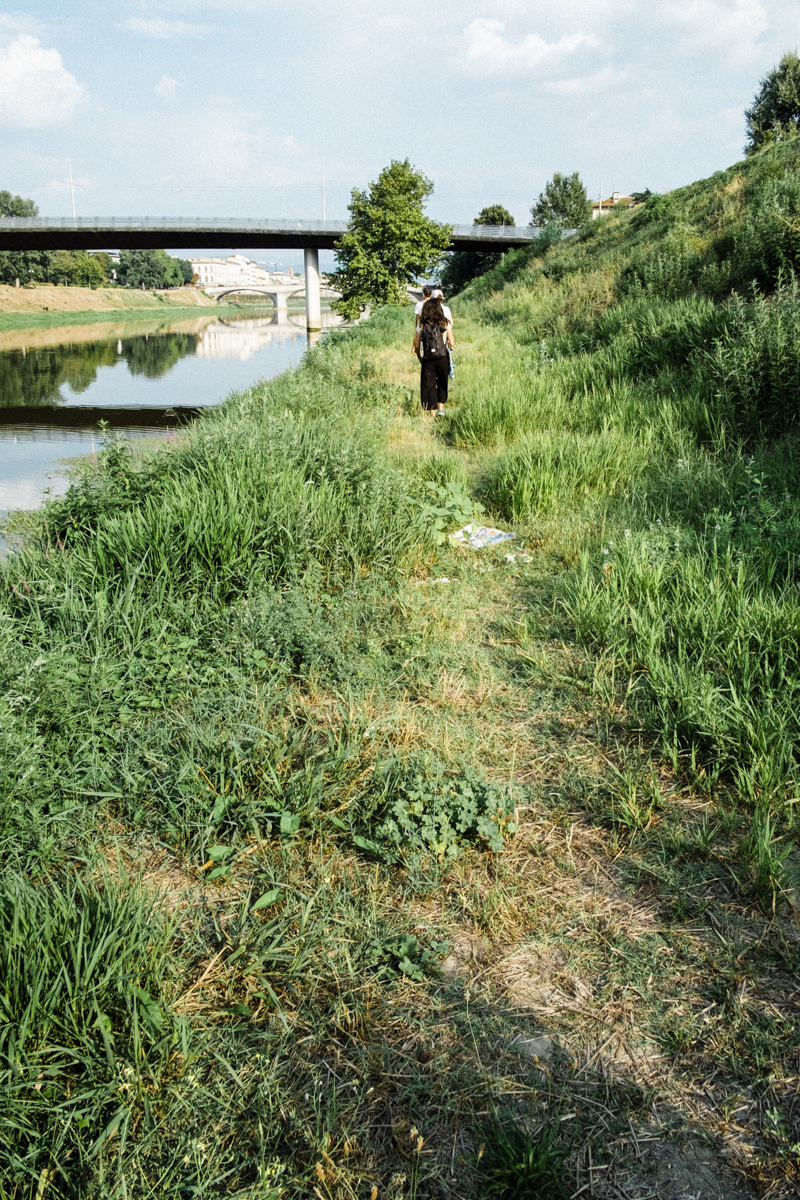 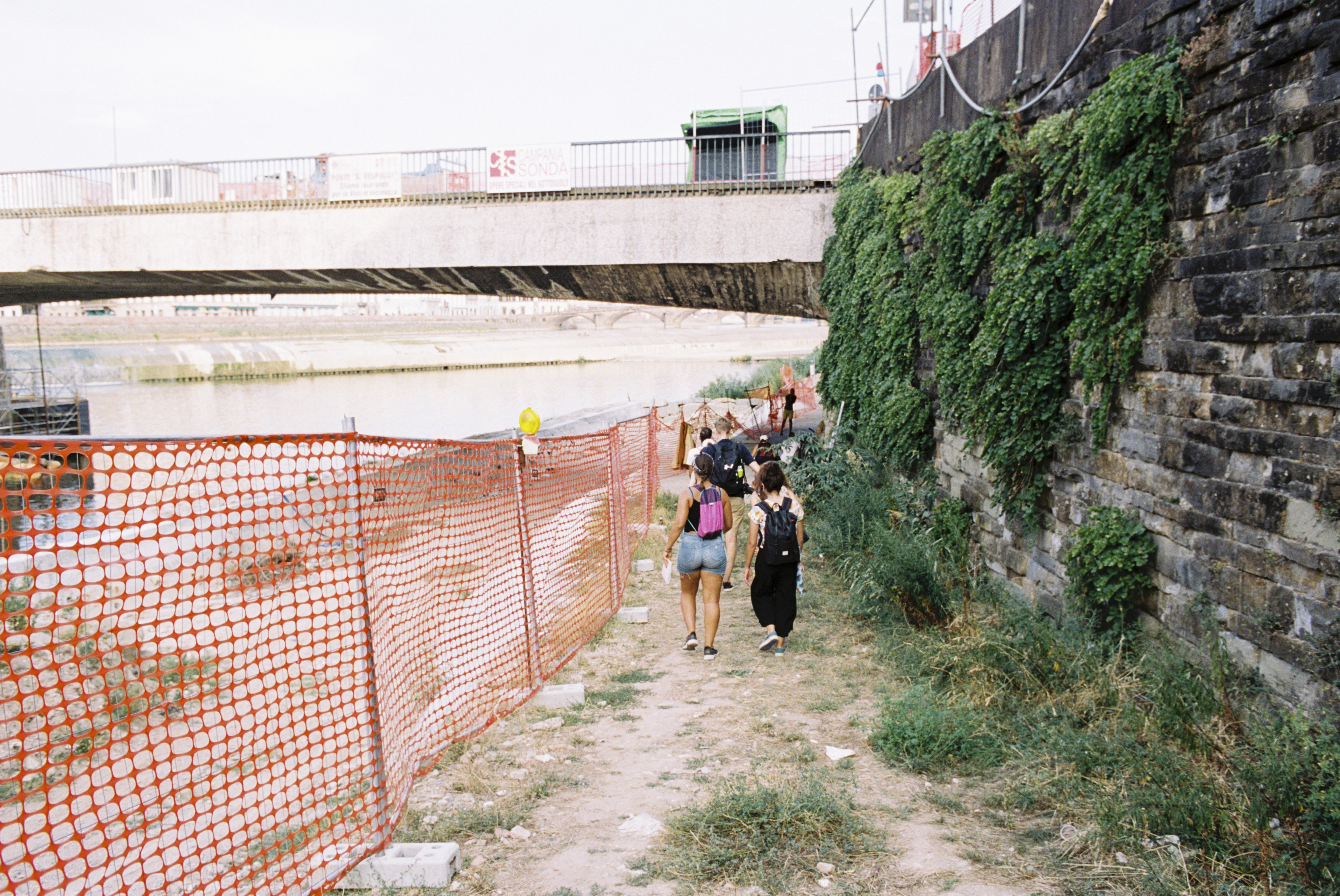 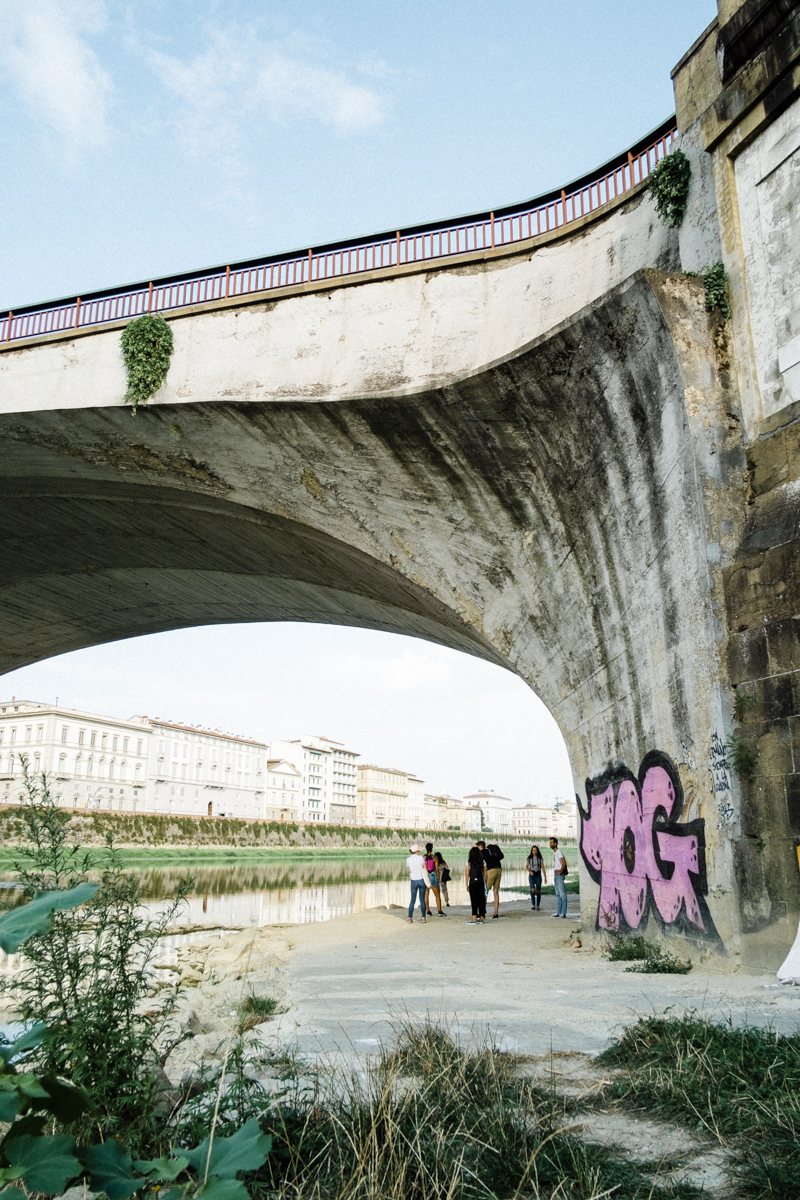 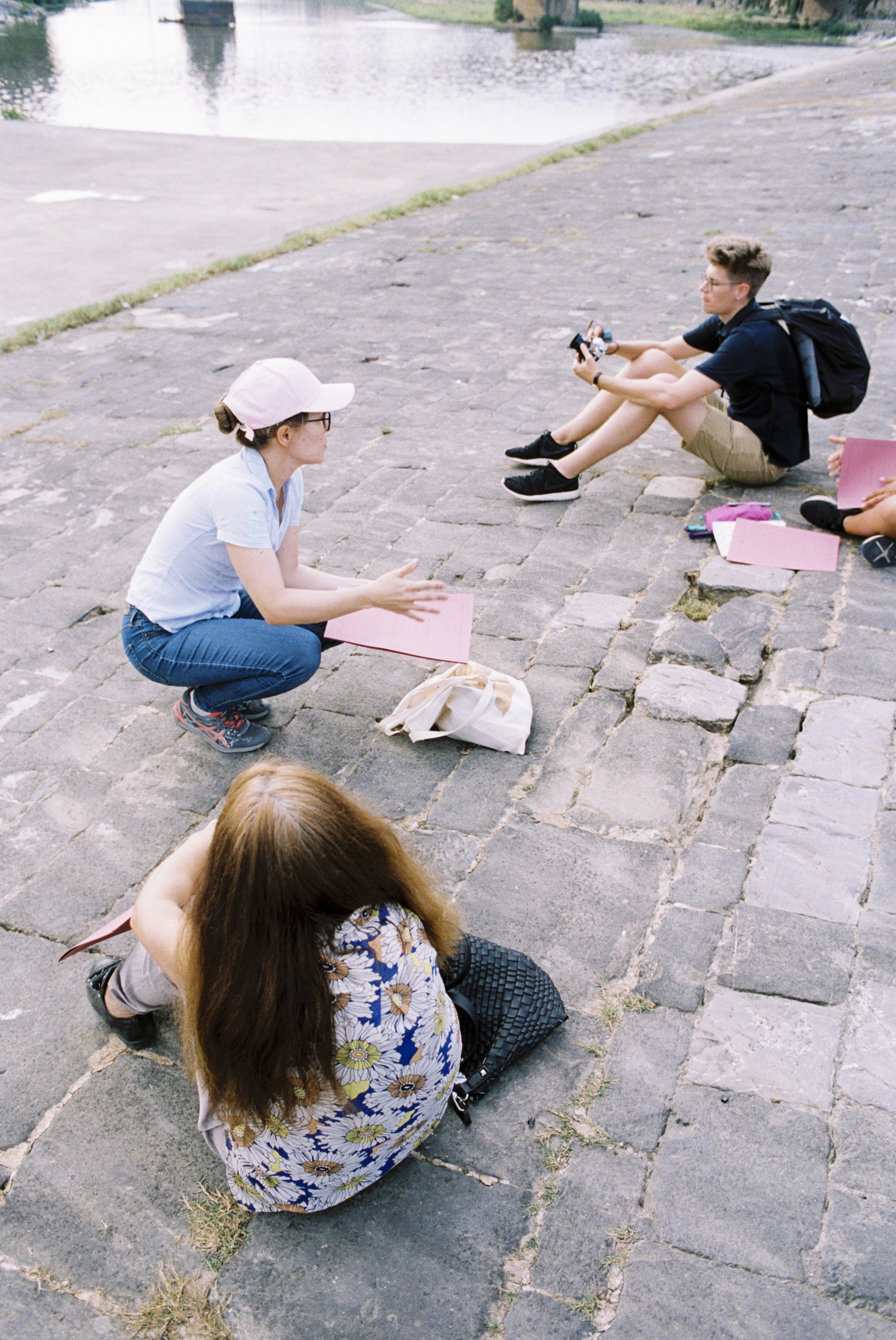 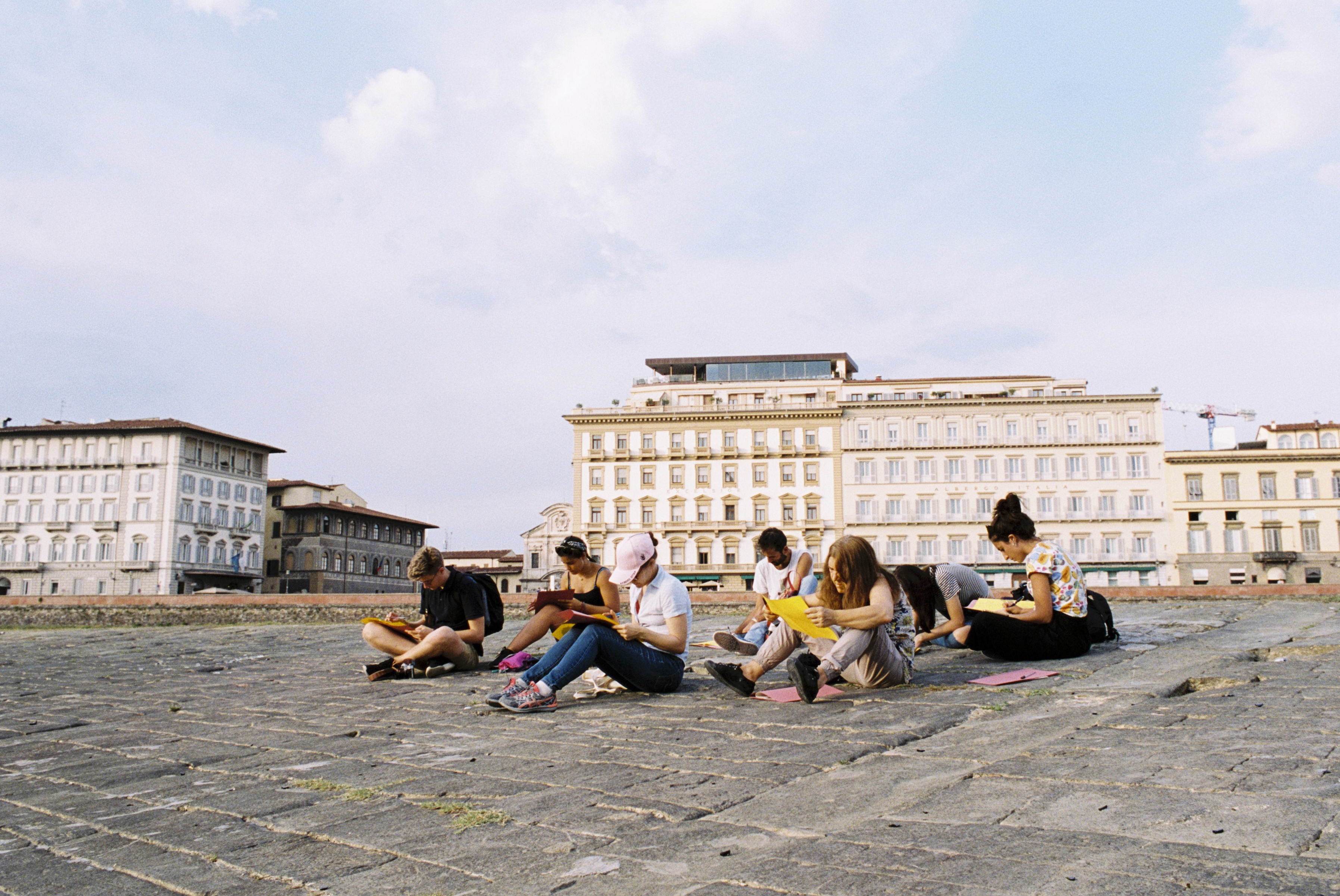 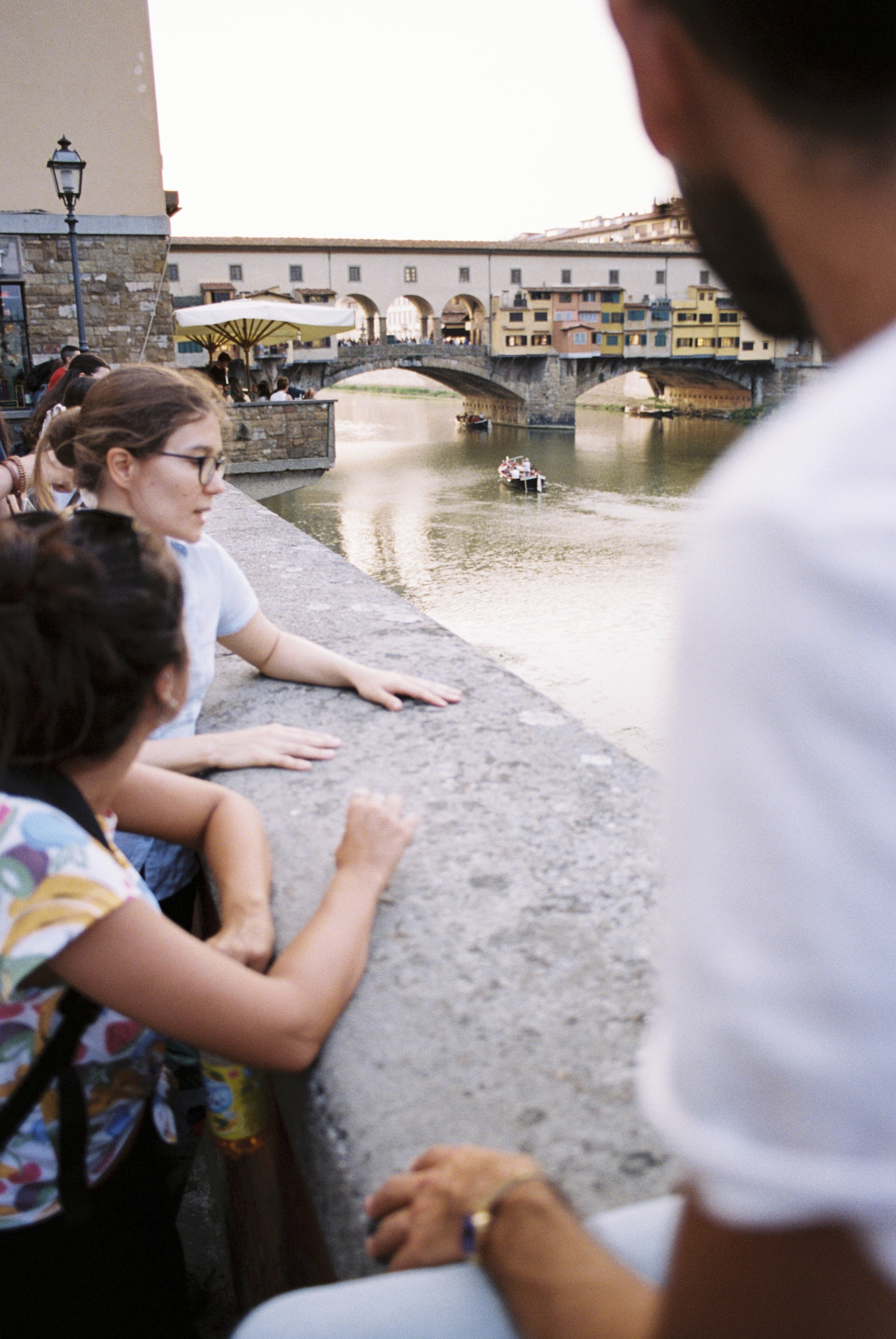 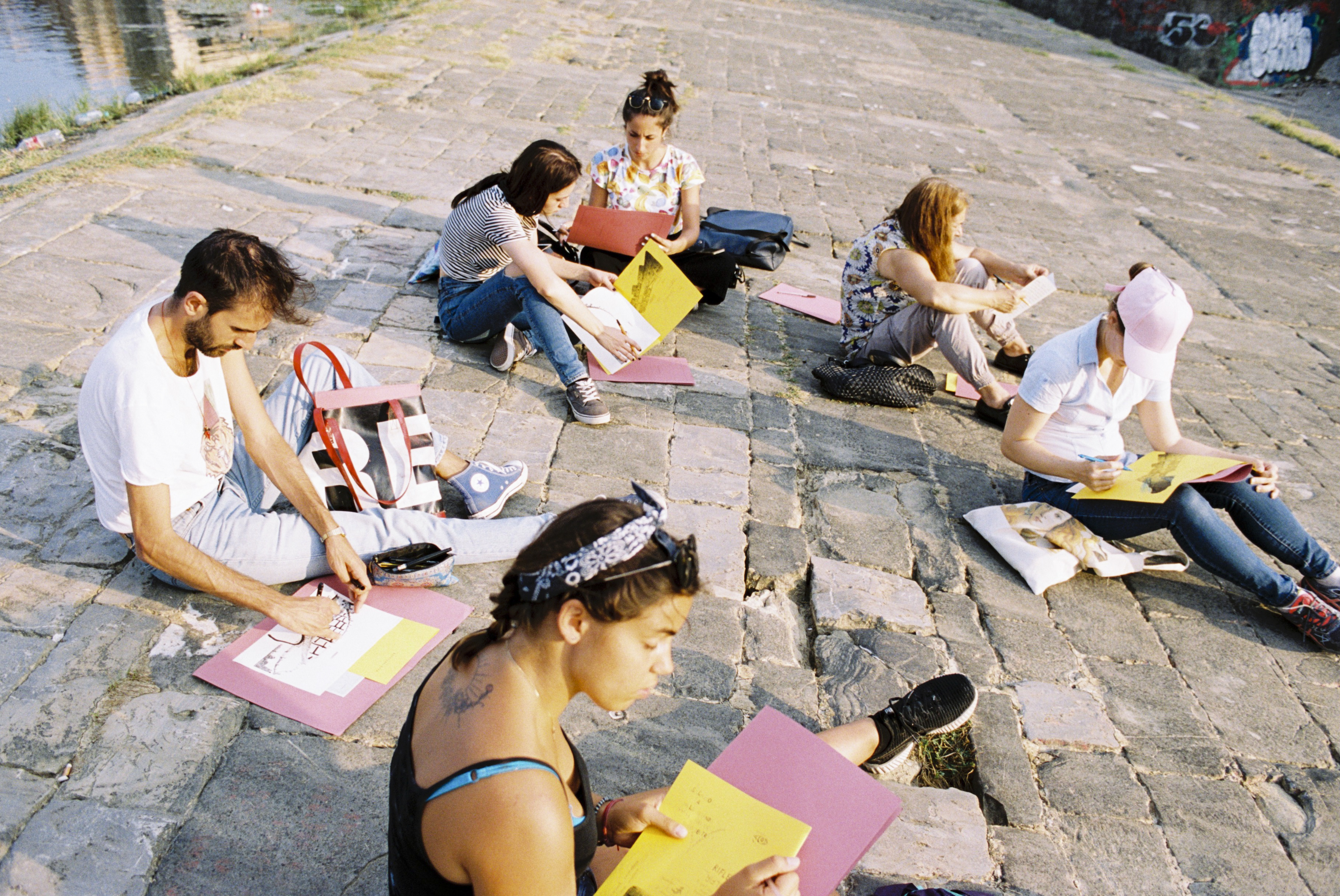 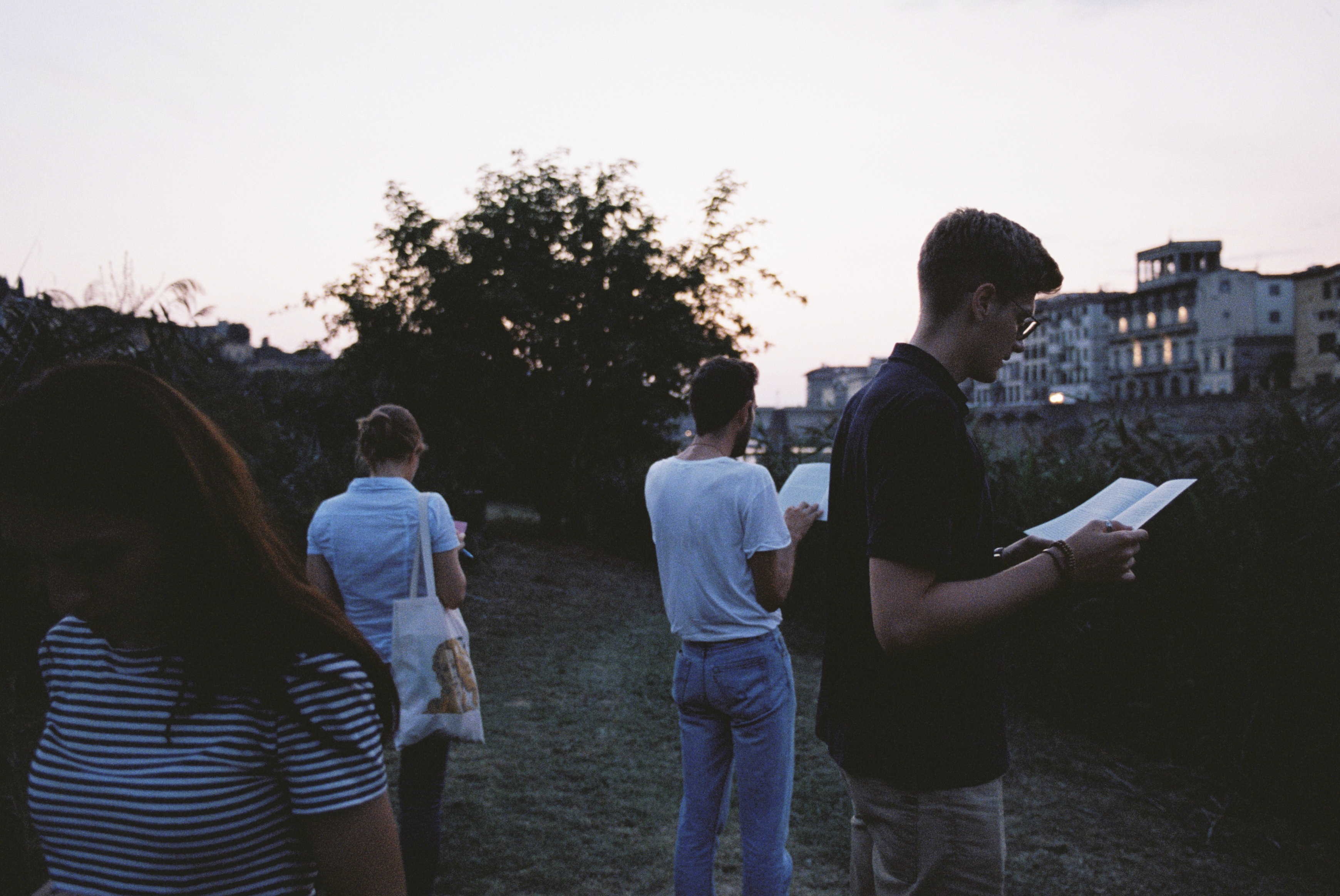 The experience left me with a sense of unexplainable change and many questions: what am I doing with what I find in the archives? How do I connect this knowledge to the present of this place, and to what other people have known and now know? What future do we want for ourselves, members of the local community, world visitors, the river, and all the critters living here? What should I answer when asked -why do we walk? 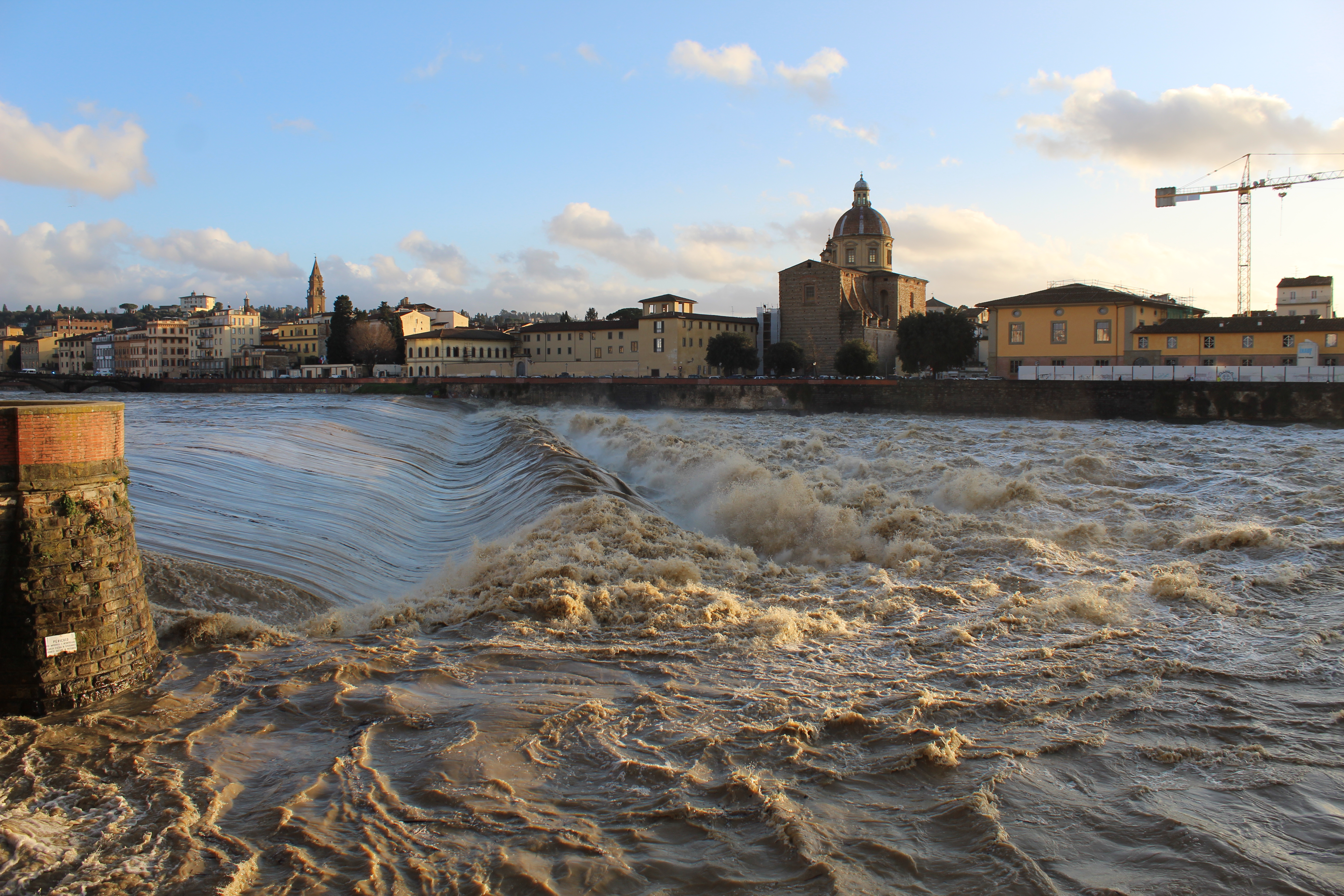 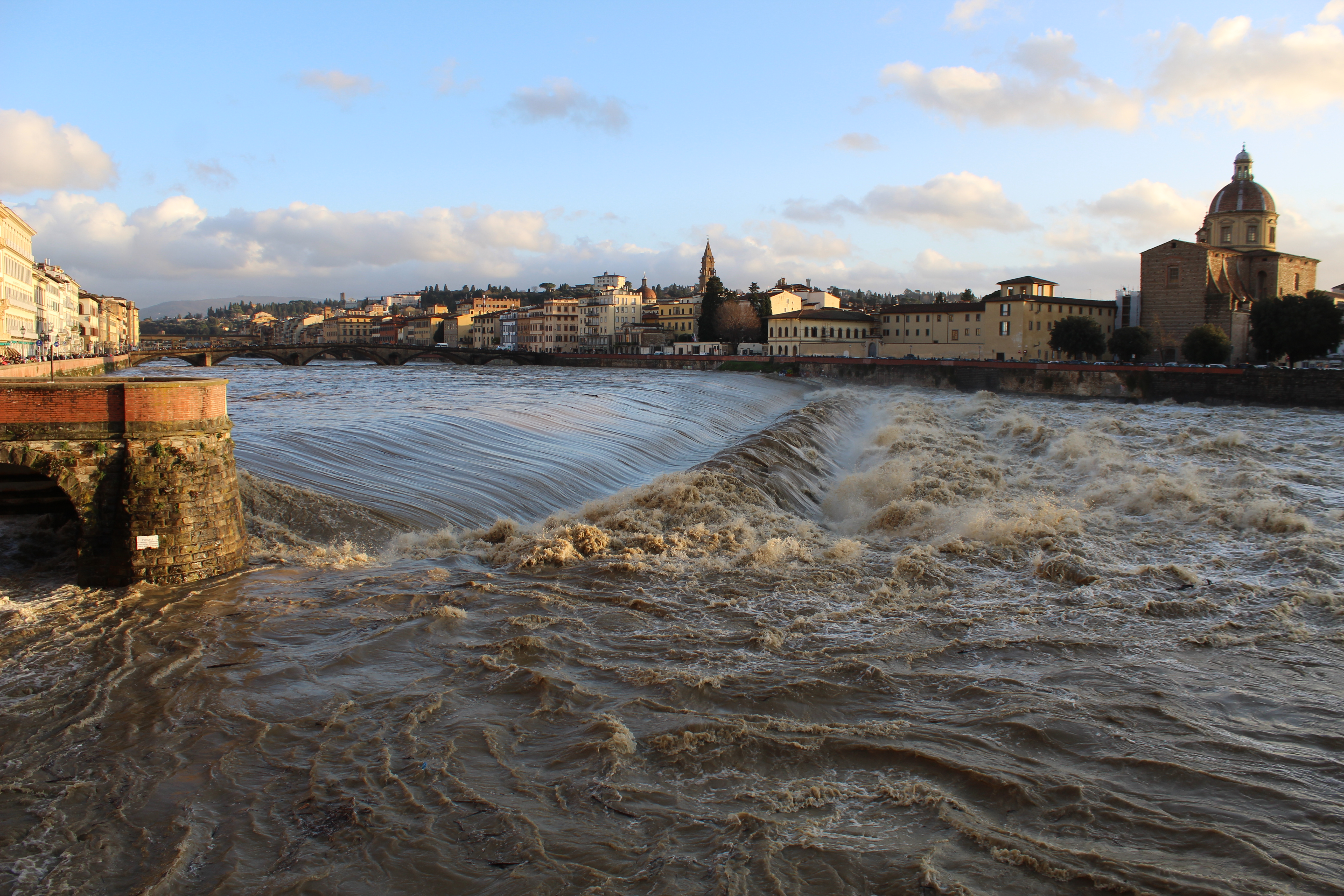 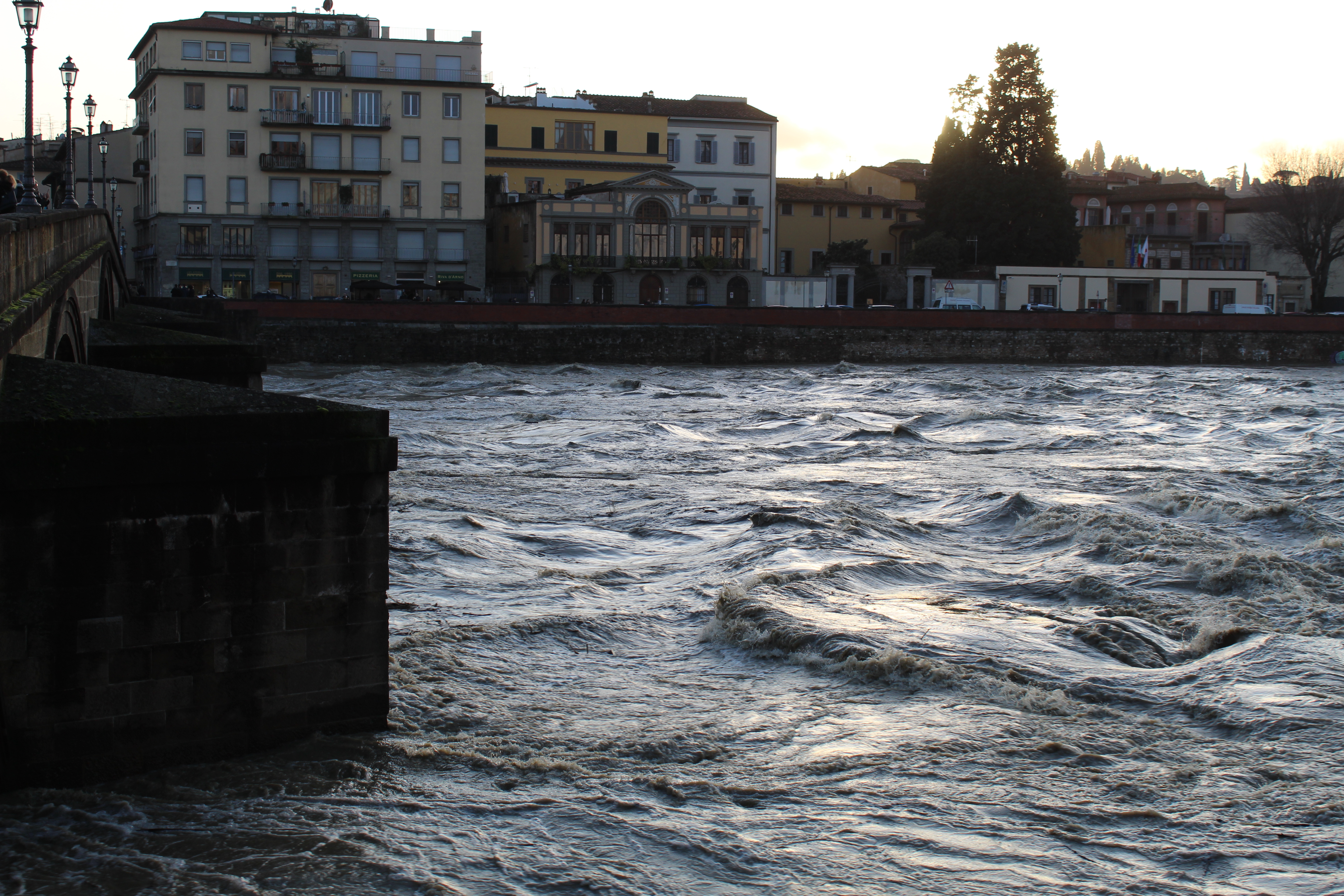 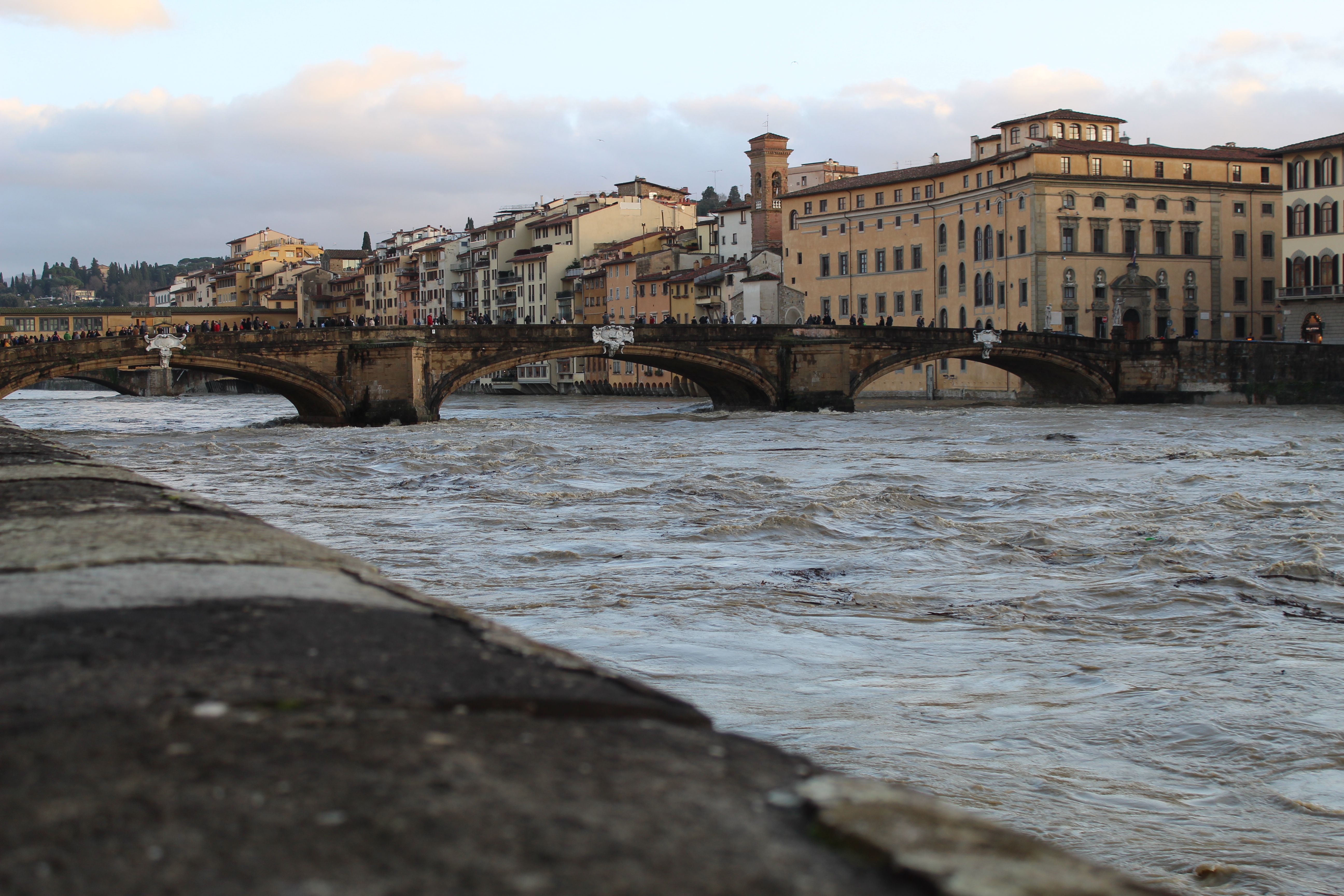 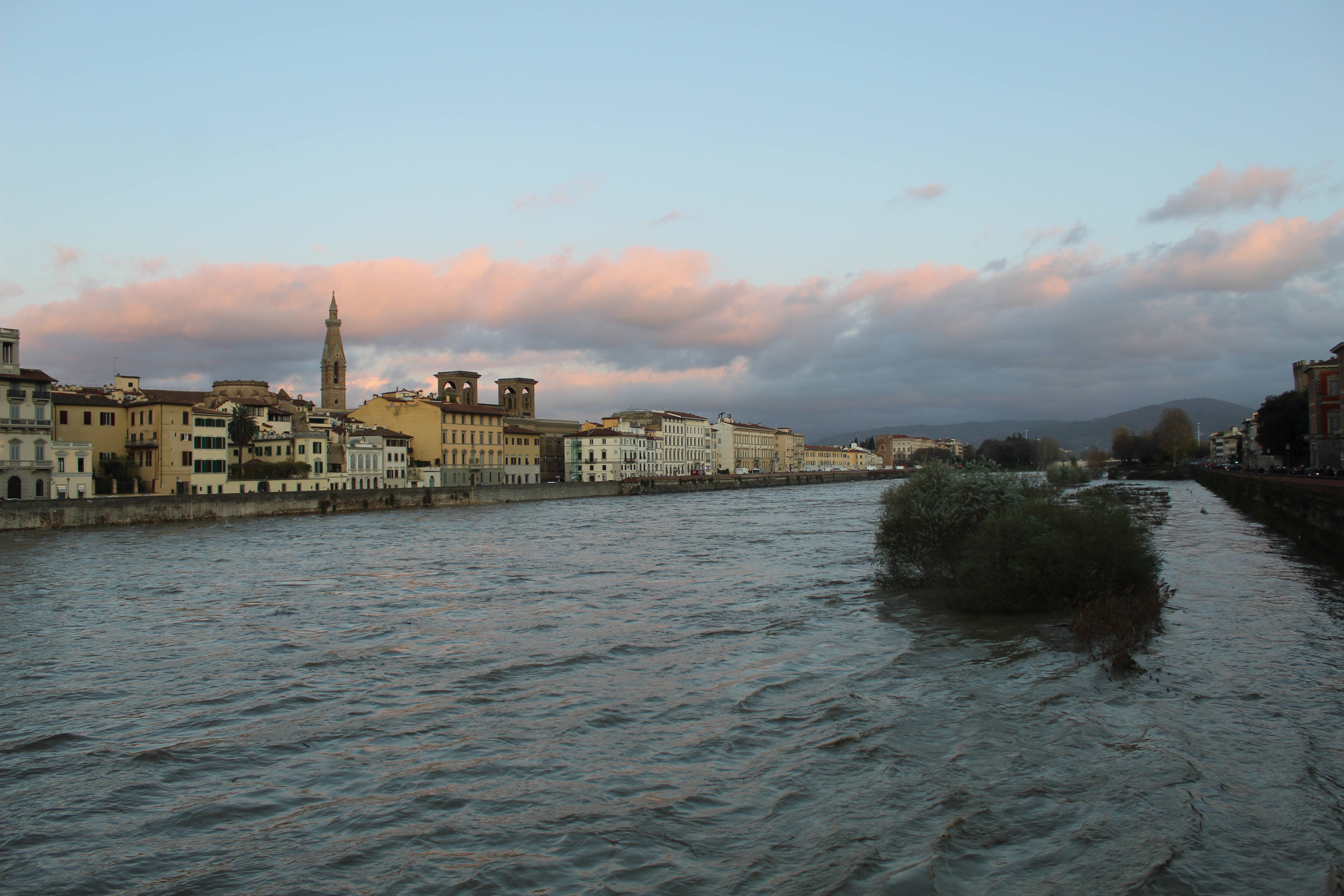 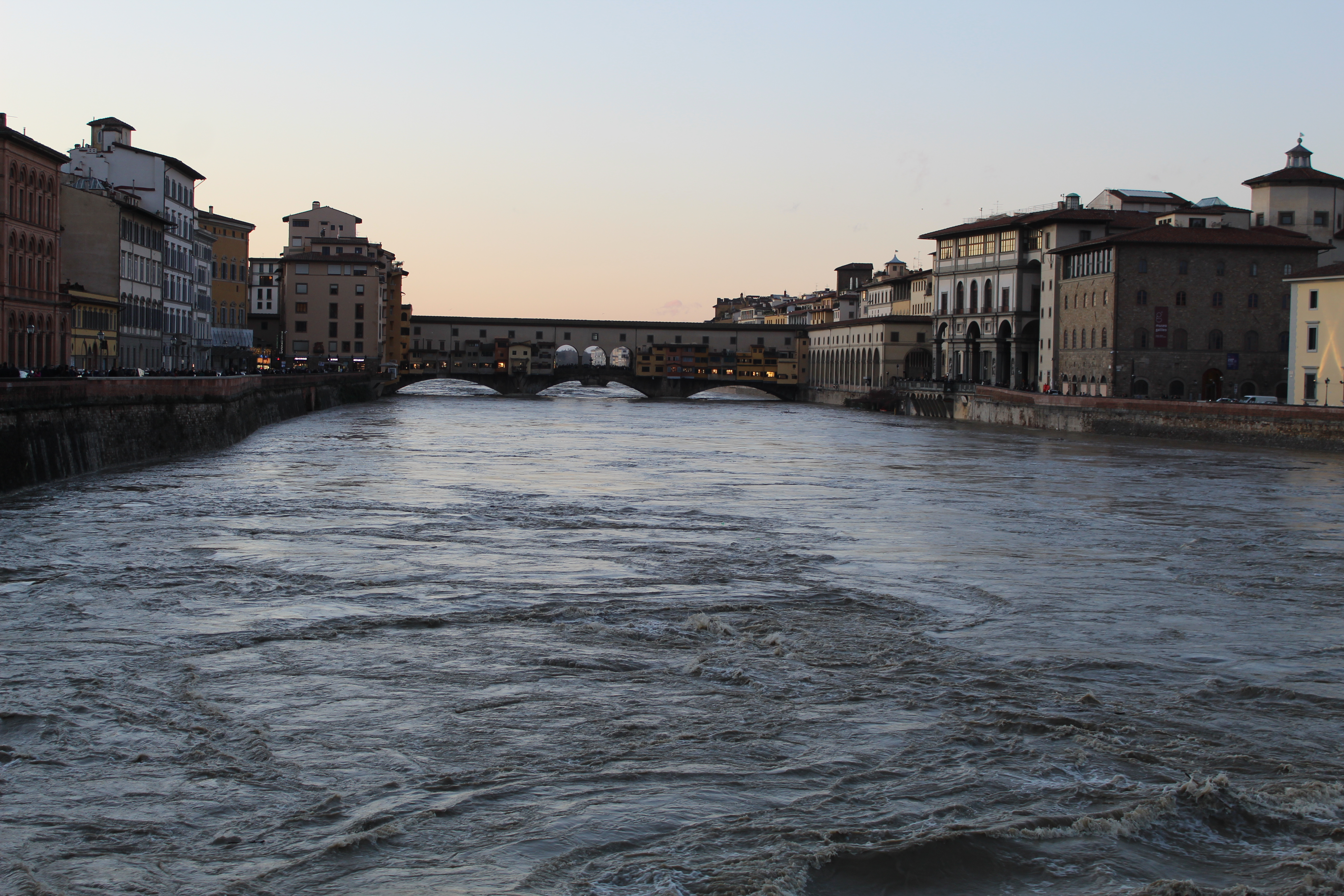 Looking at the river now, as the waters rise and decrease, reaching the highest levels in the past 20 years, it seems easier to respond: we walk because we are trying to do something differently, to enhance change. From this perspective, connecting knowledge from the archive with that of other people means that I need to be with other people, listening to their questions, acknowledging their perspectives, asking for what they know. The future we want can only emerge from this messy dialogue, in which we try to find a sharper sense of the river-city continuum, one that is based on situated, complex, and attentive systems of knowledge.

Rewiring our historical imagination is a crucial step in the construction of a future life that will deal with a more fluid relationship between urban space and waters as they become increasingly unpredictable. Archives and books record a small part of the process that shaped Florence as a space characterized by a clear distinction between areas that stay free of waters and those where water is supposed to flow. The rest of the story lies with the river, and with innumerable sets of knowledge on whose terms, as someone in academia, I can barely begin to speculate. Like with many cities in the world, the imaginary associated with Florence is landlocked and dry, which, as Eric Leed highlights in The Mind of the Traveler: from Gilgamesh to Global Tourism, is “a view of history filtered through the results of history” (19). Although Florence’s intellectual and artistic legacy is usually perceived in terms of terrestrial civilization, the city owes much of its past to fluvial life and mobile waters: the river (as it used to be) powered the city’s mills, transported wood from the mountains and wares to the sea, thus enhancing the economic flowering that supported the cultural endeavors for which the city is still famous today. Picturing a fluvial city, surrounded by streams and marshlands, unsettles the traditional dry understanding of Florence, and might help to orient ourselves toward the construction of a different, wetter future.

Without collectively walking the river, I would think and research with a simplified understanding of river ecology and history- one which ignores data and perspectives for the sake of a more manageable abstraction. 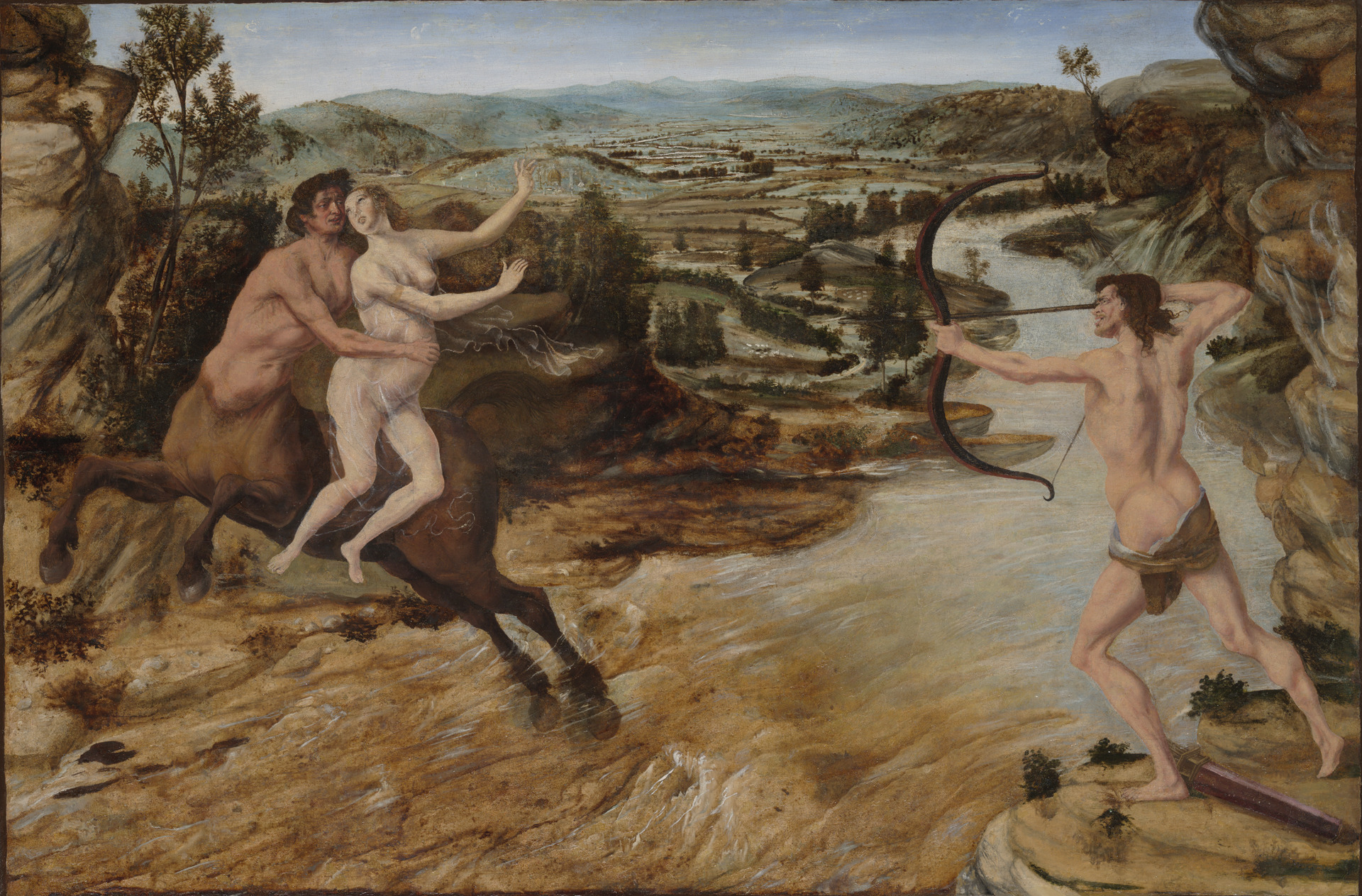 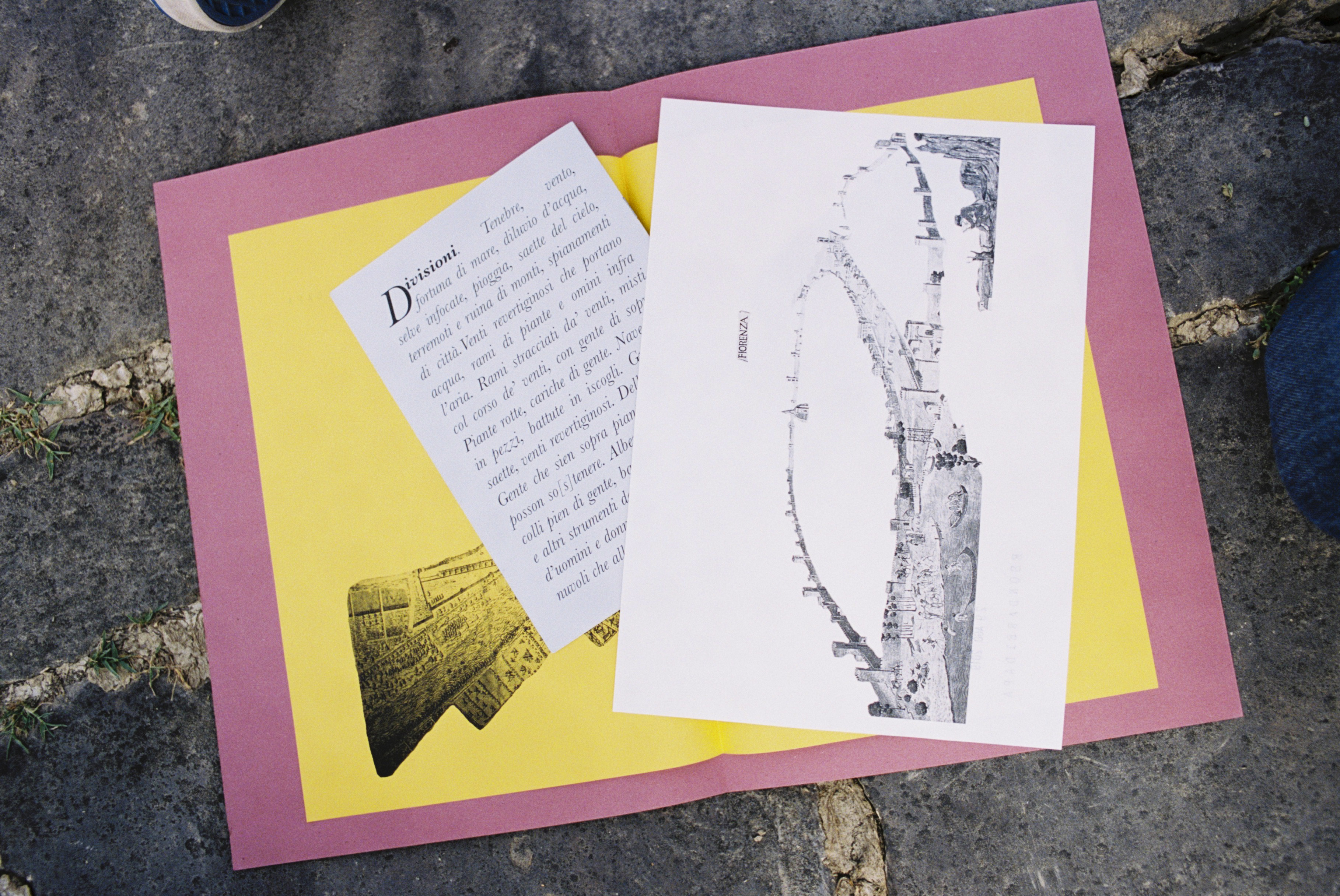 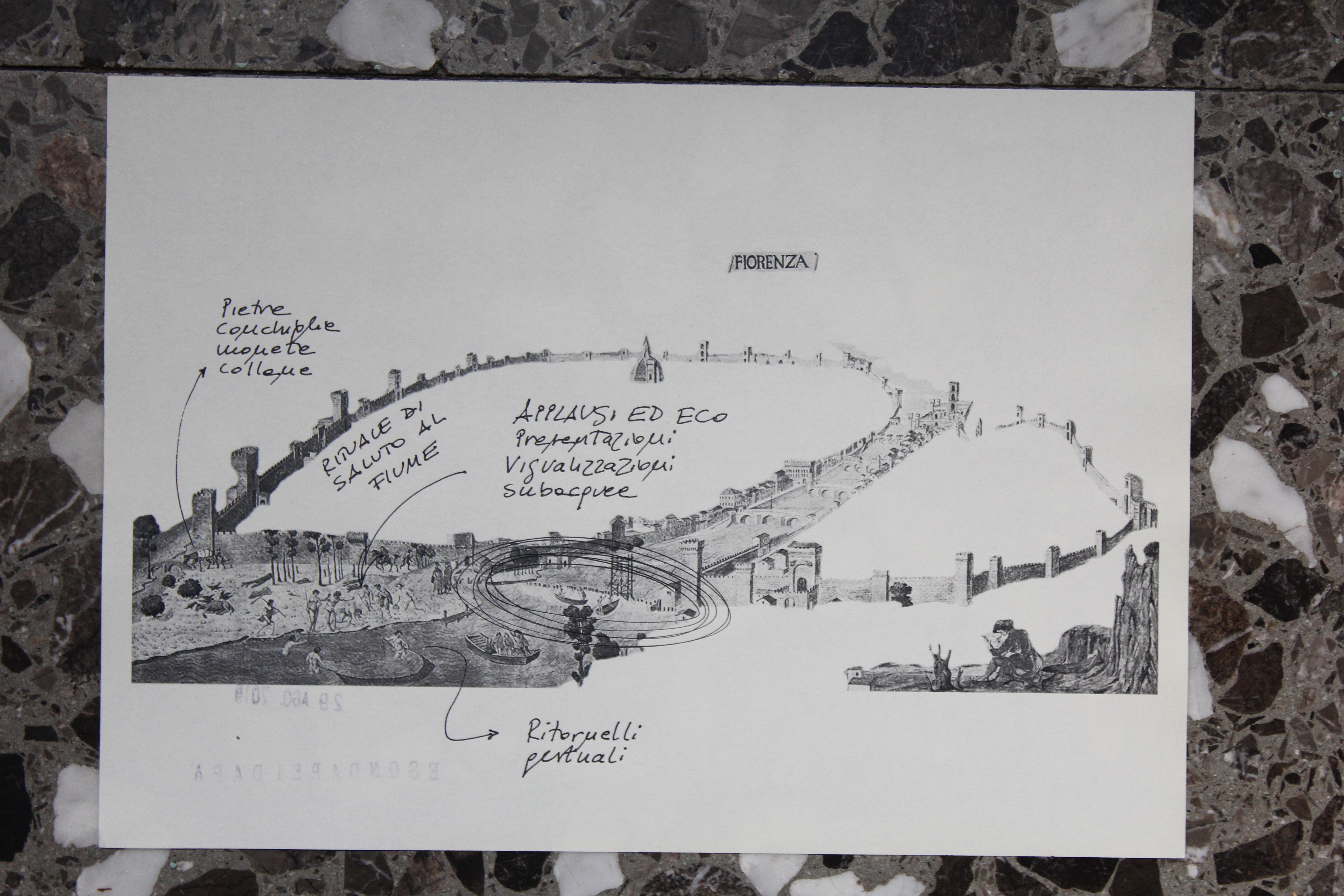 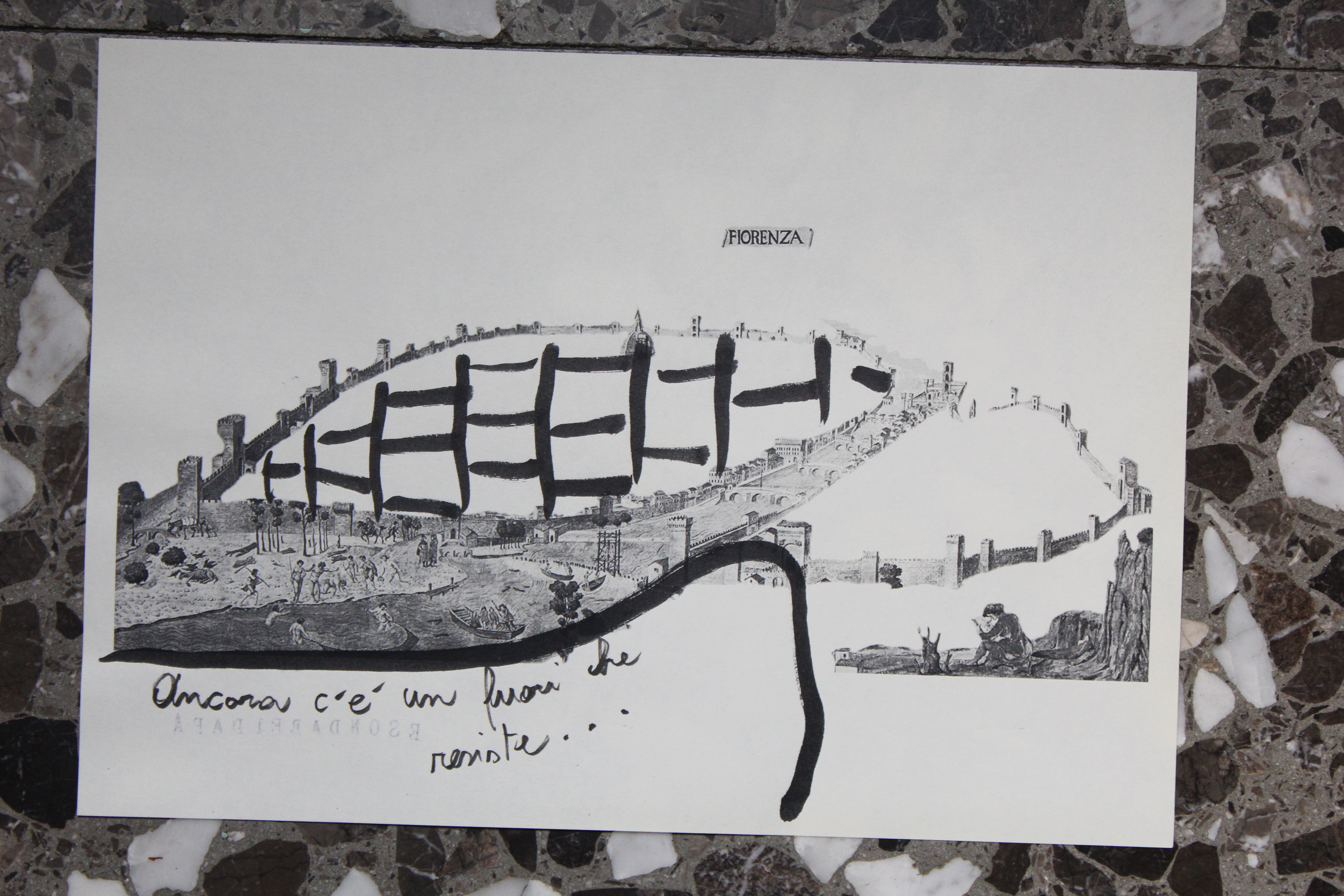 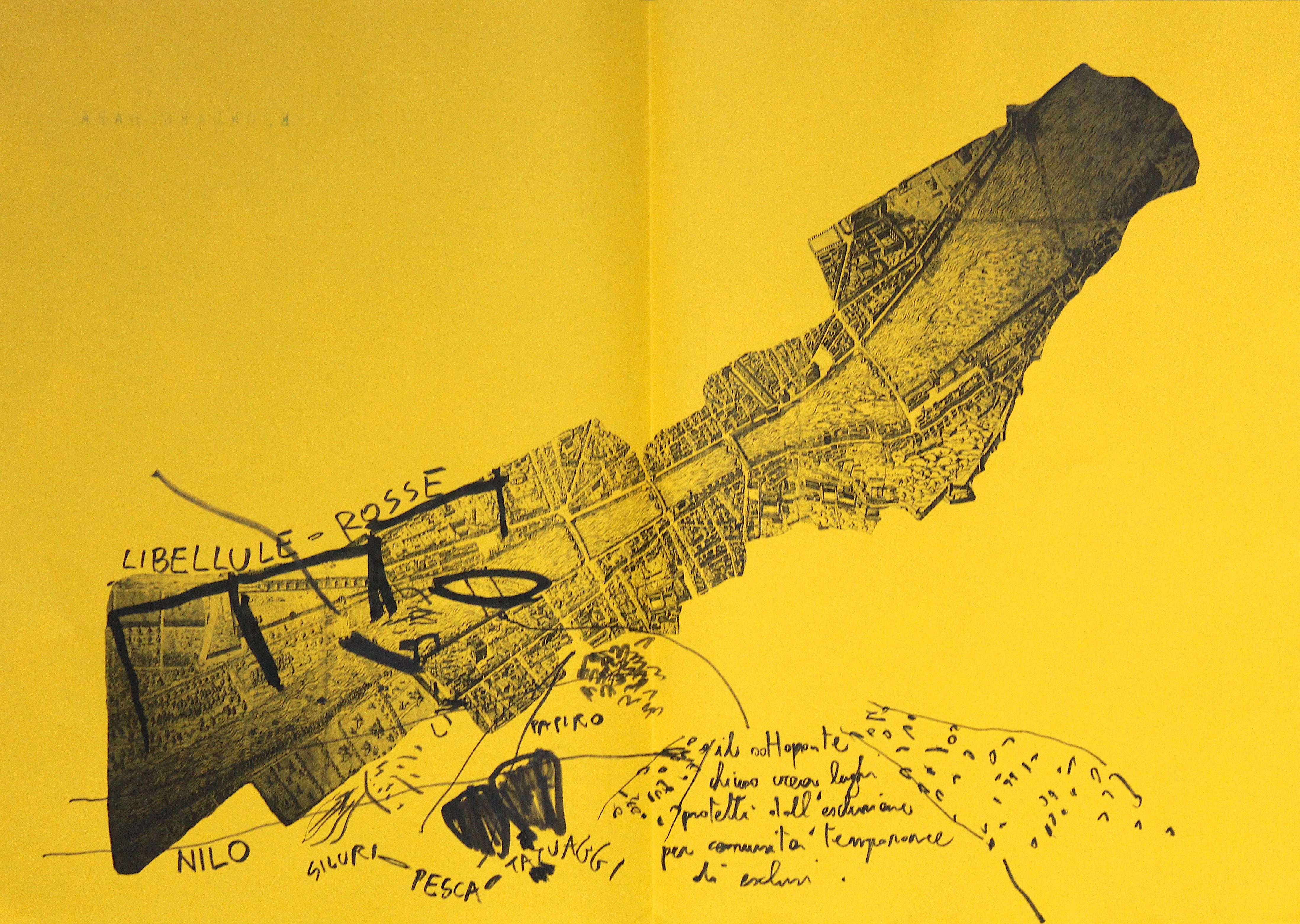 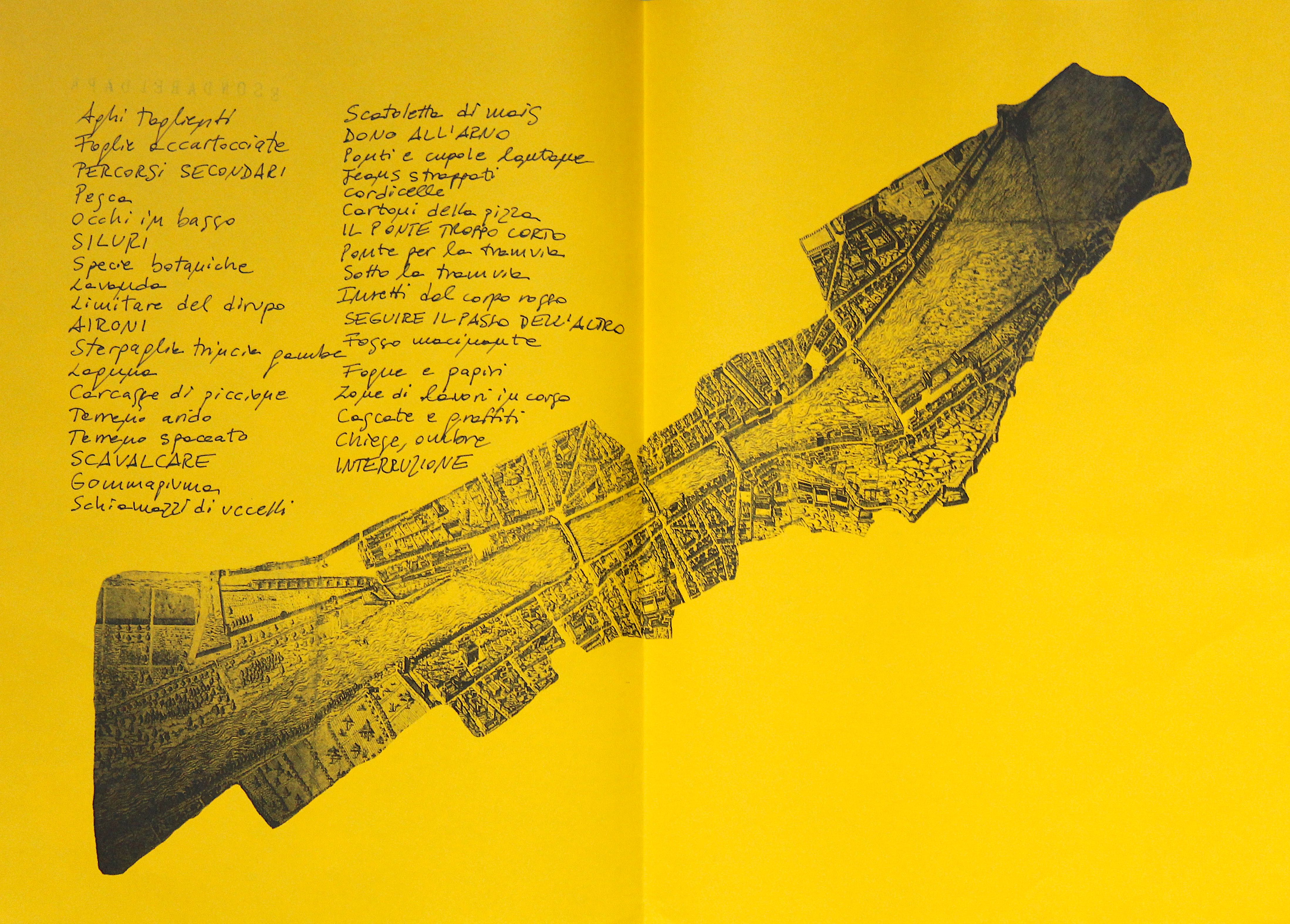 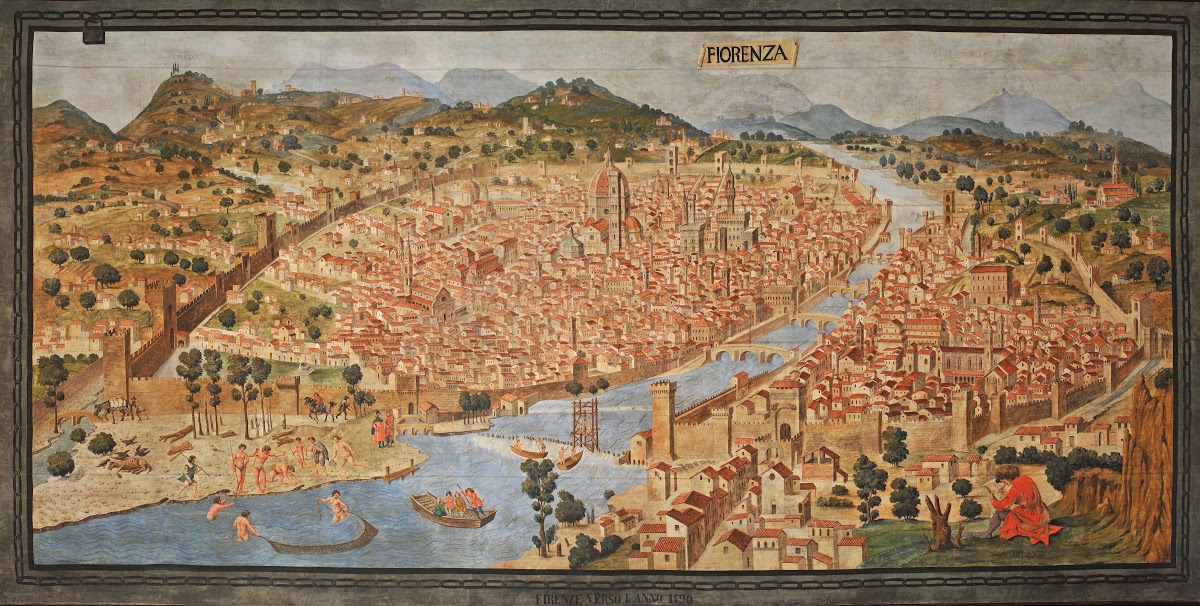 This was a pilot walk in which dissertation materials and ideas were tested in an unusually public context against the expertise and expectations of the other organizing members and participants. Next summer we will hopefully be able to experiment further, running more walks with an extended network of collaborators.