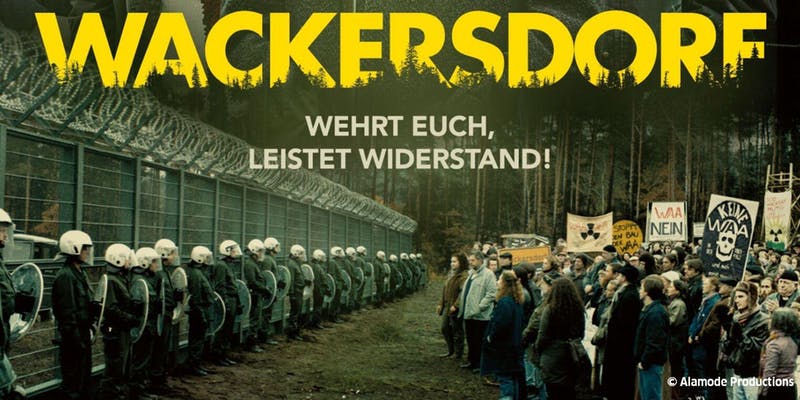 The Penn Program in Environmental Humanities and Slought, in partnership with the Department of Germanic Languages and Literatures, the Heinrich Böll Foundation, and Penn Cinema and Media Studies are pleased to present a special screening of excerpts from "Wackersdorf" (2018), a true story of a Bavarian community taking a stand against injustice and corruption, and a local-level politician taking on a much stronger governing power. The program will be introduced by Professor of Germanic Languages and Literatures, Simon Richter; following the film program, director Oliver Haffner and cinema studies scholar Prof. Rahul Mukherjee will engage in conversation, followed by public Q&A.

The film, a slow-paced political thriller inspired by true events, explores the economic situation in the town of Wackersdorf, Bavaria in the early 1980s, which has been hit hard by the industrial crisis. As district administrator Hans Schuierer's re-election is in danger, a message from the Bavarian State Government is welcome news: the plan is to build a nuclear reprocessing plant in Wackersdorf that will create many new jobs. Initially unaware of the potential irreversible damage associated with a nuclear reprocessing plant that the ministry hopes will be a region-saving project, Schuierer is confident that the economic future of his district is secure. Schuierer soon becomes suspicious, and supported by activists and the local priest, Schuierer becomes an outspoken opponent of the planned construction and a figurehead of the protest movement. Defying disciplinary proceedings from the Bavarian state government, he also shows the power of a small group of activists that grew into an organized movement.

In our era of changing climate, how can we facilitate candid conversations around energy transition and industry influence in politics? How can we embrace rapid decarbonization, which we know must happen to avert global warming's worst effects? Attention to legacies of citizen action and civil disobedience is crucial, as well as caution surrounding the risks posed by purely technical solutions. From the partial meltdown at Three Mile Island near Harrisburg, Pennsylvania in March 1979, to the Chernobyl disaster in Ukraine in April 1986, to the Fukushima Daiichi nuclear disaster following a devastating earthquake and tsunami in March 2011, it is critical that we keep histories of nuclear disaster present in our conversations around cultural and economic transformation.

Oliver Haffner was born in 1974 in Germersheim, Rhineland-Palatinate. He grew up in Munich and briefly studied Political Science at the Ludwig Maximilian University of Munich, before transferring and completing his studies in Theater Direction at the Max Reinhardt Seminar in Vienna. He worked as a director for the stage at the Vienna Festival (Wiener Festwochen), the Pfalztheater Kaiserslautern, the Schauspielhaus Bochum, Theater Ulm, the Linz State Theatre, Theater Regensburg, and the State Theater of Lower Austria. He studied Feature Film Direction at the University of Television and Film Munich; his graduation film, Mein Leben im Off (2010), was his debut feature film, and appeared in many German cinemas. Wackersdorf is his third feature film. Haffner is a professor of „Media-Specific Representation“ (film-acting) at the Konrad Wolf Film University of Babelsberg and a freelance lecturer at the Music and Arts University in the City of Vienna. He continues to be active in both theater and film. Haffner lives and works in Munich and Berlin.