In this post, Professor Steve Mentz (St John’s University in New York) explains how the historical model of “wet globalization” can inform our thinking about present concerns, and introduces his most recent book, Ocean (Object Lessons/Bloomsbury Press, 2020). This is the first entry in the Blue Notes series, edited by Aylin Malcolm. Read the series introduction here.

Several years ago, during another time of crisis, I woke in the middle of the night with an idea bursting my head. Trying not to wake my sleeping partner, I stumbled out of bed in search of light and a pencil. All I could make out of my scrawled notes the next day was a gnomic phrase that’s been re-ringing during these times of Covid-19:

It made sense then, and it makes sense now. Global movements of people, goods, and viruses disseminate suffering. Globalization requires transportation, circulation, exchange. These activities generate physical and cultural friction, abrasive contacts that support economic growth but can also hurt people and break systems. Global connections in the twenty-first century float on the seas and fly through the air, bringing wealth, knowledge, and pleasure to many, including virtually all of the people who will read these words. But these global systems also bring…well, right now we know exactly what’s circulating in our world, in global networks and in human lungs, to our collective and in too many cases very personal suffering.

In March, as we were all locking down, I published a little book about the biggest thing on our planet. Ocean starts at the beginning, with planetary formation four and one-half billion years ago, but its hinge-moment looks at the “wet globalization” that brought the human and nonhuman ecologies of Afro-Eurasia and the Americas into contact in the late fifteenth century. The most consequential passengers on those infamous caravels, the Niña and the Pinta, and the larger carrack the Santa Maria, were neither the sailors nor the Admiral but the nonhuman stowaways, the viral and bacterial populations that would transform all the creatures they would encounter in the so-called “New World.”

One of the chapters in Ocean takes the measure of the “wet globalization” that integrated the ecosystems of the Old and New Worlds, bringing horses to the American plains and tomatoes to Italy. I’ve been thinking back to it as we witness a “novel” virus sweeping through populations that have never previously been exposed to it. I tried in this chapter to do justice to the human suffering and dislocation visited on Native American populations through invasion by sea. Watching the statistics out of New York City, where many of my students live, and also in Connecticut, where I live, I’m not certain that I got all the way to the painful heart of the matter. Was I distracted by Ocean’s enticing blue, which sometimes obscures the pain beneath its glittering surface? Was I reflecting my own relative ignorance of non-European materials, including Native American records and writings?

I’m guilty of both those errors, and my quarantine ruminations have me reconsidering the costs in suffering of the Romanticized sea-lyricism that’s dear to me and to many of the books I love. But I will excerpt here a trimmed version of my chapter “Wet Globalization: The Premodern Anthropocene.” It tells an ocean-flavored story of environmental catastrophe and human hubris that reflects, in some senses, our current reality. 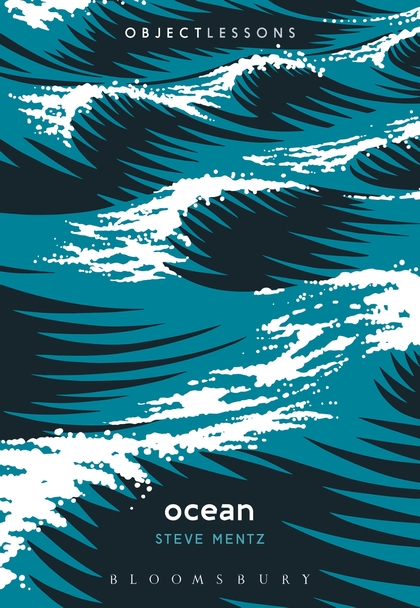 When the supercontinent Pangea fractured and began to drift into distinct continents 750 million years ago, the ecosystems of the newly separated land masses began to diverge from one another. Only limited contact ensued between the massive land mass on which humans first evolved, Afro-Eurasia, and the distant ecosystems of the Americas. During the most recent ice age, which ended around 12,000 years ago, water levels were low enough that many animals, including humans, traveled across the land bridge connecting Siberia to North America. But after the ice melted and the seas rose, the separation of the ecospheres became closer to absolute. Birds crossed the oceans, a small number of Viking ships crossed the North Atlantic around 1000 CE, and the range of maritime exploration of Pacific Island cultures remains difficult to discern precisely. But in broad terms, the living networks and human ecologies of the Americas remained separate from those of the larger connected landmass of Afro-Eurasia between the dawn of history and the late fifteenth century CE. During many thousands of years, animal, plant, viral, and human ecologies on each side of the Atlantic and Pacific basins developed in isolation from each other. The overfamiliar date of 1492 fingers Columbus at the start of a new era of ecological globalization. In the phrase of earth systems scientists Simon Lewis and Mark Maslin, this period witnessed the creation of a “New Pangea” that relinked the ecologies and economies of once-sundered continents.

Many different names have been proposed for the period in which European sailors took to the World Ocean, encircled the planet, and began to occupy the global spaces of world history. The environmental historian Alfred Crosby proposed the term “Columbian Exchange” in 1972, inaugurating a tradition that would treat Columbus’s voyages to the Americas as the essential first steps in global transformation. Crosby’s focus, however, was on an ecological process not an individual. He focused on the physical interweaving of the living and nonliving networks of the sundered parts of Pangea. Bringing these ecosystems back together, he observed, pushed unlike systems into becoming increasing like each other. “That trend toward biological homogeneity,” Crosby wrote, “is one of the most important aspects of the history of life on this planet since the retreat of the continental glaciers.” Charles C. Mann’s two works of global ecohistory, 1491: New Revelations of the Americas before Columbus (2005) and 1493: Uncovering the New World Columbus Created (2011), have done much to communicate the consequences of Crosby’s vision. Mann emphasizes the “role of exchange, both ecological and economic” in what was “not . . . the discovery of a New World, but its creation.” In an almost certainly vain effort to avoid canonizing individuals, I have suggested that we ignore Columbus and instead describe this period as “wet globalization,” because its crucial technology was the oceangoing ship and its anti-fundamental environment the sea.

Sea travel connected humans, nations, empires, and religions—not to mention plants, animals, viruses, and ecosystems. Globalization operates now and has always operated through sea routes, from the Spanish silver trade that linked the Pacific coast of the Americas to the Philippines to China in the sixteenth century through efforts underway by the summer of 2018 by Russian ships to open the Northwest and Northeast Passages through no-longer-icebound Arctic waters. Even though today most individuals, at least most relatively wealthy individuals, travel the globe by air, the goods that comprise the global economy still travel by ship. Shifting our attention from firm ground to the unstable fluid covering most of our planet’s surface emphasizes that many events in the so-called Age of Discovery emerged through forces and encounters that were largely beyond the control of individual humans. The well-known figures who have been canonized as “discoverers” or “explorers” were not in control of their voyages. It may be too late at this point to rename the “Columbian Exchange” with less focus on one man, though one of my arguments for “wet globalization” is the way the phrase captures the impersonal nature of the forces at work during this period. The World Ocean, with its interwoven patterns of currents and prevailing winds, drove the populations of the separated continents back together. No single mariner, nation, or community fueled those voyages by themselves. The New Pangea floats on the sea. 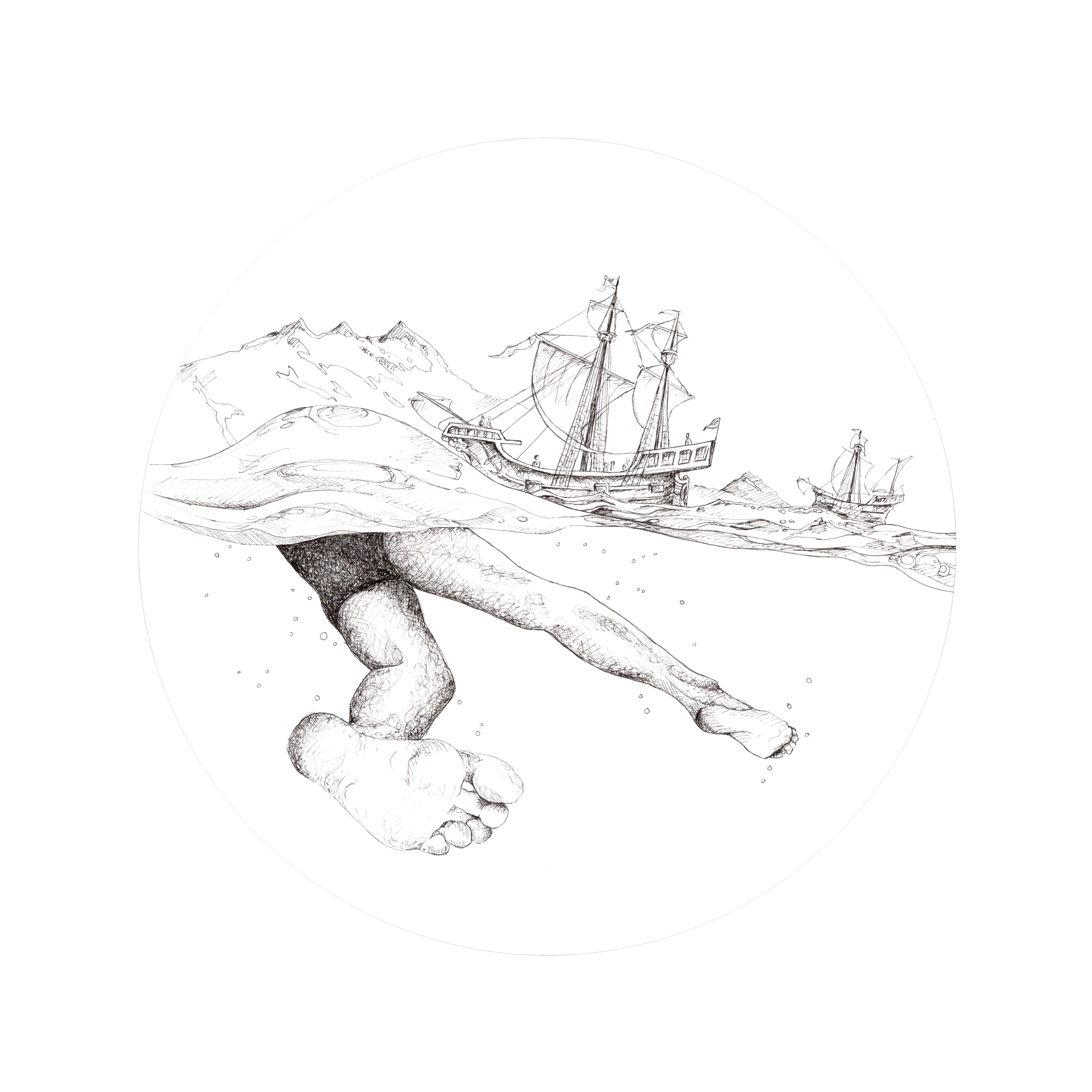 Illustration by Vanessa Daws from Ocean (2020).

For Lewis and Maslin, in their earth systems science perspective, wet globalization in the early modern period marks a new phase in anthropogenic climate change. This period, they argue, fixes the origins of the modern world ecosystem. In nominating the year 1610 as the “Orbis Spike,” their proposed “Golden Spike” marker inaugurating the Anthropocene, they emphasize the more-than-human consequences of this moment in human history:

In Earth systems terms it is the last globally cool moment before the long-term warmth of the Anthropocene, and the key moment after which Earth’s biota becomes progressively globally homogenized . . . thereby setting Earth on a new evolutionary trajectory.

The scientists choose 1610 as an observed minimum for carbon levels after the substantial depopulation and subsequent afforestation of the Americas. Carbon output would later increase rapidly after industrialization and global population growth up to and through to the present day. While as a humanities scholar who believes in stories, I remain suspicious of all magic numbers, their nomination of 1610 makes a valuable contrast to Columbus’s 1492. For Lewis and Maslin, the Age of Man begins as an Age of Death: historical estimates of the death rate of Native American populations estimate that at least 70 percent of the pre-contact population, and perhaps as high as 90 percent, died within the first 150 years after the arrival of Europeans and the viruses that sailed with them. Total human casualties during the period of contact and early colonization range from 50–76 million. European settlers planted their flags on depopulated American continents. “The arrival of Europeans in America,” Lewis and Maslin write, “probably killed about 10 per cent of all humans on the planet over the period 1493 to 1650.” The decimation of the Americas in the early modern period holds up a horrific mirror in which we can glimpse worst-case scenarios of large-scale climactic disruption today. The bleak visions that David Wallace-Wells describes in The Uninhabitable Earth (2019) approach, at their worst, the destruction wrought on the indigenous cultures of the Americas during the early modern period. Lewis and Maslin show that the key underlying technology that dramatically reshaped our environment on a planetary scale was long-haul transoceanic shipping:

The 1610 Orbis Spike marks the beginning of today’s globally interconnected economy and ecology, which set Earth on a new evolutionary trajectory. [. . .] In narrative terms, the Anthropocene began with widespread colonialism and slavery: it is a story of how people treat the environment and how people treat each other.

The World Ocean flowed with the blood of Native Americans in the years after contact. Soon after the drowned bodies of the Middle Passage would further stain the waters.

From the bloody waters of conquest, slavery, and settlement emerged the new ecological order of globalization. The material and symbolic centrality of two genocides—the disease-plus-colonialism-driven extermination of Native Americans, and the brutal displacement of the transatlantic slave trade—places early modernity’s crimes in oceanic context. The key technology for both forms of oceanic globalization was the sailing ship. In his autobiography of being captured and sold into slavery, The Interesting Narrative (1789), Olaudah Equiano emphasizes his shock when he first saw “the sea, and a slave ship,” which things “filled me with astonishment, which was soon converted into terror, which I am yet at a loss to describe.” Seeing in the ship and its festering hold the monstrosity that would rupture his life, Equiano faints. Many years later he writes his way into partial understanding. Édouard Glissant would expand upon Equiano’s vision by claiming that the slave ship and the Caribbean waters into which African bodies were thrown capture the hard birth of something new in the world:

This boat is your womb, a matrix, and yet it expels you. This boat: pregnant with as many dead as living under sentence of death.

The multiplicity that Glissant names Relation launches itself out from the womb of the Middle Passage.

Wet globalization links Glissant’s painful birth into modernity with the re-suturing of the global ecology into a “New Pangea” described by Lewis and Maslin. This premodern Anthropocene—the world humans built, intentionally and not, from the late fifteenth century forward—relies on and is unimaginable without the structural movement and violence of the sea. 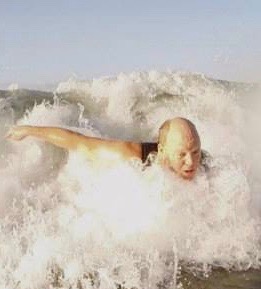 Steve Mentz teaches Shakespeare, the blue humanities, and ecocritical theory at St. John's University in New York City. His most recent publications are the books Ocean (Bloomsbury/Object Lessons, 2020) and Break Up the Anthropocene (Minnesota/Forerunners, 2019). He blogs at The Bookfish (www.stevementz.com) and occasionally tweets @stevermentz.