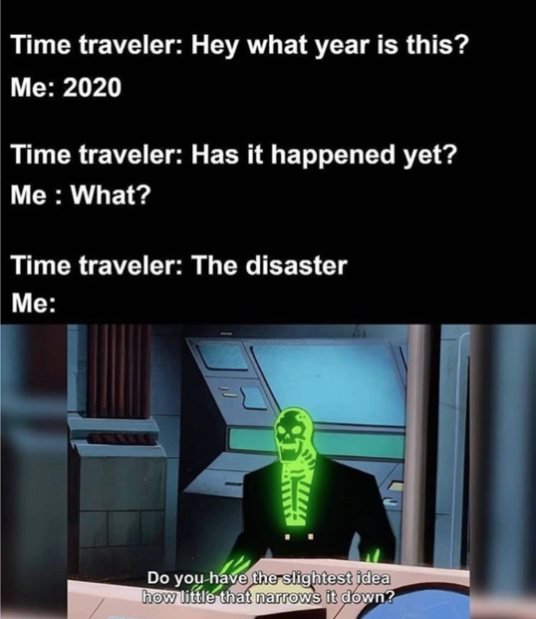 2020 has been a lot. Along with everything else it’s brought, it’s also the year when the present seems finally to have caught up with the future. No longer subject of a forecast, the future seems to be happening now. Maybe that’s why the best guides to 2020 have been science fiction writers. I know I’m not alone in finding terribly topical advice amidst Octavia Butler’s lyrical Parable of the Sower.

A lifetime ago, in 2018, the IPCC’s Special Report on 1.5 degree (Celsius) warming held open a window for twelve more years for CO2 reductions that would prevent global warming from reaching a planetary boil. In 2020, temperatures across some 10% of the globe’s area were averaging 2 degrees (C) warmer than before. While the climate reporting team who broke this story won a Pulitzer, the story was lost amidst the “other” global crisis. (As we now realize, the covid-19 pandemic is not distinct from the climate crisis, in that both share a contributing cause: the loss of habitat and biodiversity.) The horsemen predicted for 2030 showed up early. As climate scientist Adam Sobel told PPEH Public Research Intern, Tsemone Ogbemi, a member of PPEH’s Climate Storytelling team, in an interview this summer, “N.K. Jemisin is a god.” (Stay tuned for the podcast episode.) Octavia Butler’s narrator in Parable is pretty hard on herself, “I wonder why it’s taken me so long--why there was ever a time when I didn’t understand a thing so obvious and real and true” (78). As crisis upon crisis unfurls as a “new normal,” Butler’s narrator might be excused for missing the obvious and real and true. Maybe we could be too. It’s a lot.

In 2019, PPEH embarked on a public storytelling and story sharing campaign designed to document how members of Penn’s community were experiencing climate change in diverse heres and nows. Individuals’ climate stories are geo-tagged and placed in a growing climate storybank. The climate storytelling initiative developed first within a data storytelling project that we wrapped up in May, culminating in the virtual convening, Climate Sensing and Data Storytelling. With more than 300 stories in the storybank, we’re re-organizing and adding better metadata. With hundreds more expected in the coming months, we’re hiving off the climate storybank to make its navigability easier and to improve story metadata. The repository’s stories--written tales, spoken words, images--will also be subject of a video documentary and companion illustrated workbook of stories, a kind of cookbook full of recipes to tell and share different climate stories. This year and next, the storytelling and story sharing campaign is exclusively online and includes live workshops we’ve offered with audiences as young as middle school.

Our team--Tsemone, Connor Hardy, Danny Cooper, and I--began working together over the summer as part of the research group Beyond the Lab. Working in tandem with the College at Penn’s task force on ecological and climate literacy in the liberal arts curriculum our work also builds on the digital tools past team members developed, including the animated how-to-tell-a-climate-story 3-minute video by Grace Boroughs, Katie Collier, and Evie Sorrel as well as the storytelling prompts available in 15 world languages developed by Meg Arenberg with help from speakers of languages from Arabic to Spanish, the Penn Language Center, and the team behind Kelly Writers House journal for literary translation, Doublespeak.

Danny Cooper developed an ongoing Instagram campaign featuring climate stories of more than human species. Tsemone Ogbemi piloted Imagination Machine, a newsletter inspired by the fact that in the age of climate crisis we need all our collective imaginative powers to create more inclusive futures (scroll down on this page for the link to subscribe.) Working together this fall, we have offered four online workshops and will present two more in December on zoom with 6th graders at the Andrew Hamilton School.

Our team meets twice weekly. In the winter, we will begin training others in the greater Philadelphia area both to write their own climate stories and to learn to host climate workshops for their schools and organizations. Contributed stories will feature in the project’s companion illustrated workbook and video documentary scheduled for production in April-May 2021. Now, in mid-November, and in the middle of a second pandemic wave with its swell of case numbers and closures, our team’s regular Monday and Friday meetings offer a rhythm amidst this new normal, an off-kilter and ethically dubious phrase. For those, like the Climate Storytelling team, lucky and able to work from home, Margaret Atwood’s Snowman offers a mantra, “I have a daily routine...Routines are good.” The emotional tenor of Atwood’s post-diluvial world in Oryx and Crake can be tailored to 2020. Against the backdrop of a relentless news cycle, Snowman’s lament might be yours too, “I used to be erudite.” Writing after the apocalypse, the narrator wonders, “Erudite. A hopeless word. What are all those things he once thought he knew, and where have they gone?” (148).

Our climate storytelling workshops don’t make participants erudite. They do, however, foster the recognition that we are all--differently and often unfairly--inhabitants and creators of a rapidly changing earth system. The future is here, but what it portends remains unclear. “Uncertainty” is my candidate for 2020’s word of the year. The candidates for best meme are legion. My pick:

While the future is here now but the contours of the future in the future blank, we can nevertheless fill in some of the blank. For all its tragedy and garbage, 2020 has made ever clearer:

PPEH’s public Climate Storytelling curriculum, our team’s modest effort to promote public climate literacy, is free for all. To learn more about workshops in 2020 and beyond, including about how to host one at your organization, drop us a line at director@ppehlab.org.