Climates of Inequality and Postures of Collaboration

PPEH’s public-facing work strategically unsettles traditional boundaries between university communities and wider publics. It aims at helping build multi-scale networks of scholars, activists, artists, and practitioners working on issues of environmental justice. This work is a crucial to forming the collaborative communities necessary to forge livable futures that might also be more equitable. To this end, we joined the Humanities Action Lab (HAL), a coalition of universities, issue organizations, and public institutions that collaborate to produce community-curated public humanities projects. Multi-year projects take on urgent issues--from the public memory of Guantanamo to the incarceration crisis in the U.S., and the related exhibits travel nationally and internationally to the communities that helped create them and are exhibited on campus, as well as in public museums, libraries, and other cultural spaces. 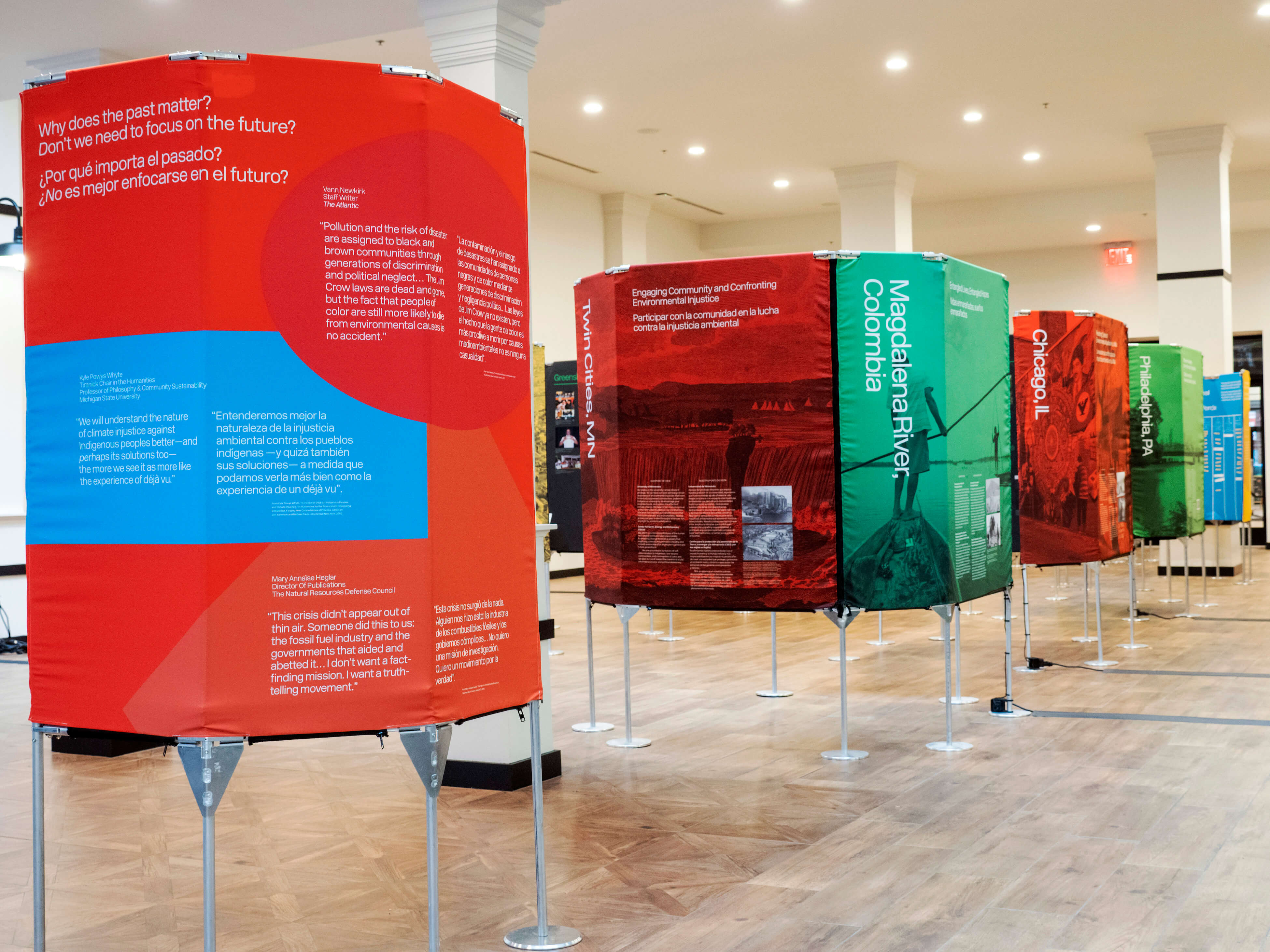 October 2019 marked the launch of the Humanities Action Lab’s latest traveling exhibit, Climates of Inequality (pictured above), featuring collaborations between partner institutions and community groups in 22 cities across the world to explore the roots of climate and environmental inequality in their hometowns and to envision more just futures. (Watch a short documentary about the project featuring stories from several of the partners here).

As first a consultant on and then a partner in this ambitious project, PPEH drew on its ongoing community-based participatory research in the SW Philadelphia neighborhood of Eastwick and especially the collaborative Eastwick Living Histories Project. Over the summer of 2019, public research interns Lucy Corlett (C’20) and Jacob Hershman (C’20), developed PPEH’s contribution to the HAL exhibit, “100 Years in the Middle.” With support from PPEH staff and faculty, Lucy and Jacob created two beautiful panels and additional web resources, distilling many years of public research with Eastwick community members, to create a snapshot of residents’ experiences of their neighborhood in the past and present, and their hopes for its future. 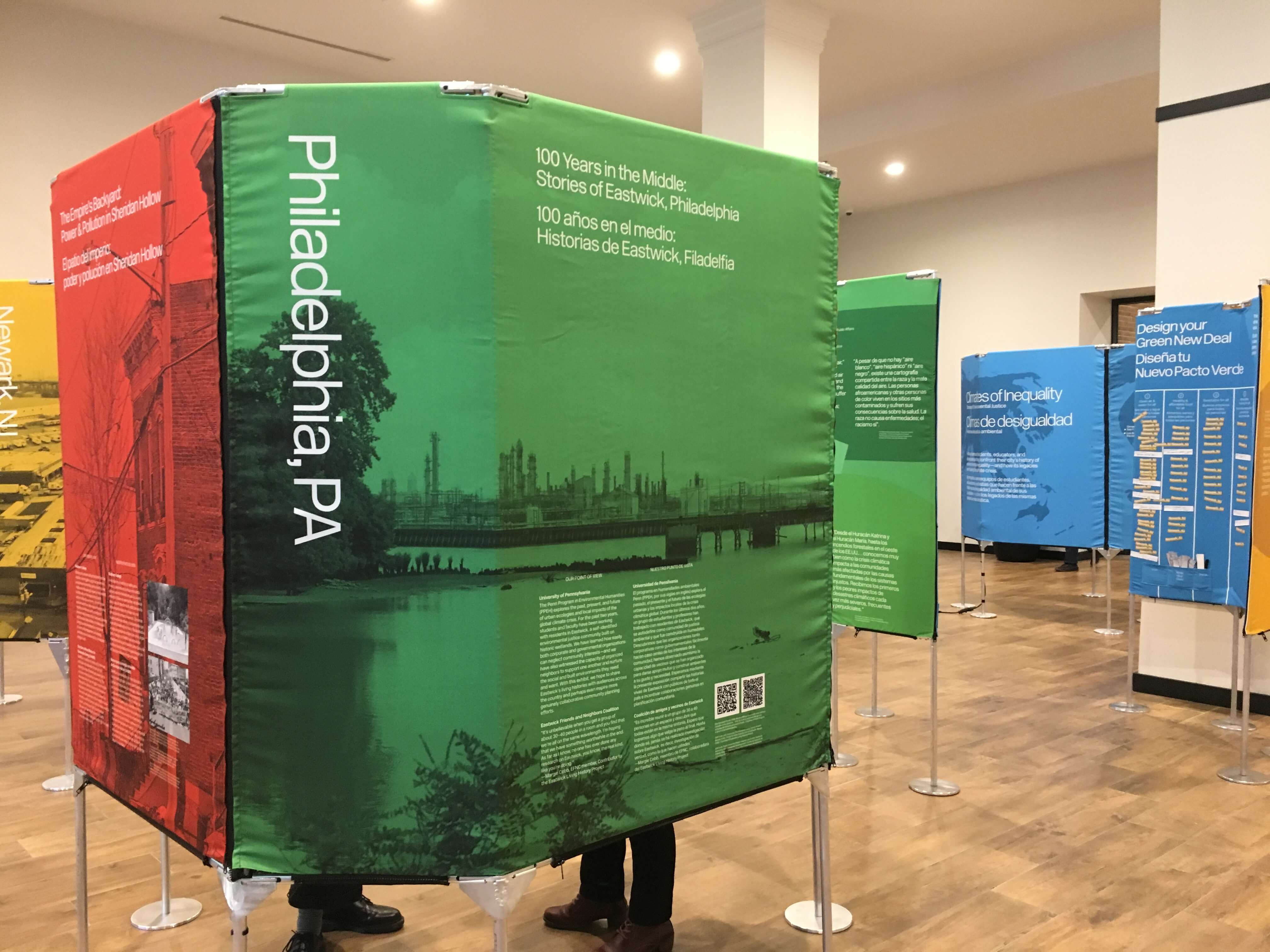 In early November, Lucy and Philadelphia District School Teacher Rachel Odoroff (a student in Bethany Wiggin's TIP seminar in Spring 2019) joined PPEH Managing Director Meg Arenberg at HAL's International Launch Convening to meet with other students and community partners, share stories and gather together wisdom from the disparate sites of the project.

In response to the prompt: "How can we activate our collaboration around this project into a memory movement for climate justice," Lucy presented the following lightning talk on Philadelphia's contribution:

As they reflected on their experience following the HAL meeting, Lucy and Rachel described a rare opportunity to listen to first-hand accounts of climate injustice and spoke about their renewed commitment to working in Philadelphia:

"For me, the convening was the first time I was really able to confer with people (outside of Philadelphia) who deal with environmental and climate threats on a daily basis. I was inspired by the work of other university-community partnerships, from earthquake response in Mexico City to the protection of indigenous lands in Minnesota. It felt really good to present about Data Refuge [and its living archive of Climate Stories] at the end of the second day of the convening, as so many of the attendees expressed that they needed a safe place to preserve their climate stories for current and future use. Overall, attending the convening reinforced the importance of PPEH's work here in Philadelphia and at Penn, and urged me to think deeply about combating climate inequality at a local and global level."

"It was nice to step out of my normal role as teacher and just listen for a bit. The hard work that so many local community groups are doing to fight for environmental justice was inspiring. The personal stories were particularly meaningful. There was a healthy debate about the use of data versus the impact of stories/narratives.  I'm pretty sure both are around for the long haul, but it did make me want to assign my students the task of talking to parents and grandparents about their sense of climate change.  I am looking forward to implementing my project in the spring with my 8th Graders from West Philly!"