Jogging on a summer evening in Florence almost two years ago, I suddenly realized tourists sitting on the ramps of Piazzale Michelangelo were applauding the setting of the sun over the Arno river. A few minutes before, I had crossed the Arno on my way up towards the Piazzale, and had felt repulsed and disappointed by the putrid status of its waters and riverbed. Nevertheless, dozens of people crammed on the Ponte Vecchio to take pictures of the riverscape, and they referred to the experience as ‘beautiful’.

That day, I started thinking that to the millions of people who pass through the city every year and take selfies or applaud while watching the sunset over the river from its bridges or from Piazzale Michelangelo, the Arno is neither water nor organic matter. It is the surface that shines at sunset, a minor element in the cityscape they came to see.  The narratives of tourism play a crucial role in determining this ideological perception of landscape. A particular perception of the cityscape as a postcard panorama is spread, in fact, through idealized representations that overfill cinema and the web. These images train viewers to see the river as a minor element within the pretty urban landscape. Mechanisms of selective interpretation and erasure are at stake here. Many people would say that Florence is “a beautiful city”, but if we focus on the Arno and its urban waters the picture gets muddier. 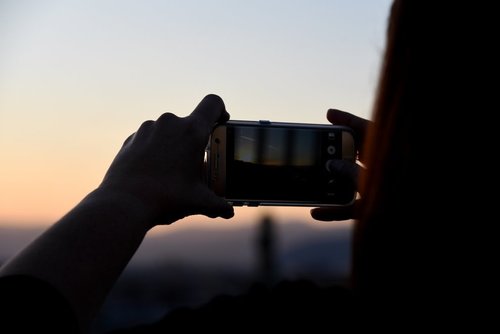 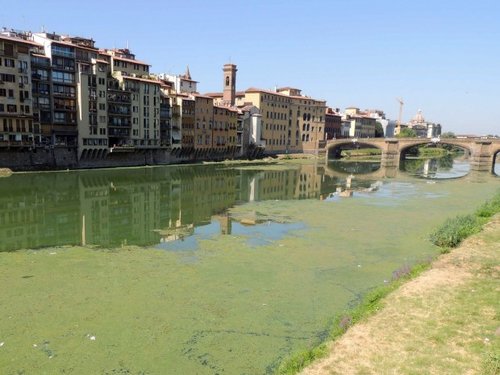 View of the Arno in between Ponte Vecchio and Ponte S. Trinita. From the website of the Italian newspaper La Repubblica, accessed 2017. Photo by Cge Fotogiornalismo.

Italian rivers and their waters cross cities which are almost homogeneously represented and perceived as beautiful. Their waters become a feature of an aestheticized landscape despite their exposed characteristics and the narratives of decay they emit, such as those implied in colors and material accumulations in the form of trash, dead fish and algae.

My project for the PPEH aims to bring together different sets of knowledge on those troubled sites, from the aestheticizing narratives in the arts on one side and scientific research on the other, in order to acknowledge and address the multiple narratives that stem from the river’s waters. I will attempt waterly readings of highly aestheticized and visible sites such as the Arno river in Florence, the Venice lagoon, and the Tiber river in Rome. By collecting material on Italian urban waters, I set out to explore the nets of meanings that are configured around them in different fields with the aim to identify areas of invisibility and forgetfulness.

How and why do people adjust representations in the arts to conform to certain narratives while ignoring stories stemming from matter and recorded in other forms of knowledge? What is gained and lost in processes of slight transformations that lead to the way we represent rivers and their waters in different disciplines?

The hydrographical elements of the Italian urban landscape represent a crucial node for the explorations of competing ways to define, interpret and narrate the data stemming from matter. As in that original run over the Arno, my primary concern lies in the way this information is selectively perceived, recorded, and proliferated by society.

Luna Sarti is a 3rd-year graduate student in the Italian Studies PhD program of the Department of Romance Languages at the University of Pennsylvania.