How We Talk When We Talk About Public Lands

In the United States, what constitutes “public lands” has never been stable. Notions of the public and their commons have been a fickle matter of political contest and power relations since before the beginning of what is currently called America. As the exigency of a changing climate increases the urgency of discussions of the commons, I have had the privilege of joining a group of humanities scholars to think through the stakes of current debates around US public lands.

Beginning in 2018 at the Environmental Justice and Public Lands symposium at the University of Oregon, on the homelands of the Kalapuya people, we continued through several conferences and a 2019 special issue of Western American Literature. Most recently, we converged to discuss “What’s Next” for public lands at the Western Literature Association’s conference (WLA) in Estes Park, Colorado. There, surrounded by the majestic Rocky Mountains on lands with age-old and ongoing relations to the Ute, Arapaho, Cheyenne, Kiowa, and over 40 other tribes, scholars Jenn Ladino (University of Idaho), Ashley Reis (University of North Texas), Leisl Carr Childers (Colorado State University), myself, and others had the honor of engaging with public intellectuals like Dina Gilio-Whitaker (author of the essential As Long as Grass Grows: The Indigenous Fight for Environmental Justice from Colonization to Standing Rock). Together, we considered who and what serves to underwrite, define, and profit from public lands. 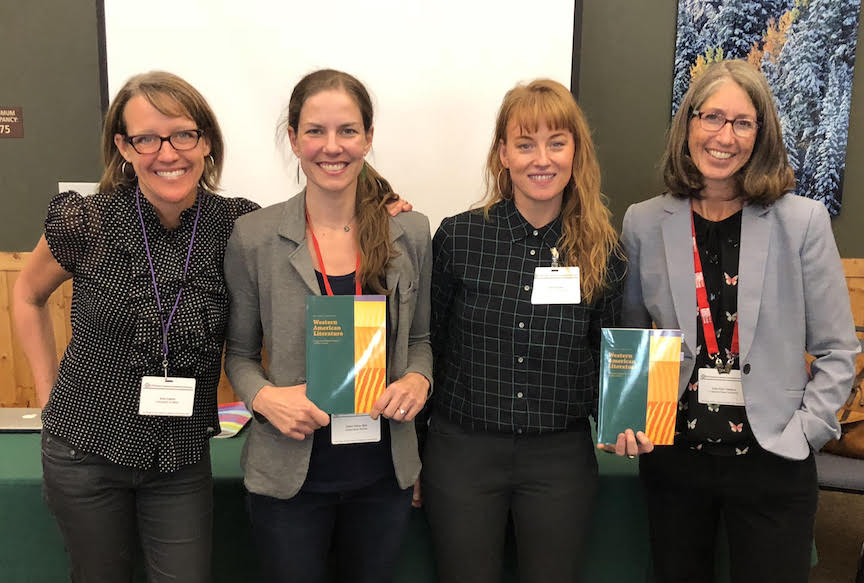 To date, my work around public lands has focused on the literary dimensions of these discussions, the ways that stories of the commons often still assume a public that is, in fact, particular to white settler subjects like myself. In Estes Park, I shared some recent work exploring the contemporary “Gold Rush-Style Grab of Public Lands” in historical literary context. Just as nineteenth century land use laws still regulate contemporary public lands, Gold Rush era literature of the commons–whether utopian, satirical, transposed, or dystopian–allegorize a white able-bodied male as the common body of the nation, racialized inequalities that continue to fence American public lands in to a story of the land-as-white property.

In truth, the Gold Rush era giveaway never went away. The context of a changing climate provides only the latest threat for an America allegorized through an individual white male body, most notably in manifestos such as those circulated by the El Paso and ChristChurch terrorists. Seen thusly, climate change can concretize this historical allegory or fundamentally unsettle what is meant by “This Land is Our Land.” It can evacuate the land of historical context, whitewash it of relations of power in favor of fear, forgetting, and, ultimately, the blood and soil imaginaries that foment in ecofascist ideologies. Or, in this recognition can be found vital rationale for viewing public lands, instead, as a verb–as an active and ongoing relationship to the various publics imagined and constituted through narratives about who and what belongs to the American nation. Each time we talk about public lands, we are invited to imagine and work towards those lands returned to the very particular publics to whom they belong. In truth, when we talk public lands, we make them.