The following post is part of the Exploring the Environments of Modernity series, featuring the voices of some of the organizers and participants of a symposium that explored the conceptual arenas of "environment" and "modernity" in the humanities and social sciences. Below, Aylin Malcolm reflects on saved and discarded objects, and what these distinctions might mean for not only our environmental futures, but our archival ones.

On the second day of the Environments of Modernity Symposium, Penn and the Slought Foundation welcomed Robin Nagle, Clinical Professor of Anthropology at NYU, anthropologist-in-residence at the New York Department of Sanitation, and author of Picking Up: On the Streets and Behind the Trucks with the Sanitation Workers of New York City. In her presentation, Nagle focused on two places in New York City: Dead Horse Bay and the “Trash Museum” created by the former sanitation worker Nelson Molina. Once the site of New York’s horse rendering factories, Dead Horse Bay was used as a landfill during suburbanization in the mid-twentieth century. As a result, its piles of detritus – cosmetic containers, soft drink bottles, broken shoes – provide a snapshot of 1950’s Brooklyn, or what Nagle called an “accidental archaeology.” In contrast, the Molina Collection is a curated sample of objects discovered in the trash. With its sculptures, musical instruments, and stained glass panels, Molina’s “museum” mirrors the demographics of the district he worked before his retirement, comprising wealthy stretches of 5th Avenue and parts of Spanish Harlem.

By analyzing these sites, Nagle invited her audience to develop new relationships to broken and discarded objects, which might become museum pieces or archaeological case studies after ceasing to serve their original purposes. Yet these two locations also exemplify the challenges of waste management in the twenty-first century. In particular, the rise of mass production has resulted in a vast amount of “disposable” products and items designed to quickly become obsolete, most of which now reside in landfills.

This decrease in the lifespans of manufactured objects is a fact that I frequently confront in my work at Penn’s Kislak Center for Special Collections, Rare Books and Manuscripts. Friends and family members are often surprised when I mention that Penn’s medieval books date back to the 9th century. I understand these reactions, because we would not expect modern books to survive that long. With their peeling covers and yellowed pages, many of my own books are already more decrepit than most of the medieval manuscripts (i.e. handwritten books and documents) in Philadelphia – not only treasures like the 750-year-old Lewis Psalter, resplendent in gold and lapis lazuli, but also the modest volumes that are more typical of the period, such as sermon collections and veterinary medicine textbooks.

To some degree, manuscripts like these owe their present conditions to resourceful conservators, but they were also constructed to last many lifetimes. Medieval bookswere written on the skins of livestock, which were de-haired using a lime solution and meticulously scraped as they dried on a frame. After each page had been hand-copied, many books were bound in durable wooden boards. In fact, the technical term for a book is “codex,” from the Latin “caudex” or “tree trunk.”

Few books are produced with this level of care today, perhaps partly due to the growth of electronic archives with a broad range of visual and auditory media. If you clicked on the second link in this post, you may have already encountered an example: the recording of Nagle’s talk on the Slought Foundation’s website. However, these forms of information storage have led to unprecedented environmental challenges, such as the large quantities of water and energy required to sustain data centers or the creation of electronic waste. [1]

In her book Digital Rubbish, Jennifer Gabrys describes this relationship between “e-waste” and our desire for “virtual” archives:

When electronic devices shrink to the scale of paper-thin and handheld devices, they appear to be lightweight and free of material resources. But this sense of immateriality also enables the proliferation of waste, from the processes of manufacture to the development of disposable and transient devices in excess. [2]

Whereas medieval books were made of flesh and wood, the veins and follicles of the original animal still visible beneath the text, e-readers are slim, portable, and easily replaced, making them challenging to conceptualize in terms of human and environmental costs. This “sense of immateriality” plays a similar role in cloud storage, a system that encourages us to develop large personal archives while remaining at a distance from their ecological effects. [3] Gabrys therefore suggests that researchers pursue “natural histories” of electronic waste to reconstruct the values and ideals of the past. In the remainder of her book, she demonstrates this method by analyzing five sites where defunct electronics accumulate, a project that resembles Nagle’s “archaeological” research on trash in New York City.

In addition to generating waste, rapid changes in archiving technologies might also result in the loss of important records. These interlaced issues became evident to me in May, when I visited the Huntington Library in San Marino, CA to assist with a multispectral imaging project. Multispectral imaging involves capturing images using specific light frequencies and processing them to reveal details invisible under natural light; it is used by environmental scientists to analyze satellite images, and is also how researchers deciphered a previously unknown text by Archimedes. At the Huntington, our small team led by Michael B. Toth of R. B. Toth Associatesimaged Benjamin Franklin’s own handwritten copy of his Autobiography, bringing out text that had been covered by spilled ink. For one Twitter user, however, the most striking aspect of the project was not the high-tech setup or the valuable book; it was the revelation that the Huntington imaging laboratory still uses a Mac tower from the beginning of the 21st century. 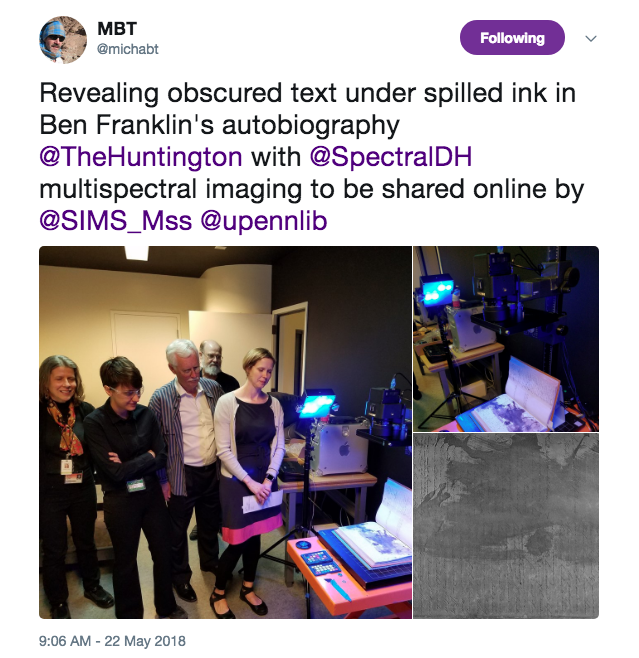 There are good reasons for keeping old hardware at libraries, which often have large amounts of data in obsolete formats. In a broader sense, however, this tweet has a point: it is remarkable that this computer has not been consigned to the scrap heap – indeed, more so than the good condition of Franklin’s eighteenth-century manuscript. This fact should, I think, provoke a sense of crisis. If the hardware that I used in high school is now obsolete, it is hard to imagine what will become of our records in a few hundred years. Barring unforeseen disasters, our most “important” digital materials will likely be preserved via constant conversion, but we may lose many of the marginal and quotidian texts that are vital for understanding the norms of the past.

Our present activities have long-lasting effects on global environments. While we accumulate waste materials that do not easily degrade – chemical pollutants, Styrofoam, the plastics that Nagle calls the “only-slightly-less-toxic counterpart to nuclear waste” – we also risk losing records due to our devotion to disposability, convenience, and the notion of progress. Nagle offers a response to this archiving crisis by investigating the records that we are most likely to leave behind. As she said in her talk, “everything is future trash,” such that “to throw things out is to throw ourselves into a distant future.” Yet I cannot help hoping for a future with stable ecosystems and carefully preserved documents, a future beyond Noxema jars and computer parts on a beach.

[1] For more information, see the work of Allison Carruth, Mél Hogan, Tung-Hui Hu, Lisa Parks, and Nicole Starosielski, whose book The Undersea Network is tied to a mesmerizing digital mapping project. These issues have become more visible recently due to Bitcoin and other cryptocurrencies, which use energy on the scale of countries.

[3] On the numerous relationships between media and clouds, see the work of another Environments of Modernity speaker: John Durham Peters, The Marvelous Clouds: Toward a Philosophy of Elemental Media (University of Chicago Press, 2015).

Aylin Malcolm (@Malentendre) is a Ph.D. student working at the confluence of medieval literature, manuscript studies, and the environmental humanities. Aylin studied Environmental Science at McGill and English at Ohio State before coming to Penn in 2016.