There is no question that Koko was a special gorilla. She not only learned how to sign, but also how to play the recorder – demonstrating controlled breathing which was thought to be impossible for nonhuman primates. However, scientists debated Koko’s ability to understand the meanings behind her words and actions. A Snopes article addressing Koko’s COP21 video claims the film is incredibly misleading, partially because communicating basic needs and communicating ideas are two different frames of language. Not only was the video scripted and extensively edited after several takes, but Snopes pressed that the COP21 video was a classic case of anthropomorphism – or, the projection of human qualities onto other animals. The article cites biological anthropologist Barbara King to make this case - who wrote that the video “distorts who Koko really is; it conveys the wrong idea about signed languages; and it undercuts the seriousness of climate-change discussion.”

The debate surrounding Koko’s COP21 video reminded me of Dr. Supriya Nair’s astute exploration of the animal gaze from her presentation at the Environments of Modernity symposium. In her talk, Nair explored the multiple dimensions of human-animal interactions in film and literature – taking cues from the tiger in Life of Pi, the birds in Hitchcock’s The Birds, and the primates in Planet of the Apes to discuss how and when humans are rendered as animals, animals made human, and the moments when the boundary between the two collapses entirely. Using theorists Jacques Derrida and Judith Butler, Nair made the case that the animal gaze was the site of this confrontation – epitomized in iconic moments from these films and books, among others. 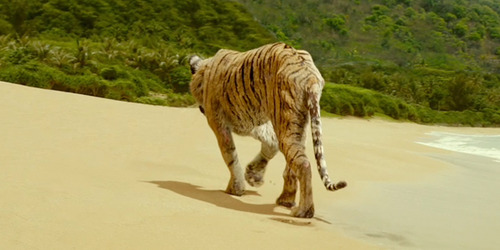 Nair also noted the end of <em>Life of Pi</em>, when Pi longs for a goodbye “look” or “gaze” from Richard Parker, which he is denied. &lt;em&gt;20th Century Fox.&lt;/em&gt; 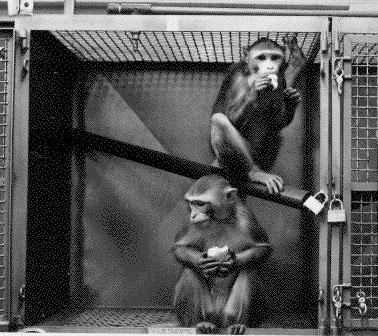 Two primates in a laboratory cage – a similar image to those shown by Nair during her presentation. USDA digital reproduction from &lt;em&gt;Wikimedia&lt;/em&gt;.