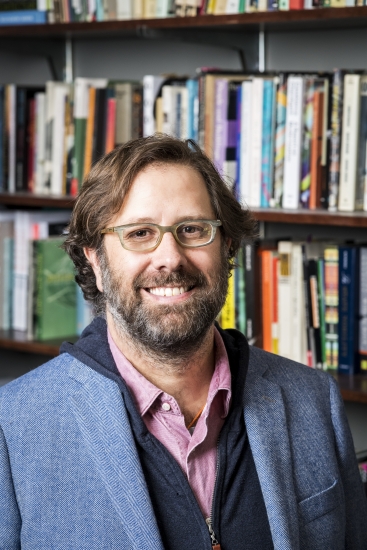 Daniel A. Barber is an Associate Professor of Architecture at Penn Design. He is an architectural historian researching the relationship between the design fields and the emergence of global environmental culture across the 20th century.

Daniel received a PhD in Architecture History and Theory from Columbia University, and a Master of Environmental Design from Yale University. He currently holds a Fellowship for Advanced Researchers from the Alexander von Humboldt Foundation, which he is spending in residence at the Rachel Carson Center in Munich, Germany, and at the Max Planck Institute for the study of the Human Sciences in Berlin, over the summer until 2022. In March 2017 he was be a Visiting Fellow at the Sydney Environmental Institute, University of Sydney, Australia; in 2015-2016 he was the Thomas A. and Currie C. Barron Visiting Professor in the Environment and Humanities at the Princeton Environmental Institute, hosted by the Princeton School of Architecture. He has also held a post-doctoral research fellowship at the Harvard University Center for the Environment and Graduate School of Design, and has been a visiting professor at Oberlin College, Barnard College, and the University of Auckland, New Zealand. In February 2015 he was the Terra Foundation for American Art Visiting Professor at the Courtauld Institute of Art in London.

Daniel approaches research and teaching from an interdisciplinary perspective, integrating narratives and methods from the histories of architecture, art, landscape architecture, technology, science, politics, economics, and environmentalism. He has lectured internationally. Daniel is involved in a number of collaborative and interdisciplinary initiatives: he is part of Mellon funded research project on "Architecture and/for the Environment" at the Canadian Centre for Architecture in Montreal, and works with the Architecture and Environment Interest Group of the European Architectural History Network. He also led a research group on architecture and climate for the Mellon Foundation funded Global Architectural History Teaching Collaborative. Daniel serves on the Editorial Advisory Board of the Journal of the Society of Architectural Historians, He is a fellow at the Penn Institute for Urban Research and at the UPenn/Mellon Foundation project on Humanities, Urbanism, and Design, and part of the Faculty Working Group for the Penn Program in the Environmental Humanities (PPEH).

Daniel's first book, A House in the Sun: Modern Architecture and Solar Energy in the Cold War, was published by Oxford University Press in October 2016. It documents a number of experiments in solar house heating in American architectural, engineering, political, economic, and corporate contexts from the beginning of World War II until the late 1950s. These experiments developed in parallel to transformations in modern architecture, relying on new materials and design ideas for both energy efficiency and claims to cultural relevance. Architects were among the myriad cultural and scientific actors to see the solar house as an important designed element of the American future. These experiments also developed as part of a wider analysis of the globe as an interconnected geophysical system. The solar house was both a charged object in the milieu of suburban expansion, and a means to raise the standard of living in developing economies. A House in the Sun demonstrates that this mid-century solar discourse was one of the first episodes in which resource limitations were seen as an opportunity for design to attain relevance to environmental challenges.

His second book, Climatic Effects: Architecture, Media, and the Planetary Interior  will be published by Princeton University Press in 2019. The book explores climate-focused architectural design methods from the 1930s to the 1960s. In this period, before mechanical heating and cooling systems were widely available, architects collaborated with meteorologists, cyberneticists, physiologists, and others to become experts on climate patterns and their effects. Interest in climate methods was international and robust, and the book examines examples in France, Brazil, Nigeria, India, the United States, and Australia, exploring the work of well-known architects and many not yet prominent in the historical record. The primary objects of analysis are the images that were produced, reading architectural diagrams alongside charts, graphs, and other scientific visualizations to understand the wide-ranging technological discourse of the period. Climatic Effects argues that a new kind of architectural environmental media was disseminated, one that allowed for new conceptual frameworks around the figure of the environment in design, science, and social science, reflecting emergent aspirations in these disparate fields.

Daniel co-edited, with Penn colleague Bill Braham and others, Energy Accounts: Architectural Representations of Energy, Climate, and the Future (Routledge, 2016); he has also recently been the guest editor at The Journal of Architecture for a special issue on Architectural History in the Anthropocene, published in December 2016. Daniel is also editing an ongoing series on Images of Accumulation for the e-flux Architecture platform.

Daniel's essays have appeared in a number of periodicals, including Public Culture, Grey Room, Technology and Culture, The Journal of Architecture, Design Philosophy Papers, thresholds, Delft Architectural Studies on Housing (DASH), Pidgin, and The ARPA Journal and forthcoming in History of Meteorology. Chapters have appeared in a number edited volumes, including: Critical Architecture (Taylor and Francis, 2007), The Ethics of Dust (Verlag der Buchhandlung Walther König, 2009), Architecture, Disciplinarity and the Arts (A&S Books, 2009), Architecture and Energy: Performance and Style (Routledge, 2013), A Second Modernism: MIT, Architecture, and the ‘Techno-Social' Moment (MIT Press, 2013), AGENDA: The Catalogue of the US Pavilion at the Venice Biennale (Zurich: Lars Muller, 2014), Asymmetric Labors: The Economy of Architecture in Theory and Practice (The Architecture Lobby, 2016), Fueling Culture: Energy, History, Politics (University of Minnesota Press, 2016), The Routledge Companion to the Environmental Humanities (2016), Climates: Architecture and the Planetary Imaginary (Lars Muller/ Columbia 2016), and Architecture/Machine: Programs, Processes, and Performances (eth Verlag, 2016). Many of these articles are available as PDFs below.

Daniel has received research and publication grants from the American Society of Environmental Historians, the Society of Architectural Historians, the Graham Foundation for Advanced Studies in the Fine Arts, the Penn University Research Foundation, The National Endowment for the Arts, and the US Department of Energy.

At Penn, Daniel teaches ina nd coordinates the third semester of the required history theory sequences, "Architecture and..." which places architecture in the context of issues of equirt, environment, and economy. He also runs research seminars for PhD and MArch students and works closely with PhDs on their exam preparation and dissertations. Daniel teaches in the undergraduate Architecture program, including a Freshman Seminar on Architecture in the Anthropocene, the development of which was funded by the UPenn program on Integrating Sustainability Across the Curriculum, and a Benjamin Franklin Seminar on Architecture and the Environmental Humanities. In Spring 2015 and 2018 he co-taught Global Cities courses, bringing students to Rio de Janeiro and to Berlin.