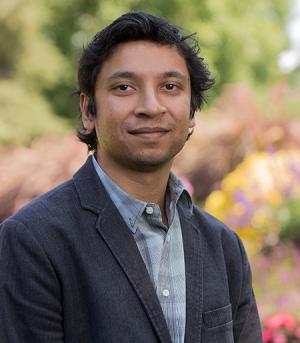 Rahul Mukherjee completed his doctoral studies in Film and Media Studies at University of California, Santa Barbara, with graduate emphases in ‘Technology and Society’ and ‘Global Studies’. His academic preoccupations often meander into imaginings about media’s role with(in) alternative futures for/of politics and technology. He has been a fellow at the Center for the Humanities, Utrecht University and presently Atkinson Center for Sustainable Future fellow at the Society for the Humanities, Cornell University (2017-18). Drawing on the conceptual lenses of cultural studies, media theory, and science studies, he has written on database management systems, advertising cultures of mobile telephony, Bollywood thrillers, development discourses, chronic toxicity, and translocal documentaries. He has been part of two collaborative projects related to mobile media practices: one concerned with the circulation of locally produced SD-card enabled music videos in parts of India and the other exploring ICT usage in Zambia. Rahul’s work has appeared in peer-reviewed journals such as New Media & Society, BioScope, Media, Culture & Society, Television and New Media, Science, Technology and Human Values, Journal of Visual Culture, Communication and Critical/Cultural Studies (with Lisa Parks), and Asiascape: Digital Asia (with Abhigyan Singh), and edited collections like Sustainable Media and Asian Video Cultures. Rahul received the Nicholas C. Mullins award from the Society for Social Studies of Science in 2014. His book project deals with environmental debates about radiant infrastructures (with a special focus on nuclear reactors and cell towers). At Penn, Rahul is part of the Digital Humanities and Environmental Humanities initiatives. Beyond Penn, he is affiliated with the Journal of Visual Culture and the Montreal/Concordia based Global Emergent Lab.