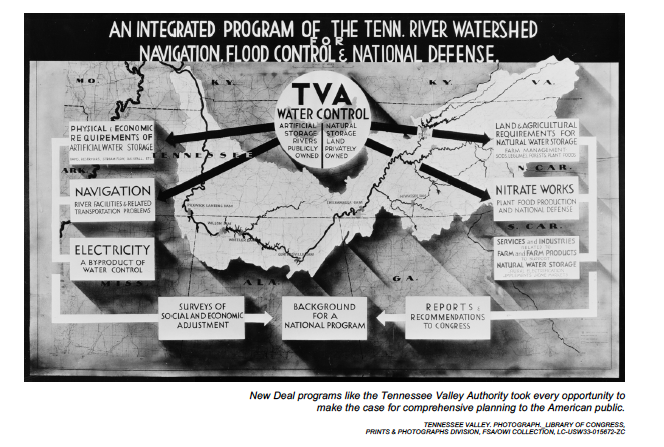 The highly ambitious Green New Deal (GND) proposals being introduced in the U.S. Congress aim to rapidly decarbonize the U.S. economy and remake the country’s energy landscape, while providing well-paying jobs for millions of Americans. While the GND is a radical departure from centralized infrastructure planning and environmental politics, it has its roots in historical environmental, labor, and social justice struggles, including Franklin D. Roosevelt’s “New Deal” programs of the 1930s and ‘40s. This seminar will explore the promise and potential of the Green New Deal through both a critical historical reading of FDR’s original New Deal programs, and through techniques of projective futures and scenario-building. Students will use scenarios to develop inspiring and relevant proposals for aggressively tackling climate change through public infrastructure and planning works. We will spend a part of the course unpacking original New Deal regional roads and trails (iconic New Deal highways), regional dam and power networks (the TVA and PWA), electrical grid infrastructure (Rural Electrification Administration), and large-scale environmental conservation (the CCC). The seminar will also tackle the relationship between government programs and radical social change, and explore the role of design and the public imagination implicit in the Green New Deal.