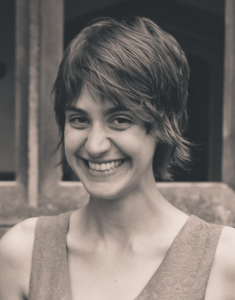 Originally a science student, Aylin moved into literature after noticing similarities between modern environmentalism and medieval philosophy. Now a Ph.D. candidate in English at Penn, Aylin is primarily interested in the relationship between late medieval literature and the history of scientific knowledge about the natural world, as well as the uses of the premodern past in evaluating the current ecological crisis. As a fellow, Aylin plans to contribute to the Field Notes blog and to put their background in community radio to work by creating an online sound map of Philadelphia, featuring human and nonhuman voices from around the city. They are also working on a dissertation chapter about marine systems in medieval literature and science, as well as a series of digital resources designed to introduce nonspecialists to medieval scientific manuscripts. For more information, visit aylinmalcolm.com or follow Aylin on Twitter at @Malentendre.