In this entry, Ben Mendelsohn (University of Pennsylvania, PPEH Mellon Postdoctoral Fellow) discusses the coastal ecology of Lagos, Nigeria. This is the second entry in the Soggy City Series, edited by Martin Premoli. You can read the series introduction here, and Entry 1 (Semarang, Indonesia) here.

Land Making and the Barrier-Lagoon Ecology of Lagos, Nigeria

Lagos, Nigeria is set in the middle of West Africa’s Bight of Benin coastline, amid a “drift aligned barrier Lagoon complex” that stretches from the eastern edge of the Volta River in Ghana to the western edge of the Niger River in Nigeria. In this system, sand is injected into the sea by the Volta River and then transported, deposited, and lifted by waves in repetitive cycles that form thin ribbons of land. Lagos’s tidal channel—a rare break in the region’s barrier islands—was long attractive to traders, as historian Robin Law writes: “The Portuguese were already trading through the Lagos channel with the Yoruba kingdom of Ijebu at the beginning of the sixteenth century . . . although Lagos was not to become major port for the Atlantic trade until the 1790s.” While the channel was convenient, the active littoral sand drift along the coast forced European navigators to negotiate a perilous sandbar that blocked larger vessels from reliably accessing the interior lagoon.  After persistent groundings and the challenge of regular dredging to keep the channel clear, between 1908 and 1920 the British colonial authorities constructed a fateful series of three “harbor moles,” stone jetties that could help regulate this shipping lane. The terminology is revealing, as mole stems from a French word referring to a large physical mass, often of stone; the harbor moles seek to transform turbulent sand and water with piles of granite boulders. These stone barriers do still help keep the channel mostly clear, though without fully taming the environment. The harbor moles also severely disrupt the local equilibrium in longshore sedimentary drift. Since the moles’ construction, Lagos’s Victoria Island waterfront has experienced nearly a kilometer of erosion. 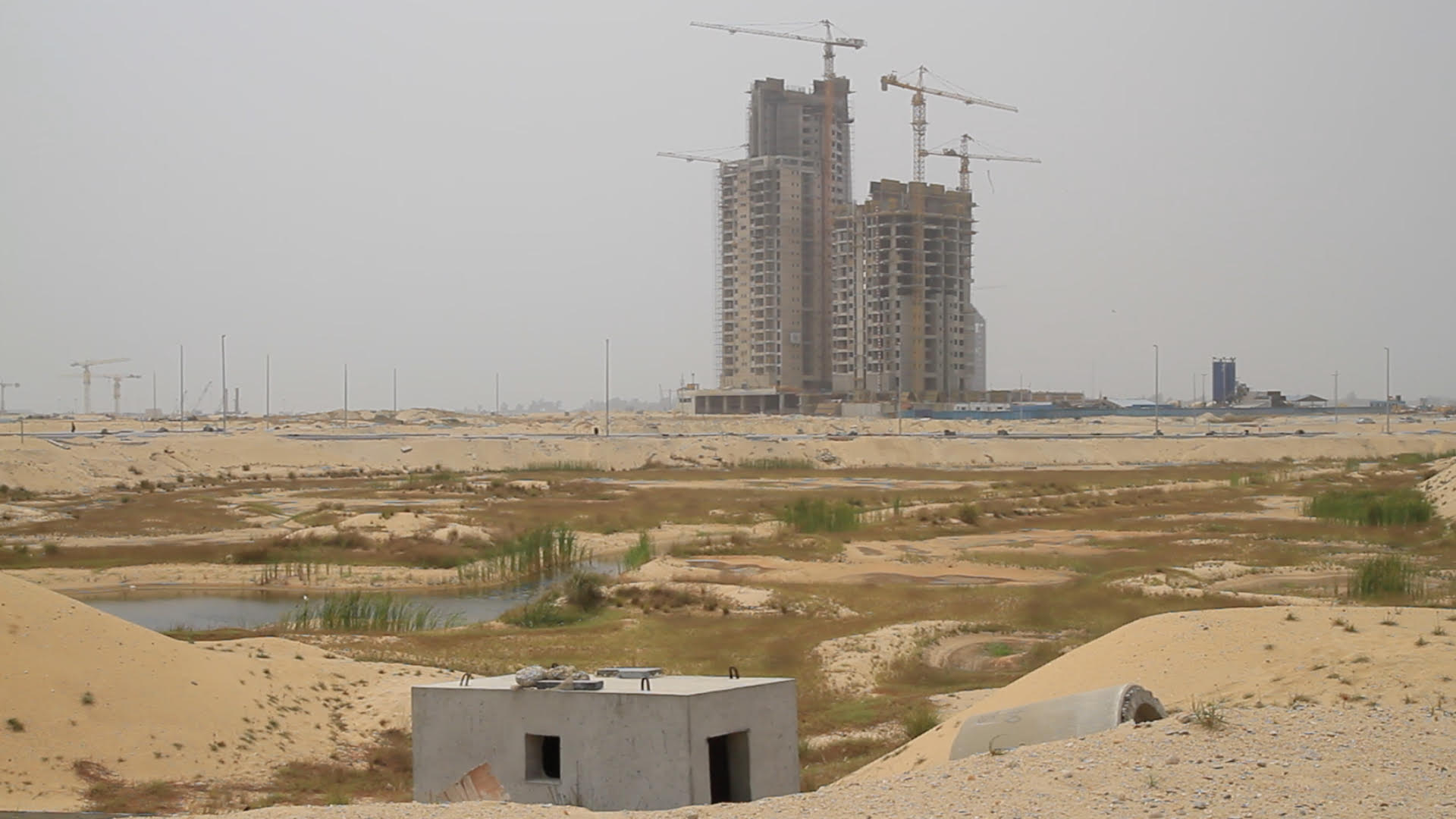 A video still of construction at Eko Atlantic City, an ongoing land reclamation scheme on the Lagos waterfront.

Post independence authorities in Lagos have tried to mitigate this coastal erosion with a series of dredging and nourishment schemes. In the end, the effort became more focused on generating funds than protecting the public waterfront. Eventually, a coastal mega-development called Eko Atlantic City emerged. Eko Atlantic, the highest-profile land reclamation project in Lagos, renders spectacular the widespread creation of land from water throughout the city, even as water periodically repossesses this land. Further, as unregulated land making combines forces with Lagos’s long rainy season, expansive freshwater lagoon, swampy vegetation, high water table, and low elevation, dramatic flood events are now a fact of urban life.5 The anthropogenic conversion of coastal forest and mangrove swamp into solid ground reduces the region’s capacity to absorb, filter, and drain water when it rains. For communities near the ocean, coastal erosion exacerbates the threat. As the journalist Tolu Ogunlesi observed, Eko Atlantic is simply “part of Lagos’s centuries-long fight with the ocean,” but one that has not yet proven to be successful in its aims. 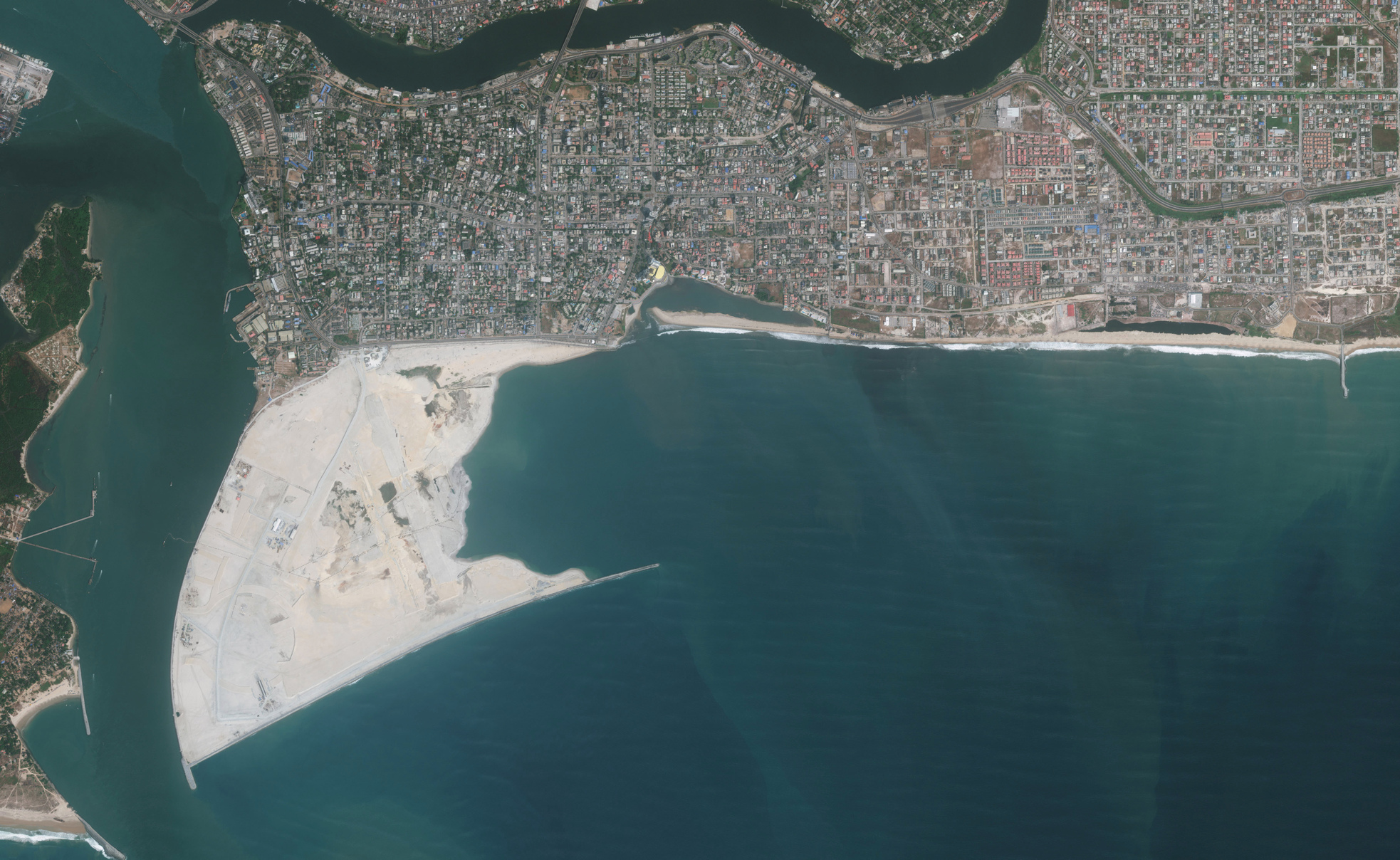 Furthermore, dredging and sand filling are deeply imbricated in class conflicts over forceful evictions, land and housing rights, and the unequal distribution of environmental hazards. Lagos’s future, like most of the world’s coastal cities, is deeply uncertain and poised to be deeply unequal. Scholars estimate as many as 79 percent of Lagos’s residents live within five hundred meters of the coastline. Additionally, as 70 percent of the population live in informal settlements, urban and environmental researchers repeatedly illustrate how flooding “greatly aggravates poverty” and often causes more adverse impacts for women than for men. In many situations, communities of urban poor have settled in marshy or shallow water environments by producing their own land using various combinations of sand, sawdust, solid waste, and ash, only to have this ground forcefully seized for upmarket developments. In other situations, coastal dwellers have merely shifted and rebuilt their homes in response to ongoing commercial dredging activities that dump fresh sand at their doorsteps. These anthropogenic circulations of sediment come to collaborate with the intrinsic geomorphological properties of the region’s barrier island-lagoon ecology.

Excerpted from “Making the Urban Coast: A Geosocial Reading of Land, Sand, and Water in Lagos, Nigeria.” Comparative Studies of South Asia, Africa, and the Middle East 38:3 (2019).