On March 9th, 2020, amid the rise of the COVID-19 pandemic, I sat down with a trio of friends and fellow environmentalists to discuss the state of local fisheries in Bonavista, a small town in the Canadian province of Newfoundland and Labrador. Joining me were Nada Khan, an environmental engineer; Dihua Wei, an architect who blogs for The Punt Premises; and Gerald (Jerry) Hussey, a professional fisher and a pioneer in the region’s emerging sea urchin industry.

Jerry fishes throughout the year, and dives to collect urchins in the winter, when the seawater temperature hovers around 0°C (32 F). A colourful, adventurous, and generous member of the local community, Jerry has also been involved in a range of international projects, from collecting GoPro footage for future National Geographic releases to appearing in an episode of Vice’s Pathways and Palates. Last year, he was featured in the cookbook Wildness: An Ode to Newfoundland, by chef Jeremy Charles.

You can listen to an excerpt from our conversation below, or read on for a transcript. A longer version of this interview is available as part of the Northern Elements miniseries.

Aylin: So when did you get into urchins?

Jerry: We got into the urchins after the cod moratorium – the cod moratorium was called in 1992 because the cod had been pretty well decimated...by everybody. Everybody likes to point fingers at the other person, but everybody had a hand in it. We were taking too much cod inshore as well as offshore. Cod was our mainstay, that’s what we made our money on. And we ended up where there was no cod, so....

We had most of the year with nothing to do, so a bunch of us went in and trained to dive and we wanted to get this industry going here. The provincial government gave us some assistance with the training and things and we ended up basically starting an industry out of it.

Aylin: Where do you sell the urchins?

Jerry: The same restaurants are buying from us year-round. They’re just buying small amounts of stuff, which is – we’re sort of trying to get a market off the ground, and it’s expanding, it’s growing a little bit every year.

Our intent was to form some kind of co-op eventually. We’re pushing sustainable, traceable fisheries that’re not hurting the environment, not hurting the ocean bottom. We don’t use nets or drags. We’re catching everything either in pots or just by handline. We’re handlining the fish with one hook, catching a fish at a time.

The guy that’s moving the product up to Montreal for us, we really work with him – so if he’s got a flight going out, we go fishing early in the morning, we get in time enough for him to pack the fish so he can take it right to St. John’s, it goes on the flight the same day. So they’re basically getting fish twenty-four hours after it was caught.

Everybody’s been pleased with what they get, and they’re willing to pay a much better dollar for it. And they also like that they’ve got a relationship with us. Years ago this wasn’t hardly possible but now with social media and that, I’m sending up pictures for them and they’re showing the people videos of me hauling the lobster pots while they’re eating the lobster that I caught. 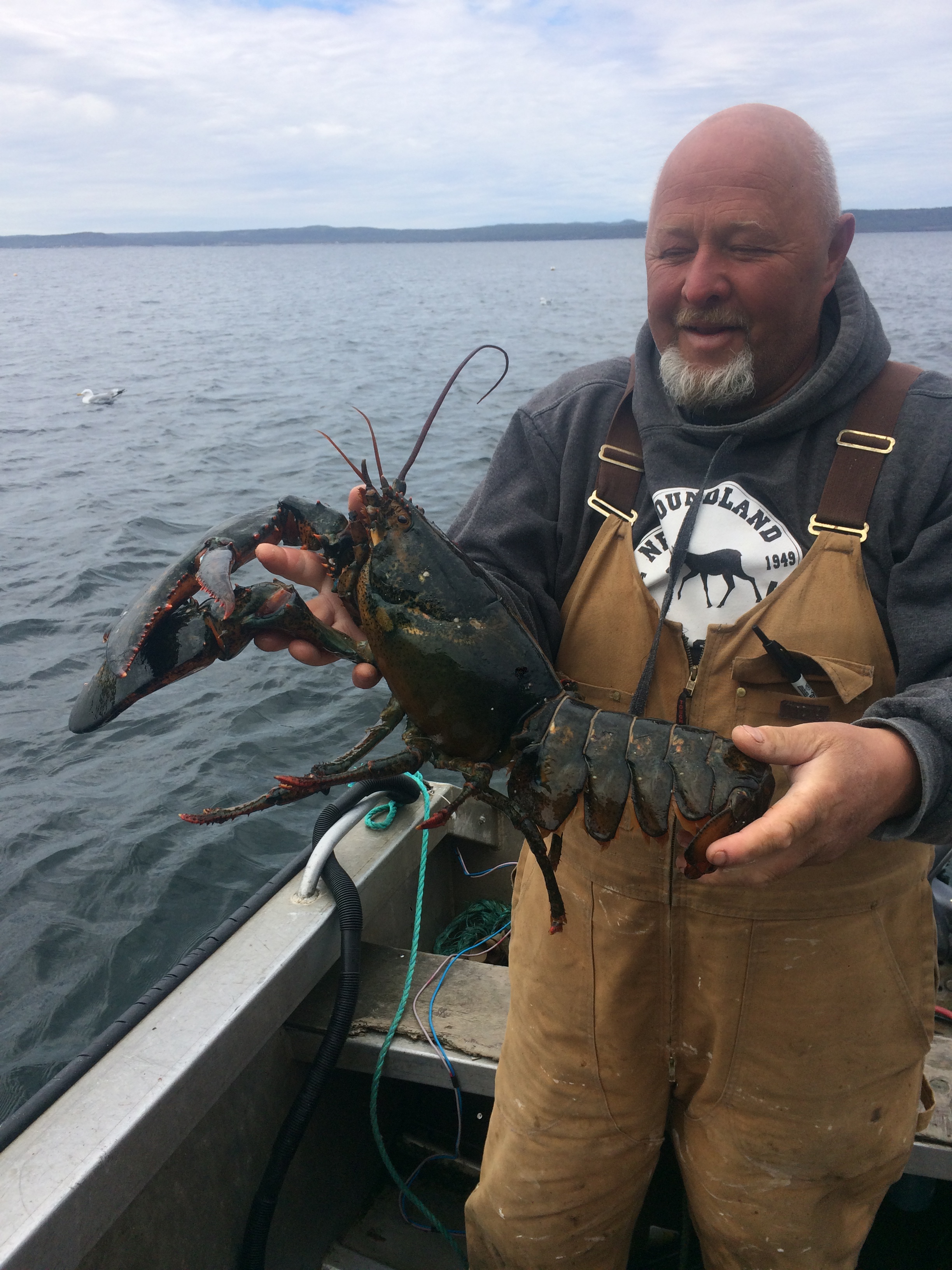 Jerry: I like the freedom to make my own choices. I’m a bit of a – not a contrary person, but I just don’t like people telling me what to do. I can choose when to go and when not to go. I love the outdoors – and I love the water, I’ve always loved the water. Like as a kid, I was a swimmer and I spent all my time in the water. And I didn’t learn to dive till I was 36 years old, but I enjoy it, and I’ll be doing it probably so long as I live.

And there’s a satisfaction…from landing things, I don’t know, like whatever you’re doing…if you’re piling wood or filling a bucket up with blueberries or apples. The fact of gathering things and gathering food and knowing it’s going to feed someone, that satisfies some primal part of you.

We had 500 years of fishing cod and, and the fishermen were – they were never rich, but they were always respected. Somebody who could catch fish – it takes a lot of knowledge, and you’ve got to learn the weather and learn the water, there’s a lot of things you have to know in order to be a successful fisherman. And they did a lot with a smile and just with two hooks, and most of them had no education but they knew wind and tides, and…part of why you turn to fishing, I guess you want the same thing for yourself, I suppose. 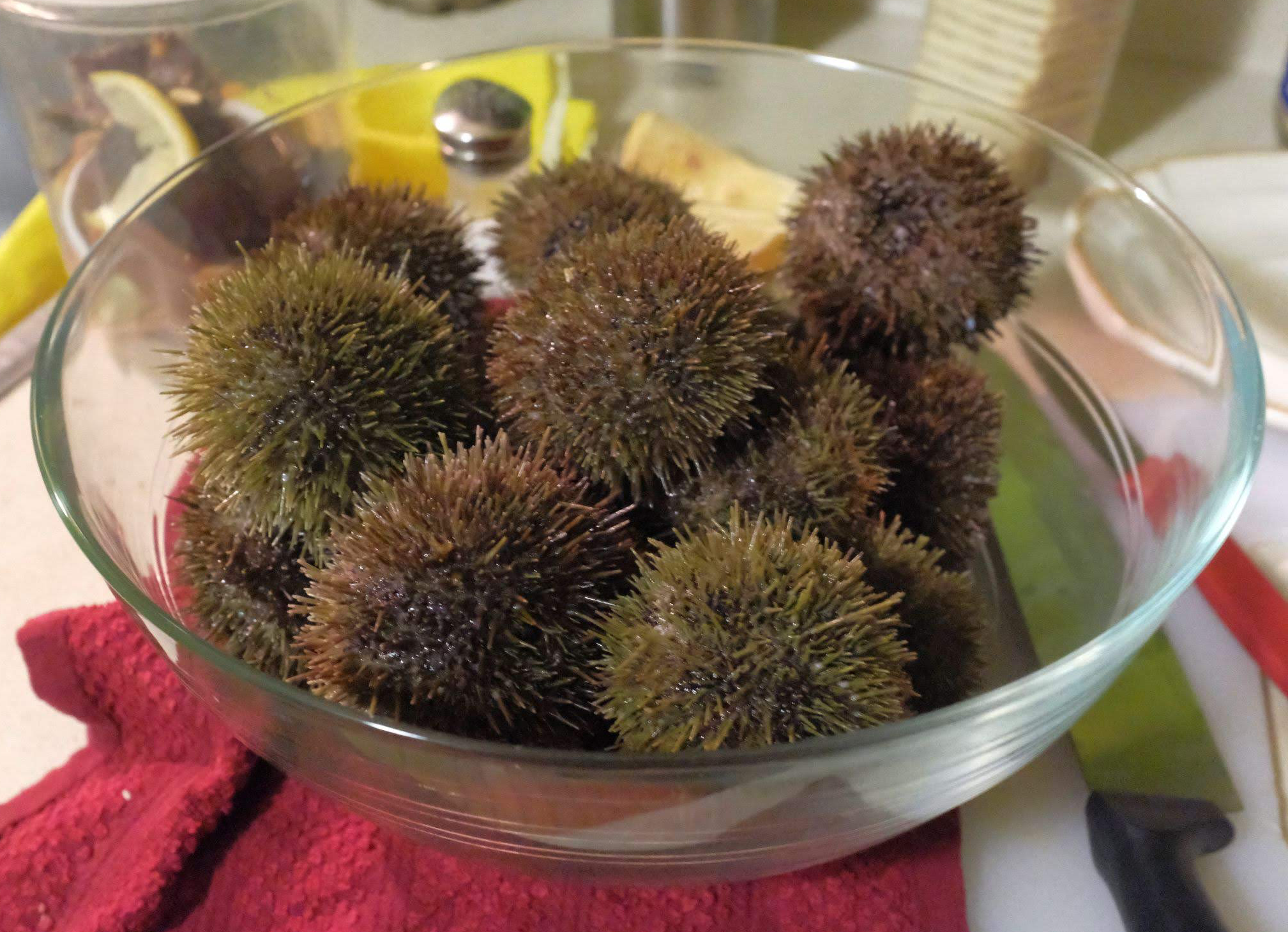 Aylin: Before we started talking, you said that for your children or your grandchildren, there might not be urchins left?

Jerry: No, not that there’s not gonna be urchins, but the volume that’s needed. The urchin has to be a specific size. And it takes some – we’re not even sure, there’s no science done on it – we figure about 15 years it takes them to get to two-inch market size. So what you’d have to do, you’d have to stop fishing certain areas for a certain period of time, allow those inch-and-a-half urchins to get to two inches. When you’re going every year and you’re just picking through ’em and picking the biggest, you’re basically taking next year’s urchins, so…the problem is that if there’s too many fishermen in an area, people’ll take the urchins even if they’re no good, sometimes, because if they don’t take ’em someone else’ll take ’em. So ideally you’d need sections that were closing and opening.

Dihua: How do people know when to stop? It must be hard to….

Jerry: You need somebody to stop you. You need regulations. We’re fishermen but we’re human beings – you’ll take every last fish out of the water if there’s profit in it for you, and people don’t self-regulate. That’s why there’s quotas.

And we’re into the crab fishery now and we’ve had quota cuts the last three years. The stocks are down and they go out and do their science every year and they come back and they tell us the shape of the stock. We’re down to less than a third of what our traditional catch was in the crab. But it’s all to save the stock hopefully, the pay dividends down the road. 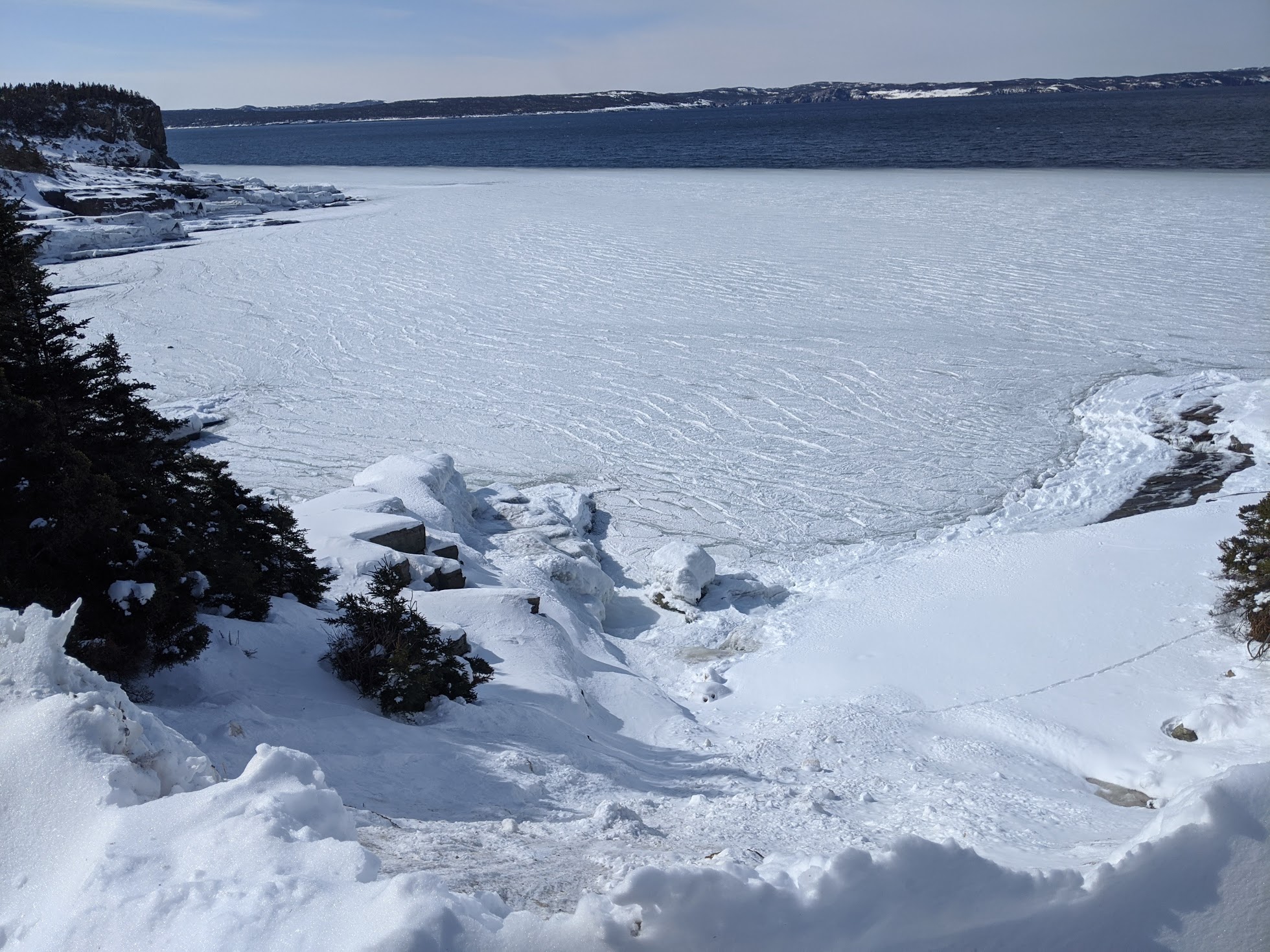 Jerry: Yes, yes. And we have, we have noticed, especially…those areas that we’re fishing urchins, when I was growing up, they would have been frozen solid with at least two feet of ice. And they haven’t froze since. All the areas that we’re fishing urchins, especially the ones where the water slows down up in the bottoms of the bays, those bays would have traditionally been frozen – people going over them with dogsleds or skidoos, and bringing their wood, and now they’re – now they never freeze. I mean, and now there’s not one – not one bit of ice in the harbour at all. So it was quite obvious to us, you know.

Aylin: Right, right. And it’s kind of like…one of your most important businesses now is the urchins. And so that wouldn’t have been possible.

Jerry: That wouldn’t have been possible, no. I know. It’s funny, eh?

Nada: And you were saying before that you’ve been fishing since you were young. What changes have you seen in the creatures…in terms of biodiversity and everything?

Jerry: Yeah, well this was man-made: we watched the cod go from, there was lots of cod, less cod and less cod – down to a point where you couldn’t make a living, all the fish were small. The big ones had been taken.

On the south coast of Newfoundland…we don’t have a really big lobster fishery like they do in Nova Scotia and P.E.I. [i.e. Prince Edward Island]. A catch of lobsters here would be a couple or 3000 pounds for a season. But the lobsters are moving north. On the south coast of Newfoundland last year, those fellows had over 100,000 pounds of lobster, which was unheard of ’til the last few years. So there’s good and bad to everything, innit?

Jerry: Yes, well the waters south are warming, see? So what’s happening is that the people on the southern end there it rains, there’s no lobsters and they’re moving this way.

Same with the mackerel. I’ve done quite a bit of fishing down on the coast of Labrador as well and you hardly ever saw mackerel down there years ago, and now the mackerel is running right up, and…we got a lot of porbeagle sharks here and makos and for years we didn’t see them and now there’s millions of ‘em, and even the b’ys down in Labrador are telling me that they’re seeing lots. 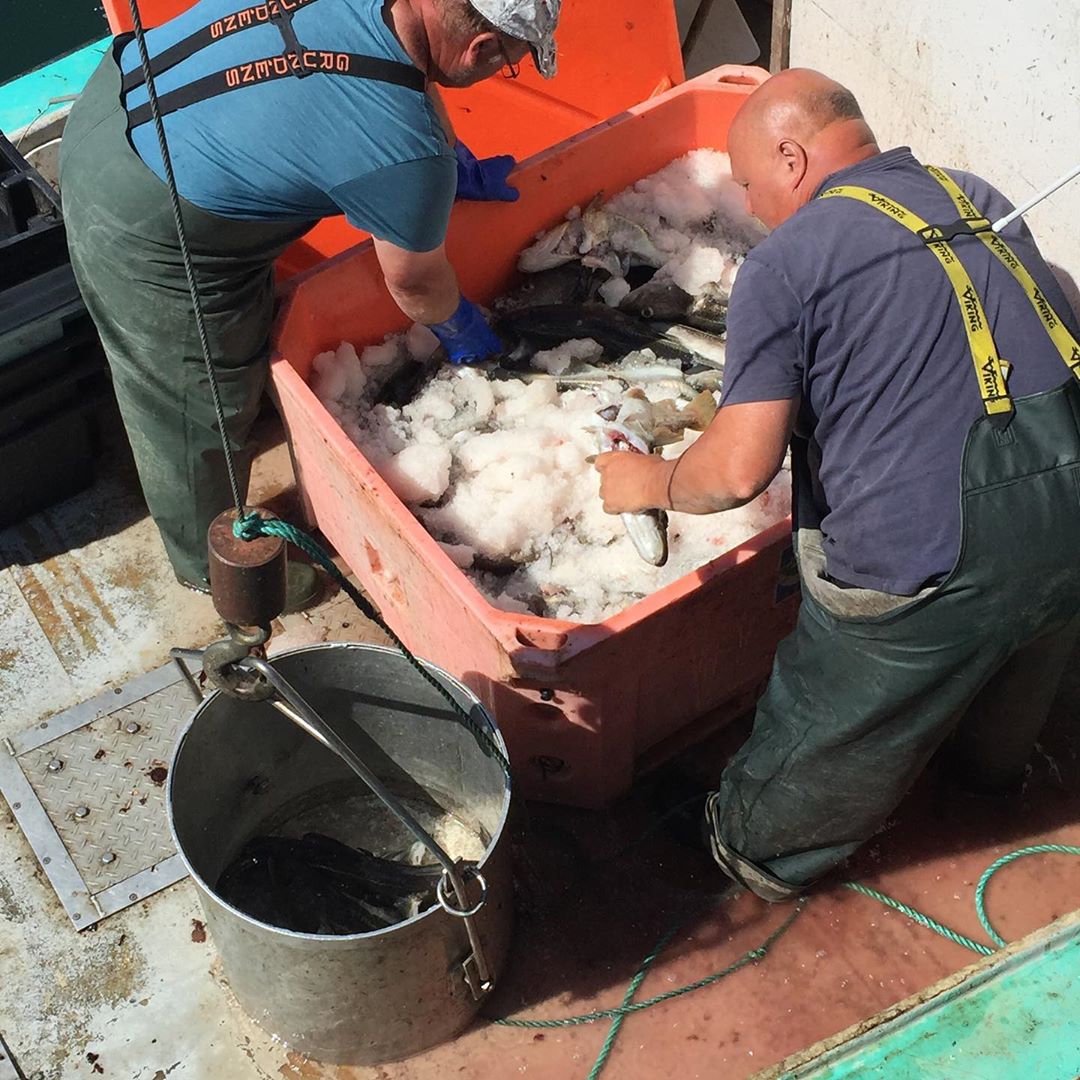 Aylin: What would be most important to you, for people from away, who aren’t from Newfoundland, to know about your life here?

Jerry: I’m proud of who I am and where I’m from. We’re a friendly bunch of people. We’re no different than anybody else – people are all people to me. If you’re raised in a city, it’s much harder to be open to strangers, and leave yourself open and vulnerable to people. But here, we’ve been raised in a hard environment. And the people that survived were the people who stuck together. I mean, when you need your boat hauled up, you needs ten men…if you’re not a nice guy, you don’t have nobody to help you haul your boat up, so. You know, and there’s times when you were close to starving and you had to go and ask a guy for a few potatoes to keep you alive and your family. So you’ve got a sense of sharing and openness.

You know, people come, I’ve taken hundreds and hundreds of people out in the boat and let them catch a fish and…and to see the joy in their eyes, and they go back and you know, I mean all those people, every now and then this thought will cross their mind, you know. And I think that’s a wonderful thing. You got a chance to do that for somebody.