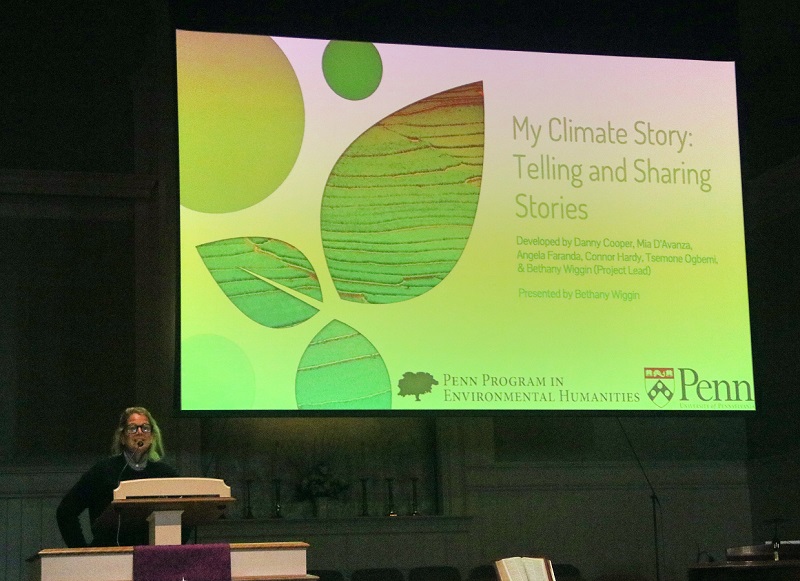 This March, PPEH’s Dr. Bethany Wiggin attended the Chesapeake Conversations: Telling Youth Climate Stories event to present the My Climate Story project and facilitate a climate storytelling workshop with participants. The youth-focused event was organized by Interfaith Partners for the Chesapeake (IPC), a group that works with congregations and people of faith across the Chesapeake watershed.

Afterwards, Dr. Wiggin and PPEH Program Coordinator Angela Faranda met up with IPC’s Outreach Coordinator Katie Ruth and intern Maria Salazar to talk about the event and their experiences sharing climate stories in this way for the first time. The following is an excerpt from our new podcast, The Canopy and has been edited. You can listen to the full conversation at Spotify, Google, Apple!

This conversation was edited for style and clarity.

Angela Faranda: Here in Pennsylvania and around the Chesapeake Bay, where you work, we're starting to do more and more in-person events and we're hoping that COVID allows us to continue to do that, after having spent, what is it, two years now separated from each other? What was it like to sit with people and witness their stories?

Katie Ruth: So for me, I really enjoy listening to stories, it's one of my favorite things to do. I'm the person who sits on the train and starts up a conversation with a random stranger. I didn't participate in any of the discussion groups; I’ll let Maria maybe talk a little bit more about her experience on that. But I think for me, what I noticed as I was walking around to the different discussion groups was less about the content of what was being shared, but [more about] the connection that I was witnessing happening in real time, as people started to hear and understand each other, and share their stories with each other. There was this camaraderie that got built that was really beautiful to watch, both in the sharing of stories and the dreaming of what a different kind of future could be.

Maria Salazar: Kind of adding on to what Katie said, there was definitely that relationship building in the small groups portion. I definitely know that being face to face is so much more different than being on Zoom; I feel like there's this aspect that you cannot get on Zoom that you can get from having face-to-face conversations. And I think being together in those small groups, and just hearing everybody else's stories really brought a sense of not only community, but also of making people realize that this is a real issue. People were sharing their stories from something super small, like, “I'm scared of having my kids to go out because there's so many mosquitoes in the area now. And I don't know what to do, because I want them to go outside and play. But at the same time, I'm scared for their health.” And stories ranging from that to more severe ones, like, “I had to sell my home due to the flooding that was happening in my area.” So respecting that each story is valuable, and each story has their own lesson to share, that was important for us. And we got emotional–I feel like I even got teary at some point. It's that human emotion that we tend to share in group communities.As Dr. Bethany mentioned, there were young people and older people, and people from all different communities are able to come and kind of hear a story that they probably would not have heard if not for this event. So I think that's an amazing aspect of this. 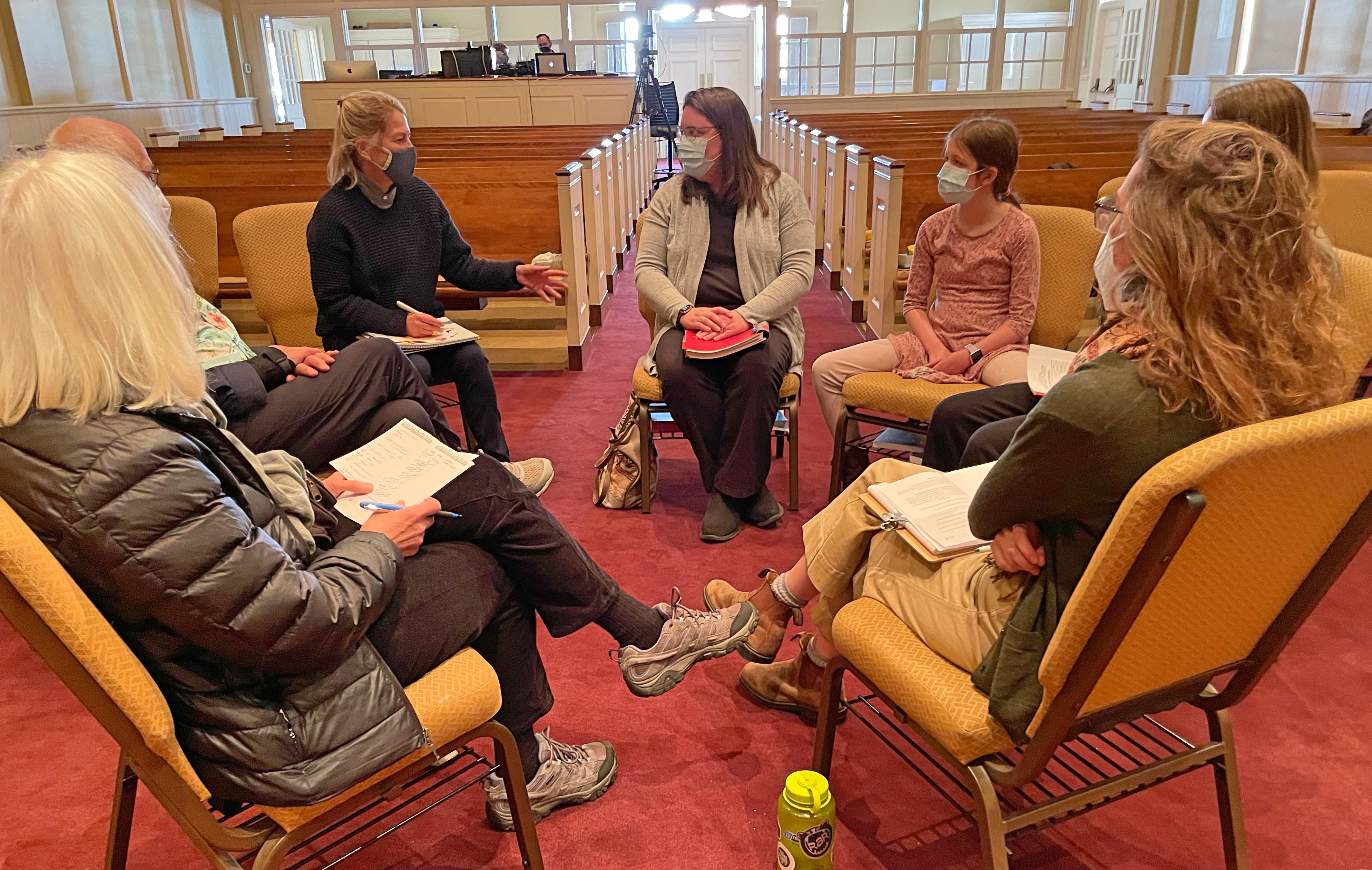 Participants in the climate storytelling workshop gather in small groups.

Bethany Wiggin: I appreciate that sense that you're conveying so beautifully Maria, about what it was like to sit in a story circle, and the power of the emotions that come forward, that can be hard to process. But somehow in a group, it's a little bit easier. You, Katie are one of the very first people who have worked with us to organize an in-person workshop. I thought it went really well. Could you share some thoughts that you might give to other organizers? Just sort of like, okay, here's the experiment that we did. Here's what we learned. Here's some tips for other organizations who might like to offer My Climate Story workshop in partnership with the Penn Program in Environmental Humanities?

Katie: Well my first thing would be to say, do it, absolutely do it. It was a fantastic experience, and one that I would do again, so I would certainly recommend the partnership building for sure. I think one of the most important things that I learned, and this is something that I think I brought with me before the My Climate Story workshop, but having some guides for conversation can be a really helpful way to start. In our facilitator guide for the workshop, I provided just a short list of some different guides for conversation, like “We commit to using inclusive language when we talk to each other and respecting each other's shared experiences or the differences from the places that we come.” So having some kind of group commitment to the way we're going to approach storytelling is one of the things that I got feedback on from facilitators, and was really helpful as we started the sessions together. Make sure that you just check in with your facilitators, so that you can provide them with the tools and resources that they need so they feel supported to have those conversations–especially if emotions arise. You want to make them feel equipped to deal with those kinds of things, so that's really important. And then I think you want to be intentional about who's in the room. So for our particular event, we really wanted to focus on and empower youth voices, and we were also really intentional about trying to make it an intergenerational event. So as I was setting up the discussion groups, based on who was in the room, I tried hard to create groups where there was some of that intergenerationality happening so that we could have conversations that span generations together. Those were some of the things that I was thinking about that might be helpful for others as they look to facilitate their own climate conversations. 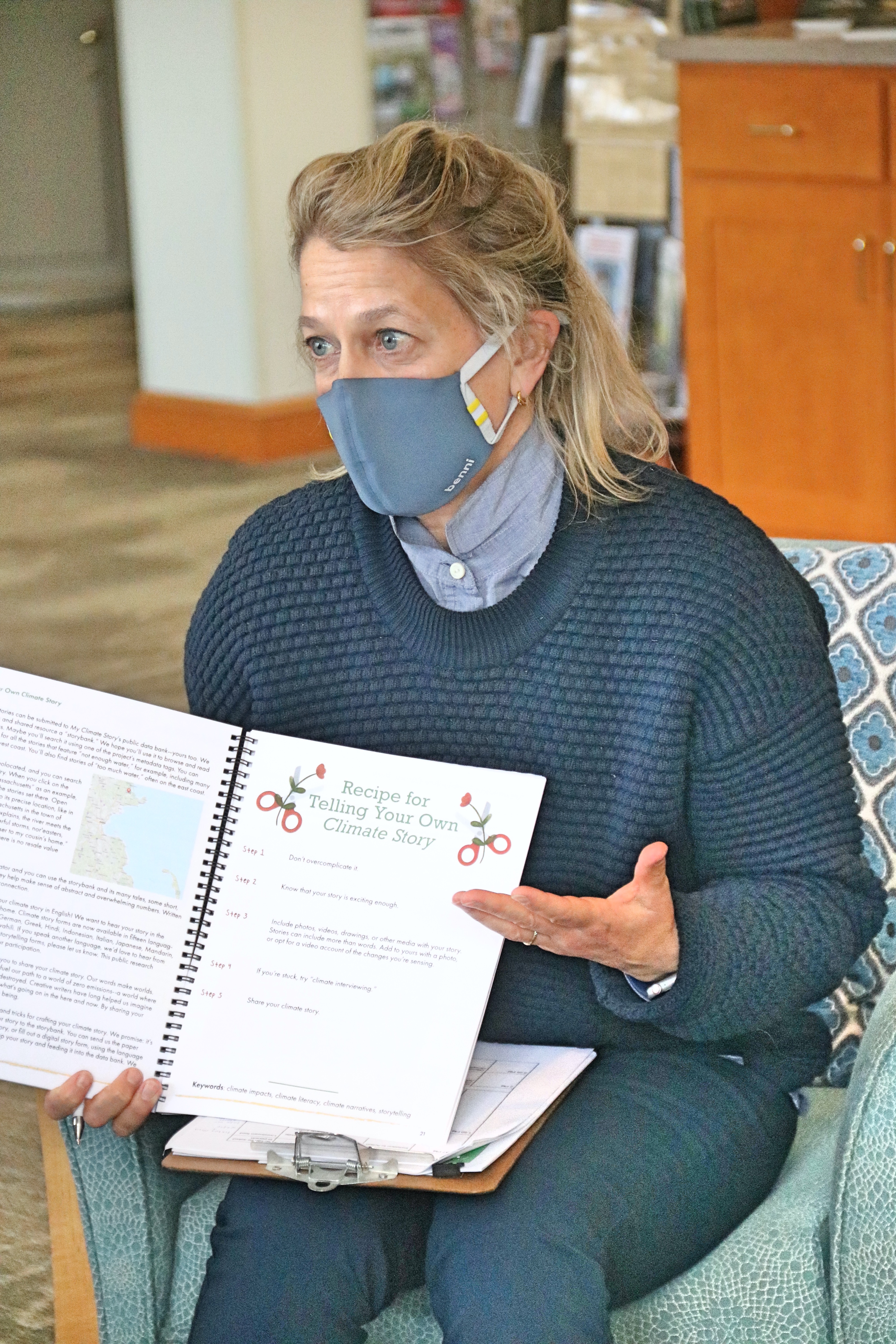 Dr. Bethany Wiggin talks participants through the "recipe" for telling your own climate story, using the MCS Workbook (available for free at my-climate-story.org)

Angela: Was this the first time that you have had conversations specifically about climate and your feelings around climate change with other people? And if so, what kinds of conversations have you had that felt like they were important transferable skills to have this conversation?

Katie: That's a really, really good question. I think, for me, I enjoy facilitated conversations a lot. And I participate in them a lot. I'm in a master's program, so I'm often sitting at a table with one person leading a discussion or multiple people participating. I spend a lot of time doing roundtable discussions around social justice. And a lot of those skills kind of transferred very nicely over into this. Anybody who knows me well knows that I'm always talking about the intersections of climate and feminism, and social justice work and how people can get involved. I never stop talking about it. So I think it's kind of funny that you asked if I'm, if I've had those conversations before, because everyone's like, “Oh, there goes Katie again, talking about the climate.” But I think this is the first maybe formalized conversation that I got to witness which was different. The informal conversations are important, right? The conversations we have with our neighbors and our friends, those are really important, but also having time where we come together to very intentionally explore themes or share our own stories feels really important and powerful.

Maria: For me, personally, same as Katie, I've never really had a formal group discussion around climate. I think most of the discussions that I've had around climate change have been through personal experiences. At my church there's a lot of people that migrate from Mexico because there wasn't enough water in their land to be able to sell their crops. So I think personal experience is what I've been discussing, but having a formal group meeting where people can share their different stories–I've never had that experience before. And it came very naturally, in a way, where people were able to bring their previous experiences to the table. I kind of see it like a potluck, where everybody brings their own dish and everybody just kind of takes a piece of that, and goes with what they've learned.

Bethany: I love that you think about it in terms of food and sharing. When we created our workbook, with these lessons about how to tell your climate story or other forms of climate stories, such as climate interviews, or stories of species or animals other than humans, we actually really wrote that in terms of recipes. Like we thought about food and sharing all the time. And part of that, I think, is that there's such pleasure in sharing food. And that helped us think about the power of sharing stories as well. And we also thought, well, some people are gonna say “I don't have a climate story. I'm not an author, I don't have a story.” Much like people might say, “I'm not a chef”. Well, but you do cook, and you can follow a recipe. So we really wanted people to understand that they, in and of themselves, already have all the ingredients that they need to follow a recipe to produce a simple climate story. And if they then want to, you know, kind of embroider on the story, or make it more artistic or pair it with multimedia materials, they absolutely can do that. But that what they already had was enough, in order to have a story.