Writing Stories Into the Garden, Part 2

This post is the second of three in a series of discussions between historian Miranda Mote, a fifth year PhD candidate at Penn in the Weitzman School of Design, and archaeobotanist Chantel White of the Penn Museum.

In this entry in the series, Miranda and Chantel continue their conversation about Francis D. Pastorius’ (d. 1719) Germantown garden, the subject of Miranda’s dissertation. Read on to learn about how botanical excavation, evidence like Pastorius’ plant prints, and personal herbaria like Emily Dickinson’s can help us understand gardens that are no longer extant.

For other posts in this series, edited by Mia D’Avanza, see Part 1. The third entry will be posted in the coming weeks. 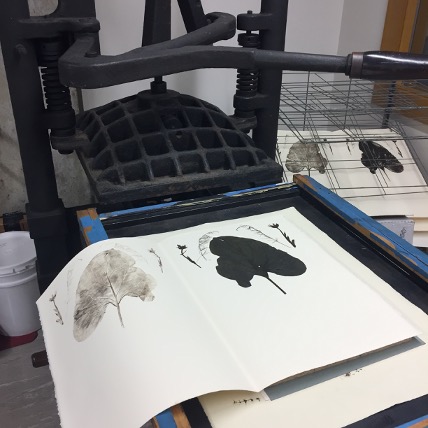 Miranda Mote: So I guess another thing that I think about is technology because Pastorius arrived in Pennsylvania with a trunk and a very modest amount of tools. I was curious to know about the long history of gardens in terms of technology. What technologies do you think have changed the garden the most since antiquity? And changed how gardens were made, or what the meaning of that garden was?

Chantel White: I think I could give a very long answer to this question, but there's a few things that come to mind. Certainly irrigation technologies and manuring practices have been important to gardens, both for improving soil health and increasing water availability. These conditions would have allowed non-local plants to flourish alongside native plants as people increasingly managed garden systems. Along this line, I think we should also consider the movements of plants across the landscape. As communities were interacting with one another and trading goods and knowledge, they may have also gained access to non-local plants and learned how to successfully cultivate them (such as grapes along the Dead Sea!).

We can also see changes in the plants themselves-- the domestication process in which people were selecting for certain traits. If we think about plants 10,000 years ago, they do not look exactly the same as they do today. In the archaeobotanical record, there is long-term evidence of people choosing which attributes they're interested in continuing and cultivating those traits, such as larger fruits, fewer seeds, and probably increased sweetness.

MM: We spent a lot of time talking about the plants that Pastorius was cultivating when we looked at all of his plant lists. He definitely was importing plants from the European continent and conscious of the environment (the new environment that he was living in in Pennsylvania). He also recorded instances of plants that he discovered in the woods. But what has become clear to me is that even though he was not a gardener per se in Europe, he had visited several botanical gardens in Europe and they all had global collections of plants and so he would have been aware, particularly of the, what he calls the Indian corn, even before he arrived in Pennsylvania.

His experience cultivating Indian corn was certainly affected by his relationship with the Lenni Lenape. He talks about observing them cultivate plants in a very particular way that was very different than what he would have known in German culture. This surely would have influenced how he cultivated Indian corn. So that's a cultural interaction that would have affected how he would have cultivated corn in his own field or garden, which is kind of interesting.

So another question: I embarked on this project knowing that nothing physical remains of Pastorius's garden. All we have is his writing about it and I don't even have a drawing of his garden per se, but what I do have are prints of plants that he made from his garden. I spent a lot of time with them and I began to realize that they are botanical evidence of the plants that he cultivated in his garden. They are historical sources but they are also artifacts in themselves, much like his garden was, in his mind, was an act of making art, so I guess I am curious, can you think of any other examples similar to that? Where you have excavated a garden and had material evidence like writing or even drawings of a garden and were able to interpret that together later? 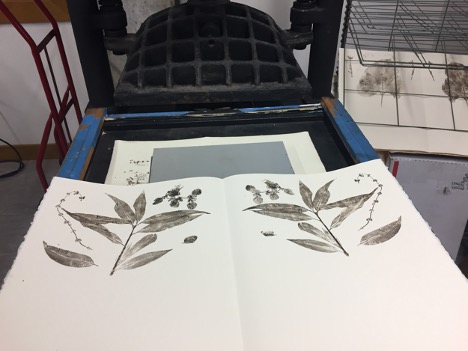 CW: Well, I think the prints that you've been studying are really fascinating. Since I usually work with plant evidence at the microscopic level I think I’ve developed a somewhat narrow idea in my mind of what constitutes an archaeobotanical record. When you showed me Pastorius’ plant prints, I initially thought “Oh, these are interesting” - and then it really hit me that this was an entirely different sort of archaeobotanical record. On archaeological sites, we often find just tiny bits of nut shells or fragments of seeds. The prints have full depictions of various plant leaves. Leaves are so fragile that they rarely survive at archaeological sites, so the prints offer a whole new set of botanical information. It shows me too just how broadly we need to think about the preservation of plant evidence from the past.

One garden that comes to mind is a project that my students and I worked on a few years ago, a study of archaeobotanical samples from the garden of poet Emily Dickinson from Amherst, Massachusetts. We were able to look at some of the historical documents and learn about the plant species that she mentioned in her poems. She had created her own herbarium at the age of 14, I believe, so we were able to see the exact plant species she had actually pressed into her herbarium. We also examined letters that Emily Dickinson sent to family members and the sketches from her niece as to what the property once looked like.

Emily Dickinson was known in Amherst as a wonderful gardener, so when we were examining the archaeobotanical samples, we were also trying to match up our identifications with the plants mentioned in these historical documents.

We found a few species that we thought might have corresponded. We haven't finished analyzing all of the samples, but we did identify grape seeds, which have an interesting story. Letters and documents indicate that Emily Dickinson’s mother had been a well-regarded gardener too, and she had several different varieties of grapes growing on a trellis near the barn on the property. When we found the grape seeds, it felt like a direct connection to the Dickinson family and their garden from 150 years ago.

MM: So because Emily Dickinson occupied this property for nearly her entire life, and her family too, you have a multi-generational view as to what that garden meant to many people.

MM: I visited Amherst and Emily Dickinson’s home, there was very little of this garden that remains, so I assume that the institution is thinking long-term about a reconstruction of the garden?

CW: I believe so-- it's a privately owned house museum, but they were working with the University of Massachusetts Amherst and their affiliated archaeological center. The archaeological team was carrying out some limited excavations looking for remnants of Emily’s conservatory and the garden before a restored garden was created on the property.

*All plants in these prints were listed in Pastorius’ Artzney und Kunst (ca. 1696) as medicinal plants, and harvested from Bartram’s Garden.